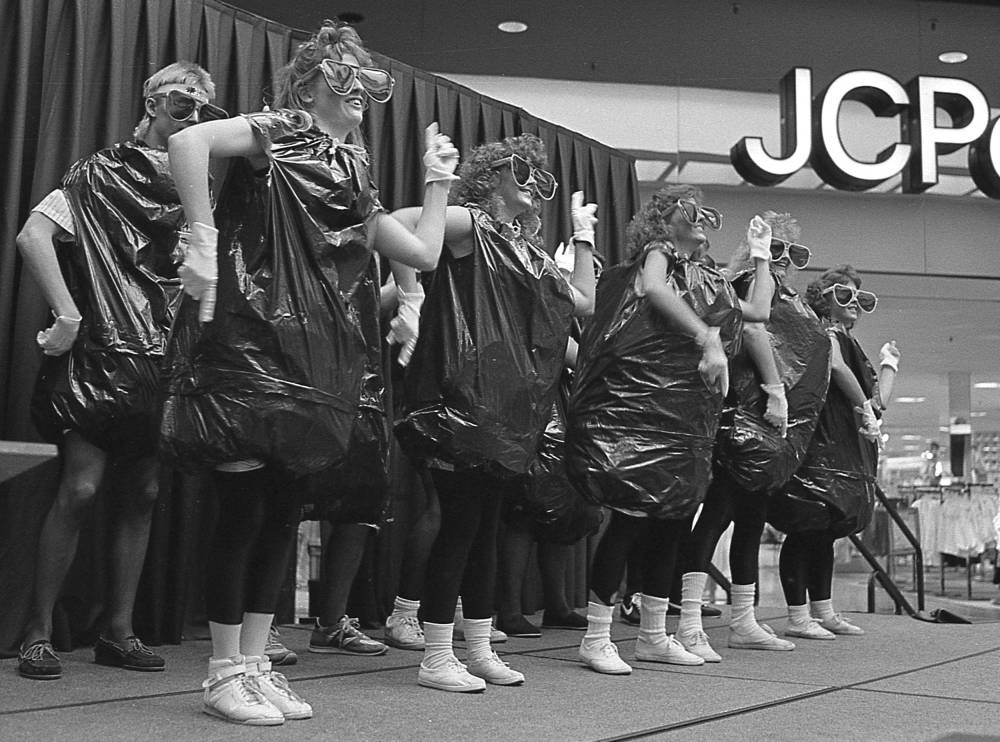 ABOVE: Vision 2000's rendition of the dancing "raisins" of TV-commercial fame served to usher in the start of Tuesday night's public meeting on Cape Girardeau's strategic plan. The plan involves about 100 strategies dealing with everything from education to planning and zoning. Implementation of the plan is to begin this fall. BELOW: Harry Rediger, a member of the Vision 2000 steering committee, speaks at the public meeting. (Mark Sterkel photos) 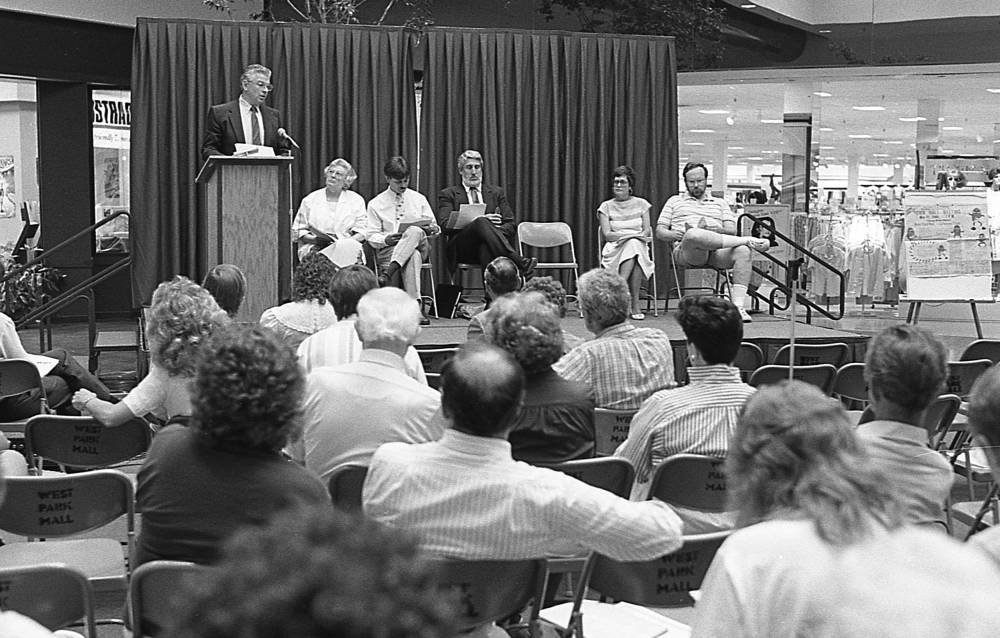 CAPE GIRARDEAU - Dancing "raisins" and a song composed to the tune of "I Heard it Through the Grapevine" served as harbingers for a public meeting on Cape Girardeau's new strategic plan Tuesday night.

The plan, which was developed over the past year by the 73-member Vision 2000 Committee, was discussed via a question-and-answer format at a "town hall" meeting at the J.C. Penney Court in West Park Mall.

About 80 people attended the meeting, which lasted slightly more than an hour.

The meeting began with Vision 2000's rendition of the "dancing raisins" of TV-commercial fame. The "raisin troop," consisting of 10 men and women, including Vision 2000 members and SEMO University Sundancers, was costumed in garbage bags; over-sized red, yellow, blue and purple sunglasses; and white gloves.

Vision 2000 chairperson Linda Cochran stressed that implementation of the plan, which should get under way this fall, depends upon efforts of individuals, citizen groups and businesses.

She said she would urge interested citizens and groups to get behind the strategic plan by adopting one of the strategies mentioned in the plan and helping to implement it.

"This is an ongoing program to the year 2000," noted Vision 2000 steering committee member Harry Rediger.

"We can get a running start when we go to the polls next week," suggested Rediger, noting the Vision 2000 Committee is urging voters to support a proposed 48-cent hike in the public school levy.

Cochran pointed out that while the costs associated with the various strategies have not been determined, it is envisioned that most of the strategies will be implemented by various groups through private funding and donations.

"Very little, if anything, will we be asking to fund through taxes," she stated.

Many of the planning and zoning strategies could be undertaken by the city with existing city staff, said Vision 2000 Planning and Zoning Task Force Co-chairman Joe Buerkle.

In fact, he noted, a number of planning and zoning strategies are already contained in the city's comprehensive plan.

Several of the strategies highlighted at Tuesday night's meeting were mentioned in the Vision 2000 song.

I bet you wonder how I knew / about Vision 2000's plan for me and you / a citizen's plan that will really score / with more voter registration Cape will really soar.

"We're proposing the appointment of ward captains (to help get the vote out in each ward)," explained Bowman.

A key part of the plan calls for a 10-year beautification effort involving the planting of red roses along various entrances to the city.

It is envisioned that red roses and white clover might be planted along that stretch of highway to help "showcase Cape Girardeau," Rediger said.

He noted that at numerous public meetings, citizens have repeatedly suggested efforts be undertaken to beautify the city with roses.

Cape Girardeau resident Peggy Nelson suggested that the Vision 2000 plan should include an effort to eliminate billboards.

"We need to get rid of the billboards; they are trashing our town," she remarked.

With more jobs Cape will really grow / and a business incubator can make that so / so our plan addresses that you see / and you know it means so much to me...

Pauline Fox, co-chairman of the Business/Industry/Jobs Task Force, said the plan includes efforts to obtain a state grant to convert the old Wal-Mart building into a business incubator which would house small, start-up businesses at low rent.

The businesses would share secretarial services and could obtain various business and marketing advice through SEMO University and other agencies.

A lot of people are waiting to see / the preservation of our history.

One of the goals of the strategic plan is to develop an historic district by July 1990, which would include the riverfront and surrounding area.

Buerkle said the planning and zoning portion of the plan also calls for updating the city's building codes and making buildings handicapped accessible.

One woman at Tuesday's meeting told of finding a handicapped accessible restroom stall on the second floor of a Cape Girardeau building. The only problem was that the building contained no elevator, making it difficult for handicapped persons to get to the bathroom, the woman said.

"A large number of people are concerned about buildings having handicapped facilities. We think our building codes need to be brought into the 21st century," noted Buerkle.

Here's something that won't cost a ton / learn to read through Each One, Teach One. Don't you know I heard it through the grapevine / the Vision 2000 plan is really mine...

In the area of education, Task Force Co-Chairman Jeff Krantz said the plan attempts to address the illiteracy problem through establishment of an "Each One, Teach One" program.

The program would involve the use of volunteers to teach individuals on a one-on-one basis. The plan calls for it to be implemented by November 1989.