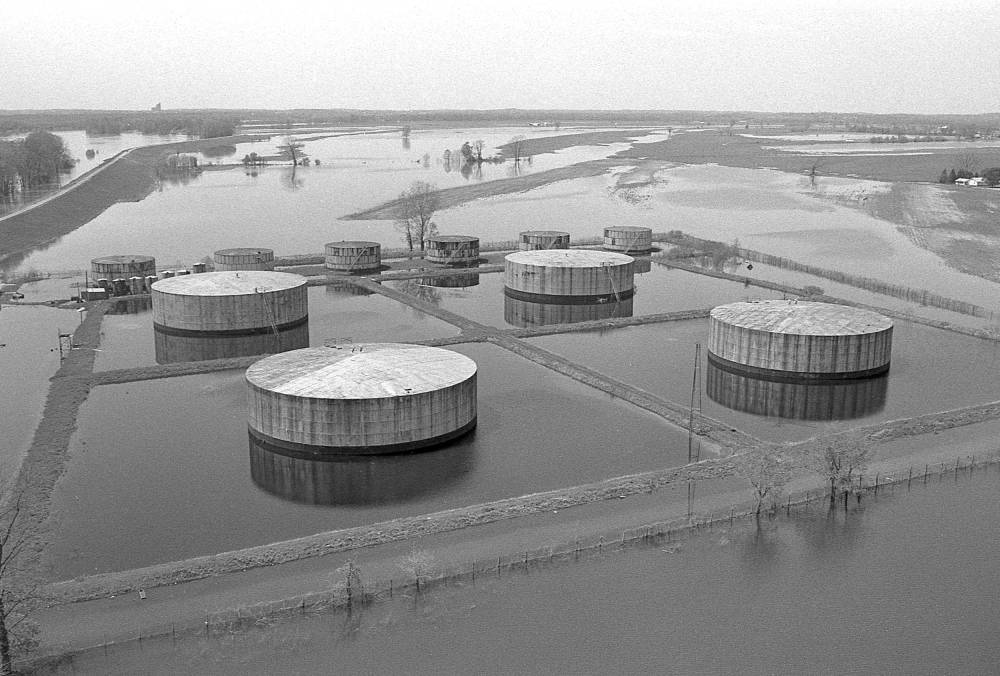 The flooded Ilada Energy Co. plant between East Cape Girardeau and Gale, Illinois is seen in this aerial photograph in early May, 1983. Officials of the East Cape Girardeau-Clear Creek Levee District are concerned one or more of the tanks might float off its foundation, releasing PCB-laden waste oil into the flooded area and ruining cropland. In 1942, the federal government built and operated a tank farm at the site. The tanks were used to store aviation fuel during World War II. Several companies operated the tank farm until 1981 when Ilada Energy Company took over operations. (Fred Lynch photo)

Ilada clean-up will begin next week

GALE, Ill. - Work is expected to begin next week for the privately-financed removal of over 1 million gallons of contaminated industrial solvents, waste oil and water from the now-defunct Ilada Energy Co. plant.

The site is located near Gale, in northern Alexander County, Illinois, about eight miles southeast of Cape Girardeau.

The Illinois Environmental Protection Agency announced Wednesday that it will oversee the first phase of the project, which is expected to take six to eight months to complete.

The second phase, which will include long-term environmental monitoring of the site, will last about 18 months, said Dr. Stan Black of the Illinois EPA.

Black explained four private companies have joined together in a cooperative agreement with the United States and Illinois EPA to remove nearly 1.5 million gallons of waste oil, sludge and water from 22 storage tanks at the site.

Those four firms are the only companies that have agreed to cooperate out of a list of parties believed to have some legal responsibility for the site under the U.S. Superfund laws.

The problem was first detected eight years ago after federal and state EPA officials raided the Ilada Energy Co. oil recycling plant in 1982, and discovered used oil that was contaminated with PCBs, believed by some to be a carcinogen.

The plant was ordered shut down, triggering a prolonged bout of litigation as to who would pay for the removal of the tainted oil, and treatment of water that was later pumped into the storage tanks to stabilize them during flooding in the mid-1980s.

The EPA said Ilada Energy's operator, Larry E. Wilson, apparently left the state when the site was abandoned in 1983.

The issue was finally resolved last year when the four companies agreed to cooperate in a joint-cleanup project.

Much of the material being removed is said to be contaminated with PCBs and toxic heavy metals.

Black said removal of the contaminated oil and water will eliminate the threat of a sudden release of the contaminants from the site due to flood, fire, or failure of a tank or valve at the site.

He said administrative office trailers and equipment trailers will be moved to the Ilada site as soon as the underbrush is cleared out.

That work will begin this week.

As soon as the support equipment is moved onto the site, Black said the actual removal of the sludge, oil and water will begin.

"During this first 'removal' phase of the project, over a quarter of a million gallons of waste oils and over 16,000 gallons of sludge will be removed from the site's tanks and treated or disposed off-site according to their level and type of contamination," said Black.

"In addition, more than a million gallons of water in the tanks will be treated on-site to remove contaminants, then tested to assure that all environmental standards are met before our agency will approve discharge into the Mississippi River, near the Ilada site."

Black emphasized the treated water discharged into the river will be free of all solids and oil, following carbon filtration to remove the chemical contaminants.

He also noted both U.S. and Illinois EPA inspectors will be at the Ilada site while the treatment operation is going on to make sure it does not pose any threat to fish, wildlife, or drinking water downstream on the Mississippi River.

"Government environmental agencies will maintain daily oversight throughout the entire removal effort, both with Illinois EPA on-site staff, and with representatives of our environmental contractor, Ecology and Environment, Inc., of Chicago, who will observe every day of on-site activity," Black stated.

After the waste oils and water have been removed from the tanks, Black said the project will conclude with the cleaning and removal of the steel storage tanks and associated piping and the removal of visibly contaminated soils for disposal at approved off-site facilities.

Phase Two of the Ilada cleanup project will involve a long-term environmental investigation of the nature and extent, if any, of soil and ground water contamination at the Ilada site, and to determine the best way to eliminate the problem.

Black said the four companies involved in the removal operation have also signed a "consent agreement" with the U.S. and Illinois EPA, promising to carry out this long-term investigation and remedial action to solve possible remaining environmental problems at the Ilada site.

The Ilada site was proposed for the U.S. Superfund list in June 1988, and was formally added to the National Priorities List in September 1989.

But Black noted with the consent agreement with the four companies, the work will be funded privately, and not by the taxpayers.