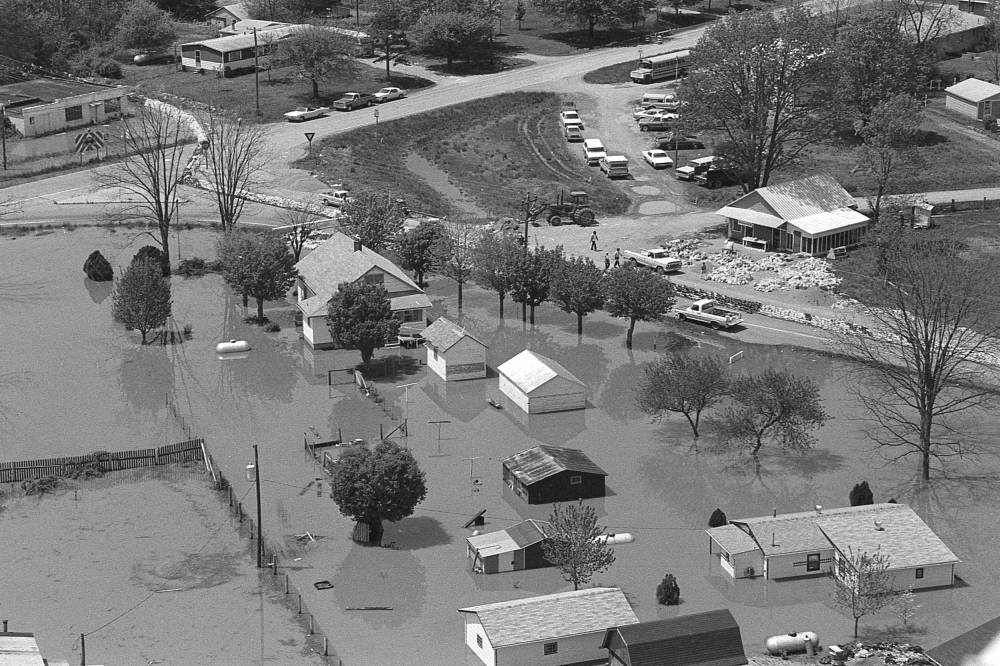 Flood waters surround several homes in the Dutchtown area which were not protected by the sandbag levee going up on Highway 74. The Mississippi River was expected to crest today, but area disaster officials said the forecast of possibly heavy rain on Saturday could prove disastrous for the flood-ravaged areas of Southern Illinois and Southeast Missouri. (Fred Lynch photo)

No problem for now, but rain in forecast

With the Mississippi River expected to crest here late today at 45.3 feet, the situation has stabilized in the flood ravaged areas of Cape Girardeau and the county. But with rain, possibly heavy, forecast for Saturday, things could get worse, D. Brian Miller, Cape County disaster operations director, said this morning.

"The situation is stable at this time. There is no major problem showing right now," he stated.

But he noted, the big concern now is the possibility of heavy rain Saturday, which could cause serious problems in the flood-stricken areas where the ground is already saturated.

"Our greatest concern at this point in time is that heavy rains will come in here. If we were to have a two-inch rain over the area, it would really be disastrous," commented Miller.

As of this morning, the river at Cape Girardeau stood at 44.9 feet. "We're awfully close to a crest right now," noted Miller, who added there is a possibility the river might crest below the 45.3 stage.

Cape Girardeau City Manager Gary Eide said that the river stage was holding at around 44.9 this morning. "That may be a crest. We may be cresting out a little early and a little low," he noted.

According to Eide, the biggest concern right now is the possibility of rain in the area late tonight and Saturday.

He noted that the swollen river has backed up into area creeks and heavy rains this weekend could cause flooding in the city's west end.

The Mississippi River remained closed between Cairo and a point about 20 miles south of St. Louis, Eide said. U.S. Coast Guard officials met with city and county disaster officials today and announced that some Coast Guard crews may be locating here later today, according to the city manager.

"We've had no security problems in the flooded areas," Eide said.

No looting has been reported in the flood-stricken areas of Cape County or the City of Cape Girardeau since the County Court imposed a dusk to dawn curfew in the flood ravaged areas of the city, Miller noted.

No arrests have been made under the curfew order, although Cape Girardeau police reported chasing away a few persons from the flooded areas of the city, Miller noted.

The high water may have been responsible for the death of a 31-year-old Kennett man, who was found dead late Thursday night in his partially submerged car in a water-filled ditch six miles east of Kennett, the Missouri Highway Patrol said.

The victim was identified a Christopher Scott, Jr. Authorities said the incident apparently occurred between 9 and 11:45 p.m. when he apparently lost control. The vehicle struck a bridge railing and plunged into the water-filled ditch.

There have been no flood related accidents reported in Cape County.

Miller said volunteers worked until late Thursday building up the sandbag levee protecting Dutchtown. The sandbagging work there has now ended. "There is water up against it in several places," the disaster director noted.

Officers of the Missouri Water Patrol were reported checking on the condition of a woman in Dutchtown today whose house trailer is surrounded by flood waters.