Reba McEntire performs at Show Me Center in 1988 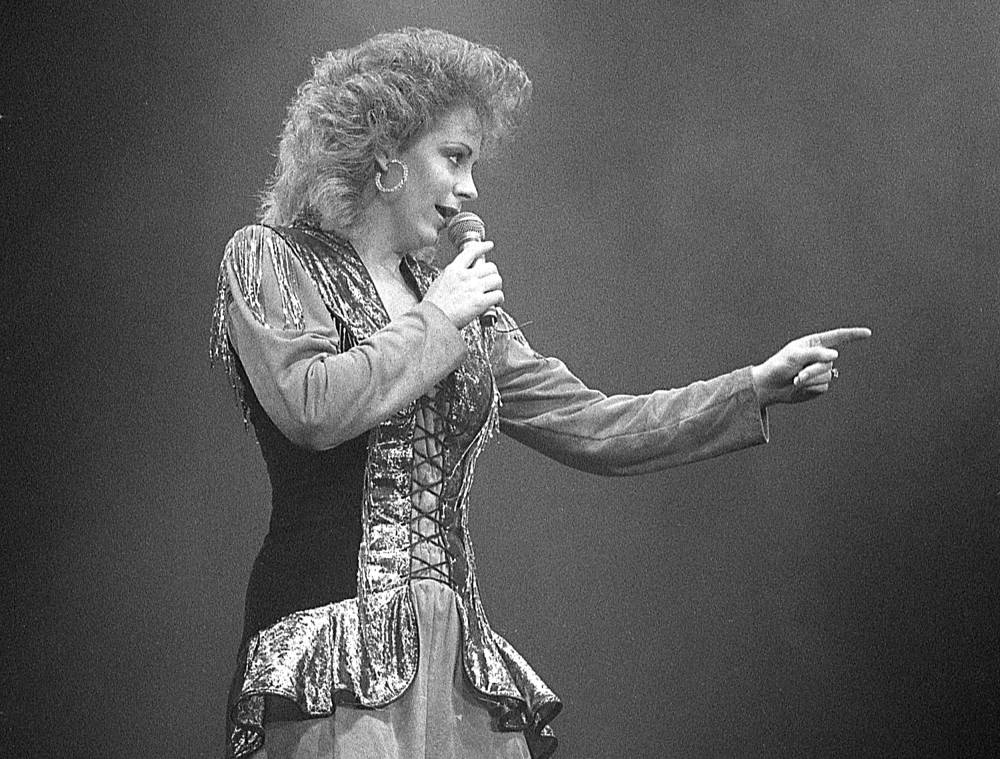 Reba McEntire, winner of the Academy of Country Music's best female vocalist award for the last four years, performs before a crowd of 3,123 persons at the Show Me Center Sunday evening. (Joel House photo)

She depends on good, solid musical entertainment. And that's what fans received Sunday night as the award-winning country music star performed at the Show Me Center.

The show, which lasted an hour and 15 minutes, featured the music which has helped Reba win the respect of the music industry.

In March, Reba was named Top Female Vocalist for the fourth time by the Academy of Country Music.

The same week, the Gallup Youth Survey announced that American teenagers had also picked her as one of their Top 10 Female Vocalists. No other female country singer made this Gallup Top 10.

A crowd of 3,123 was introduced to McEntire just prior to the concert through a film shown on a huge screen on stage.

The documentary film featured McEntire explaining her break into show business and a little bit about how the concert is put together.

She explained in the film that she began her singing carer with her brother and sister as the Singing McEntires. "I can remember when all the equipment we had could fit in the trunk," she told the audience through the movie. "Now it takes three buses and usually two trucks."

On the film McEntire was shown leaving her dressing room, walking down the hall and onto the stage. Then McEntire appeared on stage at the Show Me Center.

The eight-minute movie showed an endearing side of the performer which might explain a portion of her success. But the real key is her powerful voice.

In a selection of more than 15 songs, McEntire merged melody and lyrics into a powerful performance which had the Show Me Center throbbing to the beat of songs like "Let the Music Lift You Up" and others.

As she talked with the audience she explained that by request, the old songs have been put back in the show. Reba sang a medley of her classic hits.

The show was fast paced but controlled. The dance steps of McEntire and her back-up singers were carefully choreographed. At the end of most songs, McEntire stood still like a statue in the spotlight, seeming to absorb the applause.

McEntire, in a somewhat unexpected move, rocked the Show Me Center with her rendition of a classic Aretha Franklin hit, "Respect," which is included on her new album, called "Reba."

She performed other new music off that latest album like "Sunday Kind of Love," and "New Fool at an Old Game." The music tells about life from a woman's point of view, McEntire told the audience.

But it was McEntire's hits that brought the most appreciation from the audience--hits like "The Last One to Know," "What Am I Gonna Do About You" and "Whoever's In New England."

A special tribute to "the late, great Patsy Cline" began with a version of Elton John's "Candle in the Wind," altered to fit Cline's story.

Steve Wariner, a country music star in his own right, opened the show with an hour-long concert which included 14 songs. Wariner was obviously no stranger to the audience who applauded his blend of country music and rock and roll.

But it was the rich voice of the red-head from Oklahoma the audience came to hear. Right down to her accent, the show was uncompromisingly country.