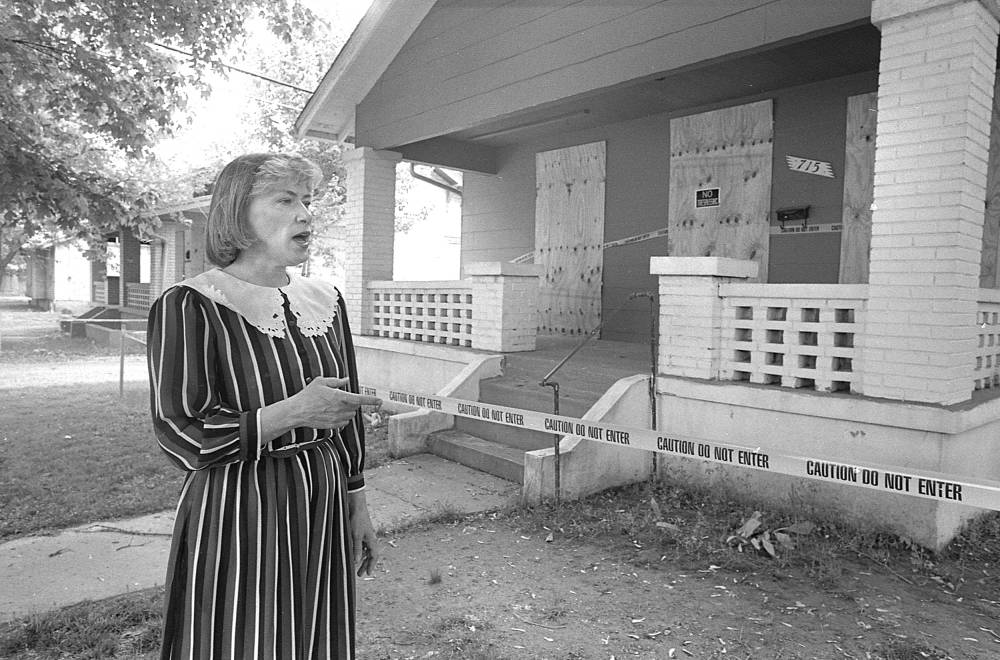 Doris Dace stands next to one of the houses that the state of Missouri bought and boarded up along College Street, which is on the new bridge route. Dace says it resembles a crime scene. Demolition of the houses could begin in late June. (Fred Lynch photo)

The Missouri Highway and Transportation Department will open bids May 28 for the demolition of structures along the new Mississippi River bridge route in south Cape Girardeau.

"As soon as the bids are opened, the low bid will be sent to Jefferson City. The Missouri Highway Commission will review the bid and, if everything is in order, will award the contract," Stehn says. "We hope to be able to get the contractor started in late June or early July."

Stehn says a contractor is now working to remove asbestos from six houses that will be torn down.

The removal of the buildings will be good news to Doris Dace and her neighbors, who live on South Ellis, South Sprigg and South Pacific, in the area along College Street.

Dace lives a short distance from several houses that have been purchased by the state. Last month, houses purchased on College Street were boarded shut to prevent trespassers from getting inside.

Dace says the large number of boarded up houses with yellow tape around them makes the entire area "look like a police zone or a crime scene. I'm just concerned about the unusual image it gives our neighborhood," she says.

"In the minds of some people, it seems as if it's an unsafe neighborhood, when actually it's not.

"I have a friend who moved into a house in the 700 block of South Ellis about three or four months ago. She told me her mother came to visit her and saw all of the boarded-up houses and yellow tape. Her mother was just beside herself until she found out the houses are in the right-of-way," said Dace.

LeRoy Nunn, District 10 right-of-way acquisition agent, says it is necessary to board up the doors and windows in the houses to prevent trespassers from breaking in and possibly injuring themselves. Since the state now owns the property, it could be liable if someone were hurt.

Nunn says 73 of the 132 parcels along the bridge route right-of-way have been purchased by the state. Most of the parcels between Asher Street and South West End Boulevard have houses or commercial buildings on them.

"We now have all of the right-of-way for the new highway from the river to South Sprigg," Nunn reported. "There are two parcels in that area that are still in litigation. We are now purchasing parcels from South Sprigg to South West End Boulevard as they become available. If the house is unoccupied, we try to purchase it first."

Nunn says the acquisition of the right-of-way is ahead of schedule at this time. "We're shooting for total acquisition before the end of the year. The only thing that's holding us back is manpower and some other projects that require our attention," he adds.

Nunn says the state has been successful in negotiating a fair price for the property.

"The people have been very cooperative with us," he says. "Most of the properties we purchased between Asher and South Sprigg were owned by landlords. But most of the housing from Sprigg Street west is owned by those who live in them."

The state has relocated 40 families displaced by the right-of-way purchases.

Although most of the houses along the right-of-way will be torn down, some can be moved to other locations, Nunn says.

"Obviously, we can't move larger houses because of their size and construction, and because of the distance to the nearest vacant lot. The streets are also too narrow and there are a lot of utility lines involved. However, some of the smaller houses, like those on College, west of Henderson, could be moved to other locations."

On a related matter, Nunn says the contract for the start of earthwork and culverts for the Highway 74 bridge route interchange at Interstate 55 is expected to be let soon.

Actual construction of the new Mississippi River bridge that will connect with the new Highway 74 route through town is still several years away. The bridge is expected to be opened around 2001.

The Bill Emerson Memorial Bridge opened to traffic on Dec. 13, 2003.