May Day at May Greene School 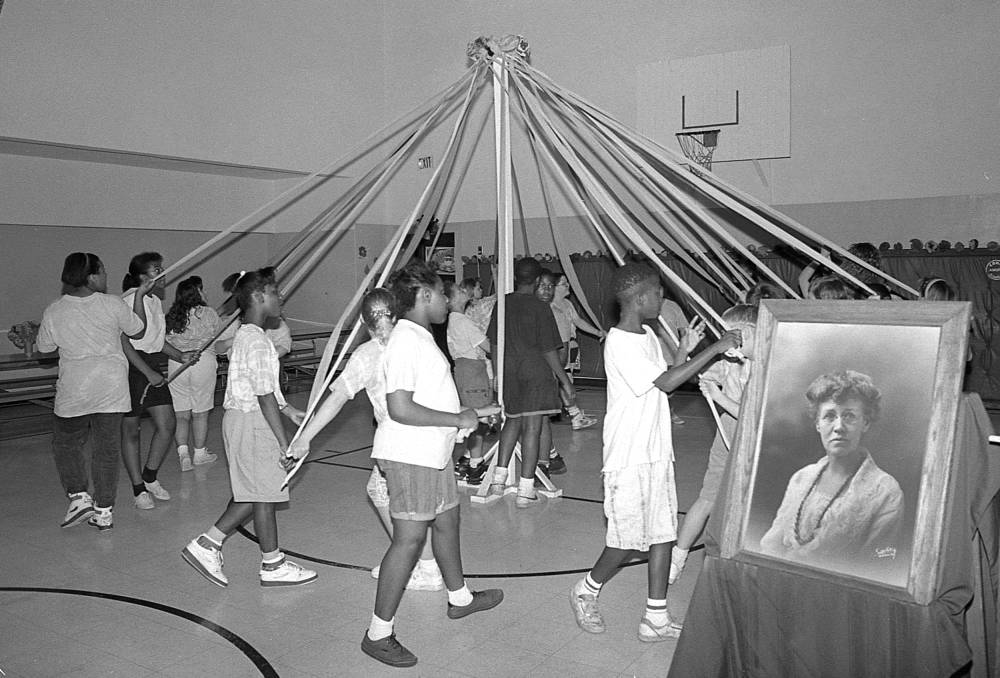 Fifth and sixth grade students at May Greene Elementary School in Cape Girardeau performed the ancient Maypole dance on Friday during the observance of May Day and the birthdate of May Greene, portrait at right, who taught at the school that is named in her honor. (David Hente photo)

May Day festivities honor May Greene

Students at the May Greene Elementary School participated in several special May Day activities on Friday to honor May Greene, the former teacher for whom the school is named.

The activities included a Maypole dance by fifth and sixth grade students at the school, a brief biography of May Greene, serving of a birthday cake and planting of flowers in front of the school, which is located at the corner of Ranney and Locust.

"She rarely missed school in the 53 years she taught. Miss May was often visited by former students, who brought her flowers," Lewis said. "Because she loved the springtime and flowers, we are celebrating her birthdate and May Day by dancing around the Maypole, eating birthday cake and planting flowers, which will beautify our school."

During the afternoon, students at May Greene assembled in the gym to watch as fifth and sixth grade students performed the ancient Maypole dance.

"This is the first time the Maypole dance has been performed in at least 12 years," said Lewis. "The dancers are boys and girls who volunteered or were chosen to perform.

"They have been practicing their dance routine since early April. Each dancer tie-dyed their T-shirt in different colors to signify the bright colors of spring flowers."

For the dancers, it was the first time they had ever performed the Maypole dance, a ritual that can be traced back to medieval times.

Bonquita Cox says she volunteered because it was fun being a Maypole dancer. Another dancer, Chris Allen, says he enjoyed watching the colored Maypole ribbons form a unique design as they danced around the Maypole.

Lewis said the Maypole dance is part of a tradition of May Day, which is celebrated as a spring festival in many countries.

"We celebrate the revival of life in early spring after winter. May Day is a very old tradition for many countries," she explained.

"In some European countries it became a time for courting young ladies. German boys would secretly plant trees in front of their sweetheart's windows. In America, children celebrate by gathering spring flowers and putting them in handmade paper baskets and hanging them on doors of their friends," she points out.

"We also have May Day parties, select May queens and dance around the Maypole and sing songs in our parks and schools."