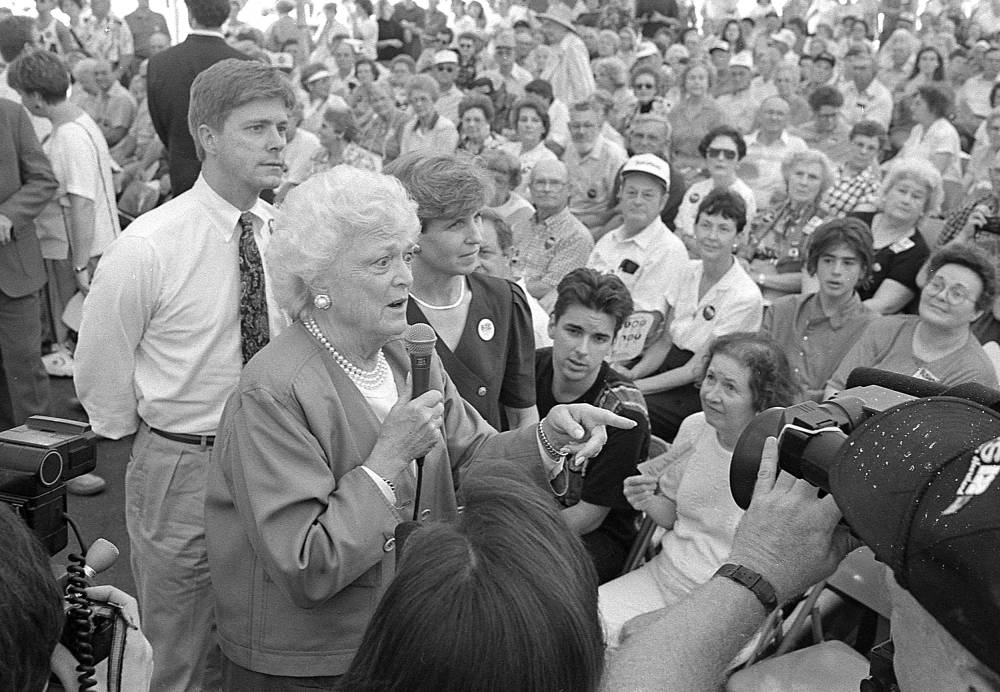 ABOVE: First Lady Barbara Bush takes questions from senior citizens in the Rest and Relaxation Tent at the SEMO District Fair on Sept. 16, 1992 at Arena Park in Cape Girardeau. (Mark Sterkel photo) BELOW: First Lady Barbara Bush presents Brad Mueller of Perryville with the grand champion overall ribbon for his polled Hereford in the Future Farmers of America livestock judging at the fair. (Fred Lynch photo) 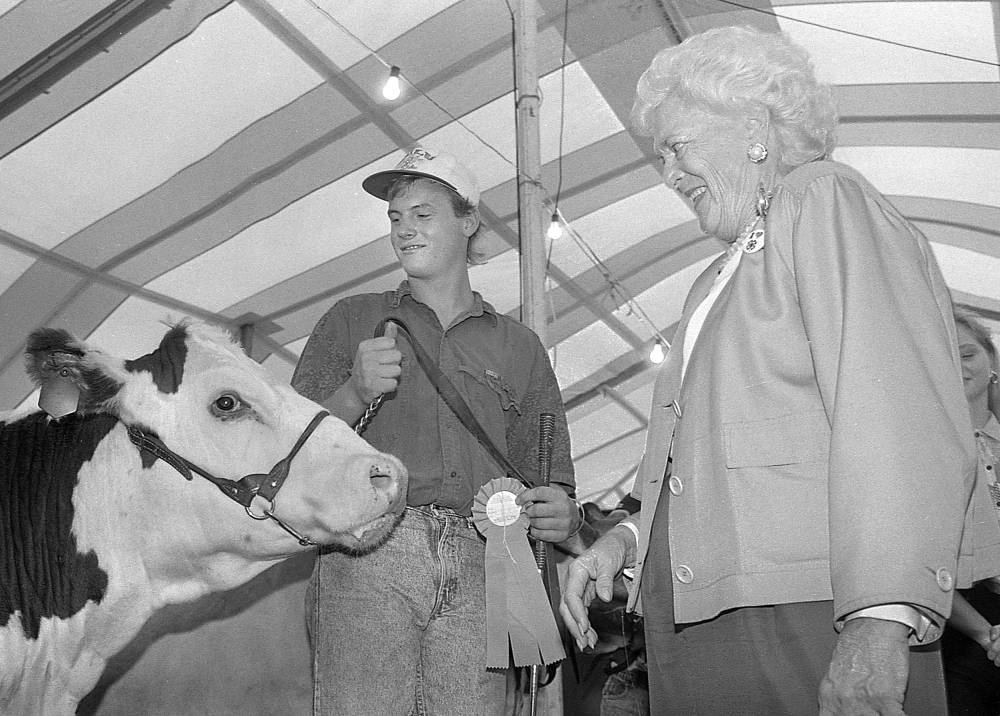 First Lady Barbara Bush touched briefly on a variety of topics during a 50-minute visit to the SEMO District Fair Wednesday, but it was her personality, sincerity and humor that won over the crowd that greeted her.

Bush fielded questions and comments from nine people in a crowd of mostly senior citizens at the fair's Rest and Relaxation Tent, talked briefly with about two dozen media representatives from around the area and then went to the livestock area to present championship ribbons to FFA and 4-H members for cattle.

The First Lady was a hit from the moment she arrived and was warmly greeted after Fair Board President Pete Poe asked the crowd "to welcome the fairest lady in the land to the SEMO District Fair."

Bush said she was glad to be in Missouri, but quickly added, "I'm surprised I know where I am. I have been in seven states and 11 cities in the last week."

Describing her husband, Bush observed: "He is the most able, cable, finest, most decent man...he's someone you can trust, and that's very important."

She was accompanied by Missouri First Lady Janet Ashcroft and escorted around the fairgrounds by Poe and Republican state senatorial candidate Peter Kinder.

Bush landed at the Cape Girardeau Municipal Airport on an Air Force twin-engine jet. About 50 people turned out to watch her arrival.

At the livestock area, after presenting ribbons to the winning youths who were standing next to their cattle, Bush made some brief remarks and shook hands before heading for the airport and a flight to St. Louis.

Bush made it clear that she didn't know anything about cattle.

"It is clearly obvious to everybody that I know zero about cows, heifers, and everybody else," quipped the First Lady.

But Bush added that she knows a lot about children and that programs like FFA are good for building character and citizenship in young people.

Later, as she was leaving the livestock tent, Bush asked for the microphone to apologize for not mentioning the 4-H organization. "I didn't know they weren't the same thing," said Bush. "I feel the same way about the 4-H club as I do the Future Farmers of America. Please forgive me."

Asked what the president had done for senior citizens, the First Lady noted that "under Reagan-Bush the Social Security system has been stabilized and strengthened and it is sacred; it is not going to be touched. But I think the biggest thing George Bush has done for senior citizens, besides bringing a freer, safer world, is inflation is down. For people on a fixed income that is very important."

Bush stressed that literacy is a key to strong families and family values. "We are now trying to make literacy a value in every household," she remarked.

She praised the national literacy program and cited Missouri's Parents as Teachers program as an "outstanding program."

At a recent meeting with large-city mayors, she noted that the president was told that the breakdown of the American family is the reason for the major problems they face.

"One way to make the American family stronger is for mothers, fathers, grandparents and caregivers to sit with children from birth and read to them. It's a great way to bond and a great way to teach children...all statistics show that children who are read to and who are talked to do much better in school.

"If you want to strengthen families, strengthen your literacy. I really believe that very, very strongly."

Asked about the spirit of volunteerism in the country, Bush noted, "Americans want to help...people are helping all over the country and it is very, very exciting. I think one of the great things George has done has made all of us feel that, yes, we can help other people, and that it is our job to help other people."

She added that "family values is putting your arms around each other, not just people in your family. We are doing more of that in this country and thank God we are."

Asked to characterize the campaign, Bush replied: "We are going up; just where we want to be--going right on up."

She pointed out that exports are up 39 percent during the Bush administration, something that helps farmers and will create jobs in Southeast Missouri."I think the farmers ought to look long and hard at George Bush and vote for him," she declared.

One questioner asked whether she believed a husband should stay at home and cook for his wife. She replied that "if both people have jobs or is the wife has a job and the husband doesn't, or if they have decided that's the way they want to live their life, that's fine. That's what is great about this country.

"But are you asking me if George Bush cooks for me? Not much. But does he help clean up? You're darn right he does."

In response to one question about how she would deal with a certain issue the First Lady joked that the ground rules need to be clarified. "I am not the elected public official. I am the wife of the president of the United States. I do not fool around in his business and he does not fool around in mine--well, maybe a little bit."