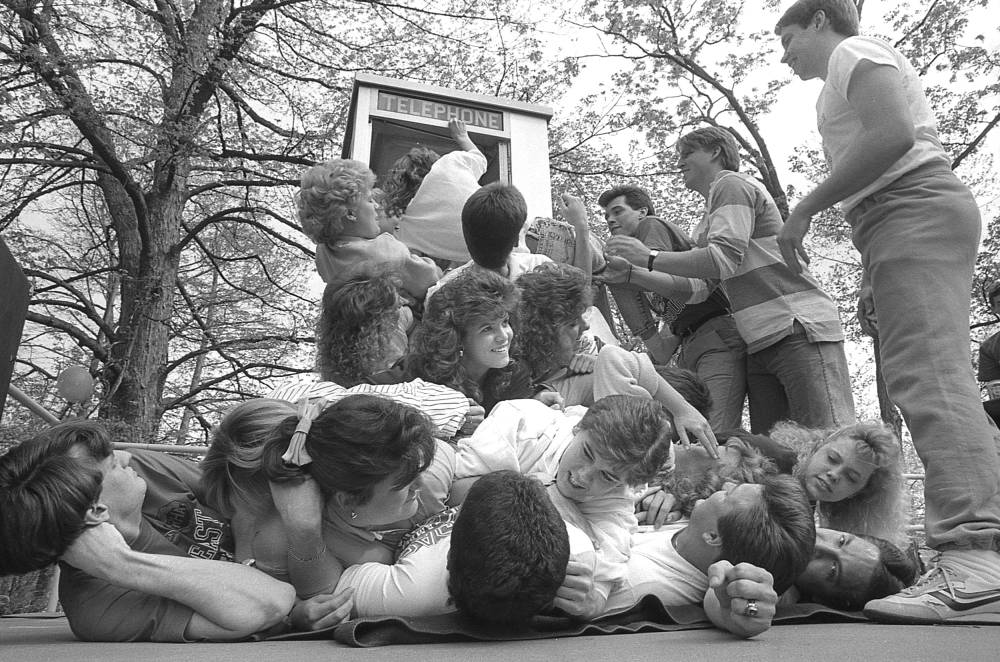 Southwestern Bell and the SEMO University Residence Hall Association sponsored a contest Thursday to see how many people could fit into a telephone booth. Four different groups attempted to break the record of 30 people, set on the SEMO campus in 1959. The record still stands, but the Towers North Hall Council, pictured, were successful in cramming 23 people into the telephone booth. (Mark Sterkel photos, above and below, left.)

Below, right, from the April 16, 1959 edition of the Southeast Missourian: The latest college craze came to Cape Girardeau Wednesday. This is the result. Most of the 35 State College students who ultimately made it are jammed here in an upright telephone booth. One of their number, on top, holds the phone, another inside dials. This, they say, conforms to the rules--assuming such exist--to make it official. Because they used an upright booth, placed a call and crammed 35 inside, the contestants (?) claimed a world telephone booth stuffing record. See story below. 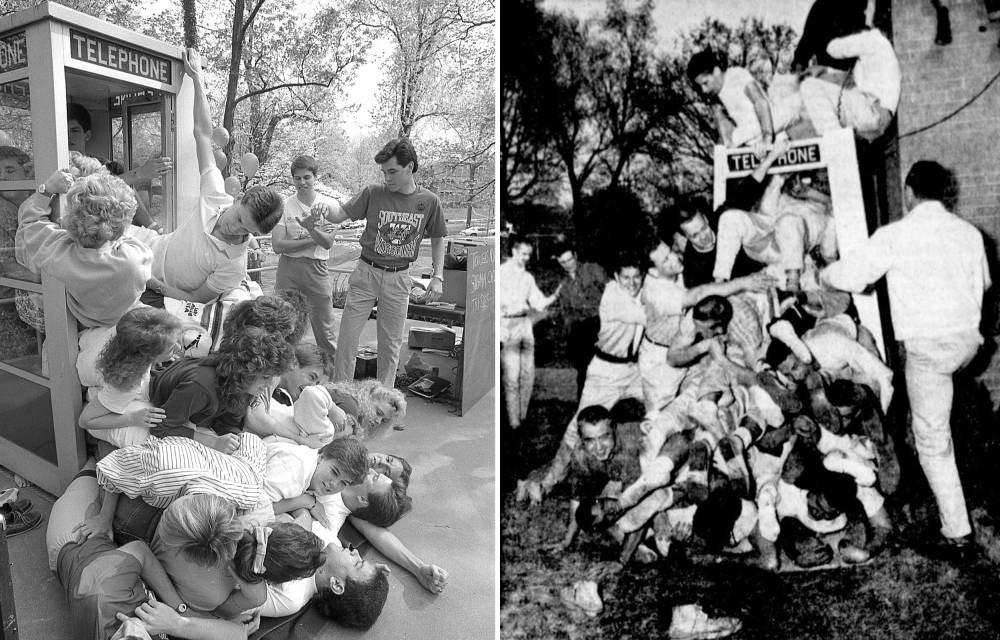 Education had its day in Cape Girardeau Wednesday.

Thirty-five young men from State College packed themselves into a telephone booth at Capaha Park, placed a call and thereby laid claim to a new world's record for this latest collegiate sport.

The stunt differed in two details from its advance billing. First, the booth remained upright and not on its side as originally planned. Second, it wasn't an old booth, but the permanent one that stands beside the park swimming pool.

Now the other day, out at Nampa, Idaho, 40 students crammed themselves into a telephone booth. But they didn't follow the rules--the State College rules, that is.

These students from Northwest Nazarene College played that if anyone got an arm or a leg inside he met required standards.

Not so, say the men students from up on the hill. Legs or torso must be all the way in the booth.

And that's the way they did it.

A la sardines, they packed in head-to-foot, starting from the bottom--oh, those poor guys--and working their way to the top.

Sitting on the top of the booth was a student with a telephone.

One of the hands inside turned the dial and a call was placed. With 35 men inside the booth, this made it official, the students said, as they laid claim to the world record.

Before the experiment--nothing Bell Telephone or Western Electric sanction--began, the students removed the door and took out screws along the side, fearing there might otherwise be a splintered booth.

The exhibition of phone booth stuffing didn't go unnoticed. A crowd of some 400 people gathered around to view this noble effort to better mankind.

Someone called it to the attention of the gendarmes and three boys who had the temerity to climb on the roof of the swimming pool were taken to headquarters, chastised and released.

By the way, telephone booth cramming is now passe.

The latest is seeing how many kids can jam themselves inside the circumference of a hula hoop. The world's record, as of this writing, is 13 and is held by children at Central School, Redondo Beach, California.

What in the world ever happened to jacks?