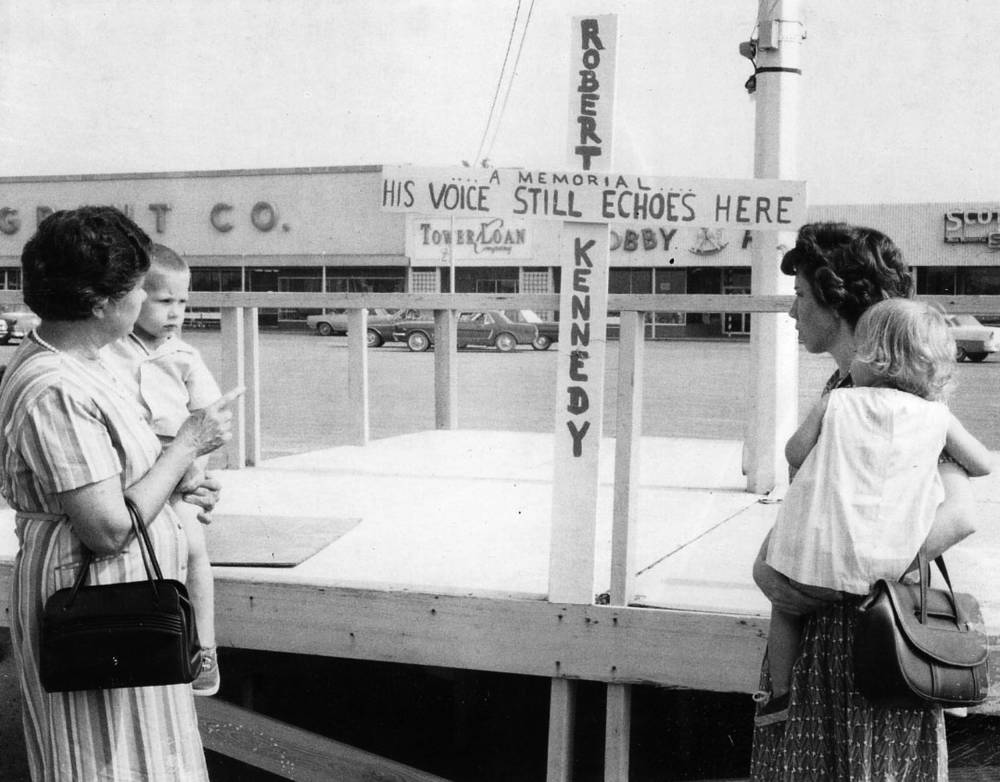 "His voice still echoes here," are the words placed on the horizontal arm of this cross erected in memory of the late Sen. Robert F. Kennedy. The cross is in the Town Plaza parking lot on the platform from which Sen. Kennedy spoke on April 25. The vertical staff bears the name "Robert Kennedy." At left, Mrs. Fred Steger points out the cross to young James Allen Furr, while at right, Mrs. Steger's daughter, Mrs. James Furr and her daughter, Jo Ann, look on. (Southeast Missourian photo)

Missourian newsmen who covered the Cape Girardeau visit of Sen. Robert F. Kennedy April 25 came away with a variety of impressions of the man.

Sen. Kennedy, who at that time was at the height of his campaigning for the Indiana primary, interrupted that effort to come to Cape Girardeau. It has been the only Missouri visit he has made during the present campaign.

While the exact reason Sen. Kennedy would interrupt an important campaign in Indiana for a single stop in a Missouri city has been somewhat vague, Cape Girardeau's selection as an All-America City was said to have had something to do with it.

From the time he alighted from the large Electra turbojet at Municipal Airport, the smiling candidate grabbed hands and spoke to his political admirers--and some who do not agree with him politically but who were there to shake hands anyway.

The senator arrived at the Town Plaza Shopping Center to the cheers of a youthful audience which crushed upon the temporary speaker's stand erected for his appearance.

He smiled and he waved and with each wave came another cheer. It took some persuasion on his part and by others to quiet the tumult of his enthusiastic audience of young people.

They were like those who have surrounded him wherever he has gone. Largely college age, sprinkled with teeny-boppers, they were drawn like magnets to his own youthful appearance.

As he smiled and spoke one could see the communicative spark move between him and his audience. But not so with the middle-aged group who were on the outskirts and who stood back at the curbs to listen through the public address system.

The difference between the ages could be seen and it could be felt by those midway between them.

Sen. Kennedy had an empathy with the young people that drew him close to them. The cut of his clothes, the shock of hair over his forehead which he occasionally brushed back, his use of words formed a bond with this section of his audience.

His finger stabbed the air as he made his points, a familiar gesture seen repeatedly in his television appearances, but made more emphatic through personal appearance.

The audience, regardless of political beliefs, could not help but be impressed with the senator's vitality and his freshness. Here was vigor, a quick step, a flash of teeth as the crowd reacted to a witticism.

This was a display of poise and charm, even at the end of a hard day campaigning in Indiana before the quick flight to Cape Girardeau.

The senator whose name is almost synonymous with youth and vigor in politics, looks not so young upon closer examination.

The lines of maturity were evident in his deeply tanned face. Fatigue was there also, the toll of day after day of grueling campaigning, mostly wading through throngs of admirers.

A Missourian reporter, who was with Sen. Kennedy for 20 to 25 minutes on a ride from the shopping center to the airport, found the senator cordial, responsive to questions, but somewhat reserved. His impression was that Sen. Kennedy was extremely tired.

The senator answered questions with what seemed to be frankness and a genuine desire to be cooperative.

His answer to one question was facetious. He was asked how he accounted for the adulation the young people showered him with. The senator with a small grin, replied: "I guess it's because I'm so kind, generous and lovable."

It was the only light moment in the interview.

It seems worthy to note, particularly in view of the shooting, that Sen. Kennedy did not seem surprised to find a stranger sitting in his car when he came out of the restaurant to return to the airport here.

The reporter had arranged for the interview with a Kennedy aide who had advised him to get into the car before the Kennedy party left the restaurant.

Mrs. Kennedy struck the reporter as being a particularly warm and friendly person, interjecting comments and questions during the interview with her husband and volunteering a departing handshake at the end of the ride to the airport.

She had misplaced her purse during the hubbub of the Cape Girardeau visit and asked the newsman if he could find it beneath the back seat of the convertible. He couldn't, but someone later was observed handing Mrs. Kennedy the purse as she was boarding the plane.

Another staff member, who covered the reception Democratic leaders gave for Sen. Kennedy at the Flaming Pit Restaurant, reported that the senator milled through the crowd and then spoke informally, answering questions in an off-hand--sometimes humorous--way.

The reporter noted that the senator seemed more relaxed at this time than earlier, but his hands shook. Reporters traveling with the Kennedy party explained this was from nervous exhaustion.

Cape Girardeau city officials took it upon themselves to furnish special personal protection for Sen. Robert F. Kennedy during his visit here April 25 even though the Kennedy advance men had requested none.

City Manager Paul F. Frederick and Police Chief Irvin E. Beard worked out plans to protect the senator the best way officers could from the time he stepped off the plane to the minute he stepped back on again.

But the job was described as almost impossible from the standpoint of protection from a possible gunman up to 500 yards away with a high-powered rifle and telescopic sight.

Other officers along the senator's route gave periodic protection.

About 55 officers were on duty for the two-hour visit. These included Missouri highway patrolmen, Cape Girardeau city officers and auxiliary officers.

Officers reported no real problems other than the crowd surge. The senator was knocked to his knees several times.

Sen. Kennedy rode from the airport in an open-top car along an announced route. He spoke from an elevated platform which was very crowded with press and police. He had walked up to the platform through the crowd from William street.

Police milled around in the crowd, coordinating activities with walkie talkies. About five officers stood on the platform with Sen. Kennedy as he made his speech. Officers throughout the vicinity were in both uniforms and plain clothing. Some stood back to watch the overall situation.

Sen. Kennedy's advance men had not requested any special body guards. "We asked about this," Mr. Frederick said. "And we were told that they would be unnecessary."

The senator brought along two men who acted as body guards. The officers with Mr. Kennedy watched the crowd, rooftops and car tops. They also surveyed the crowd for any suspicious spectators.

Officers reported they encountered no such problems.

The crowd surrounded the platform and pushed forward most of the time. It was not possible to approach the platform.

Other officers stood by to observe the overall situation. The situation within the shopping center was probably well in hand in regards to any threats on the senator's life.

However, from a distance, officers reported there was little they could have done. They watched the area but this was no assurance that a gunman could not have fired from a block or two blocks away.

There were several far-away vantage points which would have allowed the gunman to escape. If an assailant had fired at close range, his chances of getting away would have been slim.

The situation would have been uncontrollable if such a shooting would have occurred. The crowd would likely have surged forward to see what had happened.

Removing Sen. Kennedy from the platform and to a hospital would have been near impossible until the crowd was quieted and moved back. An ambulance could not have easily been brought in through the crowd.

The senator left the platform after his speech, again walking through the crowd. It was so intense to the direct south where he was headed, the route had to be changed to the east. Even then, some officers were separated from the senator.

Sen. Kennedy had originally intended to walk over to the restaurant. But at William street, he got into a car and rode the rest of the way because of the crowd.

During these walks, police said Sen. Kennedy was knocked to his knees several times. He also had a nail torn from his thumb.

Police officers were also scratched, bruised and cut from holding back the crowd.