Cape Girardeau is All-America City in 1968 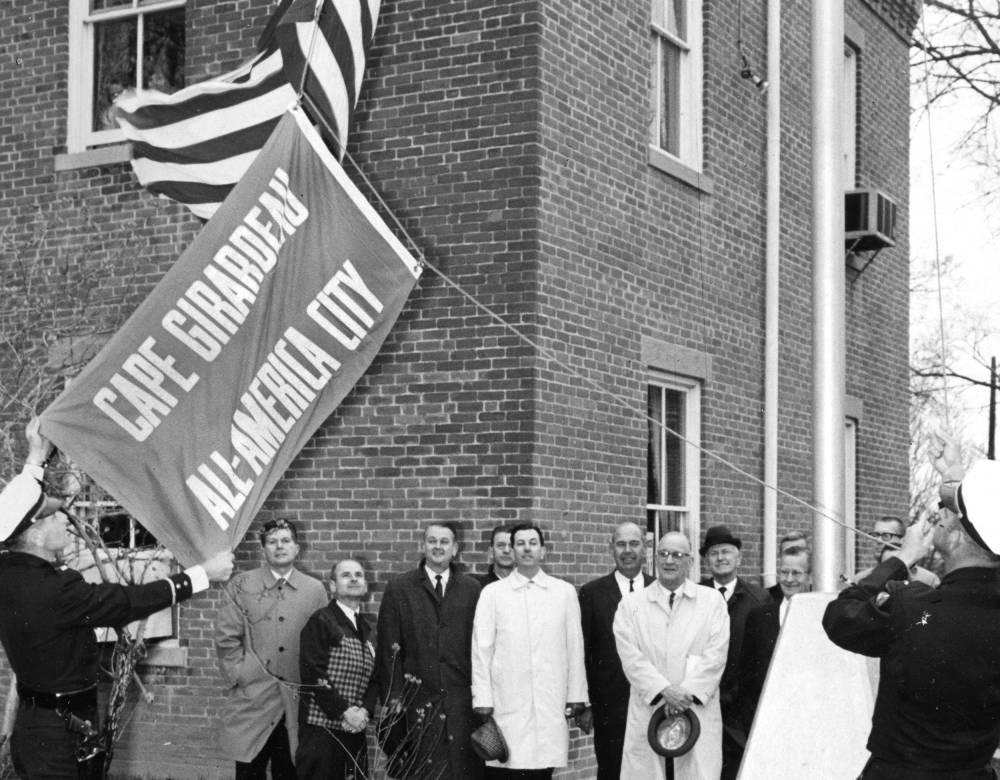 The new All-America City flag is hoisted with the American flag in a ceremony March 21, 1968 outside Common Pleas Courthouse in Cape Girardeau. Below, James F. Miller announces that LOOK magazine chose Cape Girardeau as one of 11 cities in the country for its All-America Cities team which reflects purposeful action, not perfection, as the yardstick for selection. 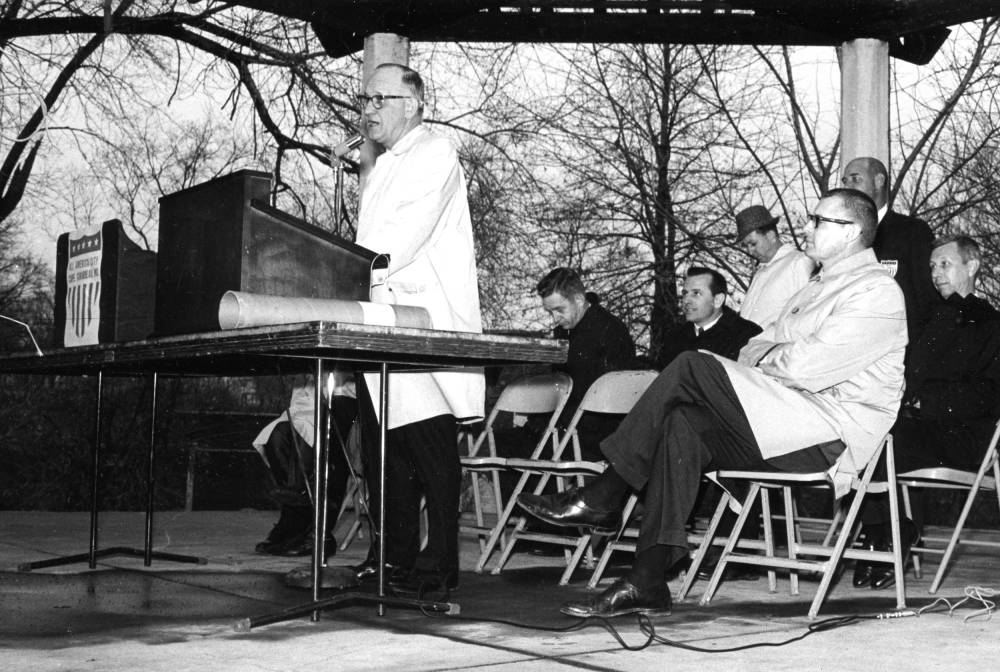 Cape Girardeau is described as "A 1968 edition of "Life on the Mississippi" in the current issue of LOOK magazine, which takes Mark Twain's description of the old river town as a jumping-off place for a two-page word-and-picture story.

The story is the focal point of the All-America Cities announcement by LOOK and the National Municipal League.

Cape Girardeau is singled out for the report in the regional edition which covers a several-state, midwest area.

Earlier in the general national announcement of the All-America Cities, it is included in a brief rundown of the 11 selected from entries submitted last fall from all parts of the country.

A picture in this portion of the story shows one of the pupils at the public school vocational-technical center at work on some of the machinery there.

The brief early report on the city's efforts describes the growth of the city in the 1960s and the problems it has created. Public support of moves to meet these is outlined. Mentioned are the establishment of Council-Manager government, industrial expansion, city limits extention, upgrading of Municipal Airport, work by college students at the civic center and the community effort to raise $1 million for St. Francis Hospital.

The two pages devoted to Cape Girardeau contain pictures of classes at Hawthorn School, the Old Opera House and scenes at the vocational-technical school.

"A century ago, Mark Twain described Cape Girardeau from the pilothouse of a Mississippi River steamboat: 'Cape Girardeau is situated on a hillside and makes a handsome appearance... There was (a) college higher upon an airy summit--a bright new edifice, picturesquely and peculiarly towered and pinnacled... Uncle Mumford said that Cape Girardeau was the Athens of Missouri...'

"Education still ranks higher up on Cape Girardeau's list of achievements. Southeast Missouri State, the college Twain saw, has spent $12 million on new facilities to stay as bright today as it was back in Twain's time. At the other end of the educational scale, Cape Girardeau has started a homegrown educational revolution with its new Hawthorn Elementary School, where teams of teachers can shift class groupings and even classroom walls to tailor education to each student. The town's educational system, complete with modern vocational school, trains teenagers and adults alike all the way from stenography to sheet-metal working.

"The Cape Girardeau that Mark Twain saw is gone. Showboats used to slide down the ways of local shipyards, to carry drama and spectacle the length of the Mississippi. Now not even a museum piece remains. The hotel where Twain would stay overnight on his regular steamboat run down from Hannibal has made way for office buildings. The solid Opera House, built right after the Civil War, is today a famous restaurant with a French menu and Creole flavor. Right next door, a 13-story skyscraper is going up to house offices and television studios.

"And the great river itself? It is gone, too, banished from view behind the flood-control levees. All this has to go down as the price of change in a 'City with the Sight & Sound of Progress' as they say in Cape Girardeau."

Cape Girardeau was one of the 22 finalists from among more than 100 entries in the 1966 All-America City competition, but ranked just out of the top 11 winners that year. Below is a photograph of the group that traveled to Boston to present the city's case. 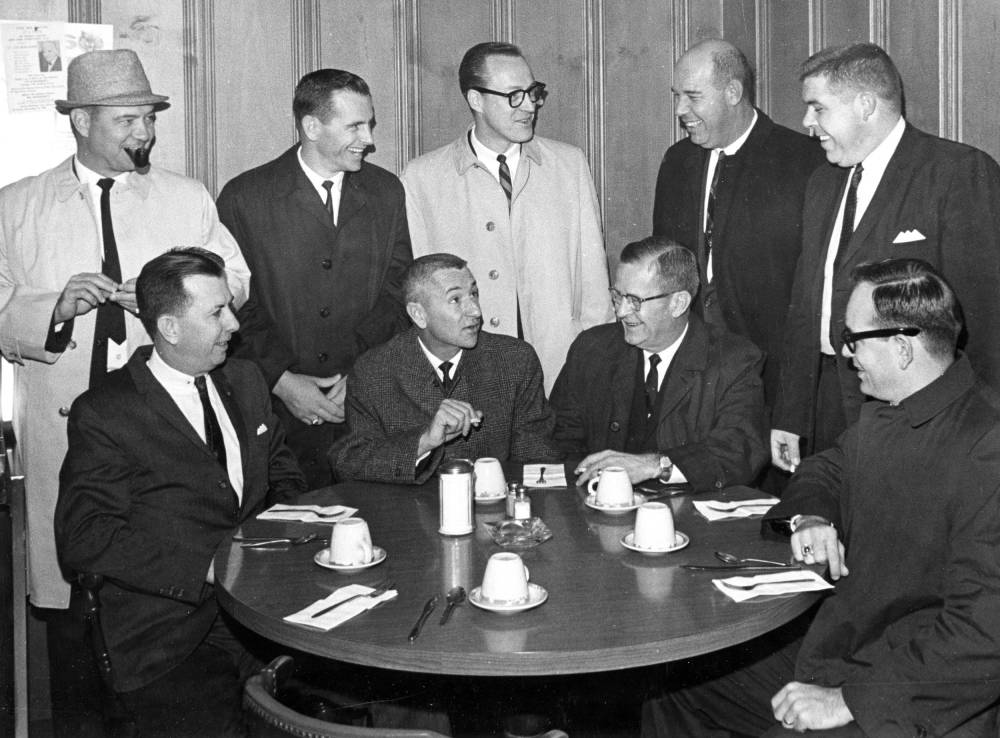