Saving the May Greene Garden 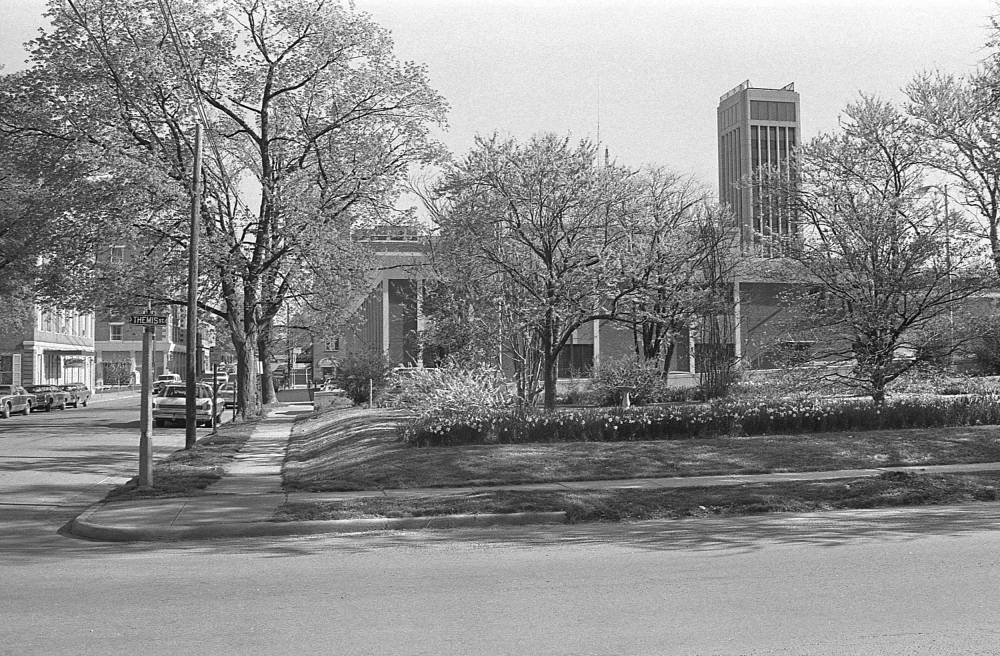 The future of May Greene Garden at Fountain and Themis is clouded by the issue of parking for Federal Court when it is in session. This view of the garden looks toward the Federal Building. Parking places along Fountain Street at the left have heretofore been reserved for jurors when court is in session, but the city has acted to discontinue that procedure. More photos below story. (Fred Lynch photo)

The future of U.S. Federal Court sessions in Cape Girardeau and the retention of May Greene Garden behind the Federal Building at 339 Broadway appear to be in doubt because of at least one common problem--the need for additional parking.

In the case of Federal Court, pressures from two directions may force movement of all civil cases originating from Southeast Missouri to the District Court in St. Louis. There is the parking problem, on the one hand, and there are General Accounting Office studies suggesting it would be more economical for the government to discontinue scheduling trials here.

"For 15 years the GAO has been on the court administrative offices to close both the Hannibal and Cape Girardeau courts," he explained. "It is my position that we best serve the people of Southeast Missouri by holding court there." He said that was his first concern.

Currently, he continued, there is a fresh attempt to move the court. He has written Rep. Bill D. Burlison, 10th District congressman from Cape Girardeau, opposing the GAO's effort. Mr. Burlison has agreed with him, he said.

Judge Meredith said that coming here was no hardship on he or the assistants. He, too, pointed out that the history of the parking situation was rooted in local opposition to destruction of the garden. "There would have been adequate parking," he said, and pointed out that until the city's action of last week parking was adequate.

Preservation of May Greene Garden, a battle that was fought here 10 years ago when the new Federal Building was completed, hinges on the issue of providing additional parking. The General Services Administration, responsible for operating and maintaining the building, could decide to pave over the tiny garden which it owns.

In the middle of that issue is the City Council which last week at study session agreed that the city would not in the future mark off parking spaces along Fountain and Broadway for use by jurors who are summoned to serve during sessions of the court in May and November.

City Manager W.G. Lawley had ordered police not to mark the parking spaces. The decision was made when a request to City Hall was received to provide several spaces near the close of tax season for persons making a last-minute dash to the Internal Revenue Service offices in the Federal Building.

Councilmen at the April 14 study session declined to grant the request. Then, Mayor Howard C. Tooke said he didn't see why the city should provide the space for anyone, including the court. There was general agreement, and the city manager took action to remove the parking.

That set in motion a number of wheels.

Judge Meredith is concerned about the lack of parking. Jurors are summoned from across a wide area. Space at the back of the Federal Building is provided on the present lot, but there are insufficient slots for all jurors. Therefore, space has been as a courtesy, provided by the city on the streets.

To former State Senator A.M. Spradling, the city's action in eliminating the on-street parking may have been the final stroke so far as continuation of the court here is concerned.

Mr. Spradling, along with most lawyers in Southeast Missouri, said he is opposed to all court business being transferred to St. Louis. Several years ago all criminal cases were moved there in order to expedite trials under the constitutional guarantee of a speedy trial.

Mr. Spradling heard from Judge Meredith about the city's action in discontinuing parking. In turn, the Cape County Bar Association has been informed and efforts are being made to persuade the city to return the parking.

Mr. Spradling said he sees many reasons for the city, area residents, and lawyers to act to preserve the court here. He cites the need for having juries composed of Southeast Missouri people, familiar with the area and character of the region, as well as the saving of money for parties and witnesses involved in suits. It would be more expensive for all to travel to St. Louis for trials.

"There are roughly 250 to 300 cases a year that develop here," he explained this morning. "All of the people from this area would have to go to St. Louis. It would be a real tough situation."

The lack of parking here, in Mr. Spradling's view, was in part created by the city and the public pressure exerted more than 10 years ago to preserve May Greene Garden.

"What started out to be a parking area for the Federal Building dropped down to be at least one-half as large," he points out after the General Services Administration agreed not to pave over the garden.

That decision was made in November 1968. GSA turned over, under a contract agreement, the maintenance of the garden at Themis and Fountain to the Cite de la Rose Garden Club. That contract was renegotiated in 1973, and according to Mrs. Y.G. Kraust, president, it expires in November.

Mrs. Kraust said this morning that the club would regret giving up the garden.

The GSA presently has no plans to expand the parking, although a regional administrator explained this morning that a survey of needs would be taken in the near future because of the city's action in removing the on-street parking.

George Garoutte, the area manager of federal property for the region, including Cape Girardeau, emphasized there were no existing plans to expand the lot. But, removing the extra parking "may change the whole ballgame," he said.

According to Mr. Garoutte, agencies using the building actually are charged rent for use of the space. Several agencies have expressed the need for more parking. He said that tenant needs would be surveyed.

Any decision over the future of the garden spot would not come for months. Mr. Garoutte said there were no funds in the present budget for expanding parking, and it would be several years to get such a move decided and funded.

May Greene Garden is named for Miss May Greene, who for decades was a schoolteacher in Cape Girardeau, and for whom a public school is named.

Her family came here prior to the Civil War. They built a yellow brick house at the end of the garden which was razed in 1964 to make way for the Federal Building. The building here opened in 1968.

At the urging of The Missourian and many citizens, the government agreed to keep the tiny garden and not convert it to parking. Arrangements for the on-street parking apparently date back to that period. L.C. Hengst, building superintendent, recalls that the parking has been provided for many years.

Read about the history of May Greene Garden in this previous blog: 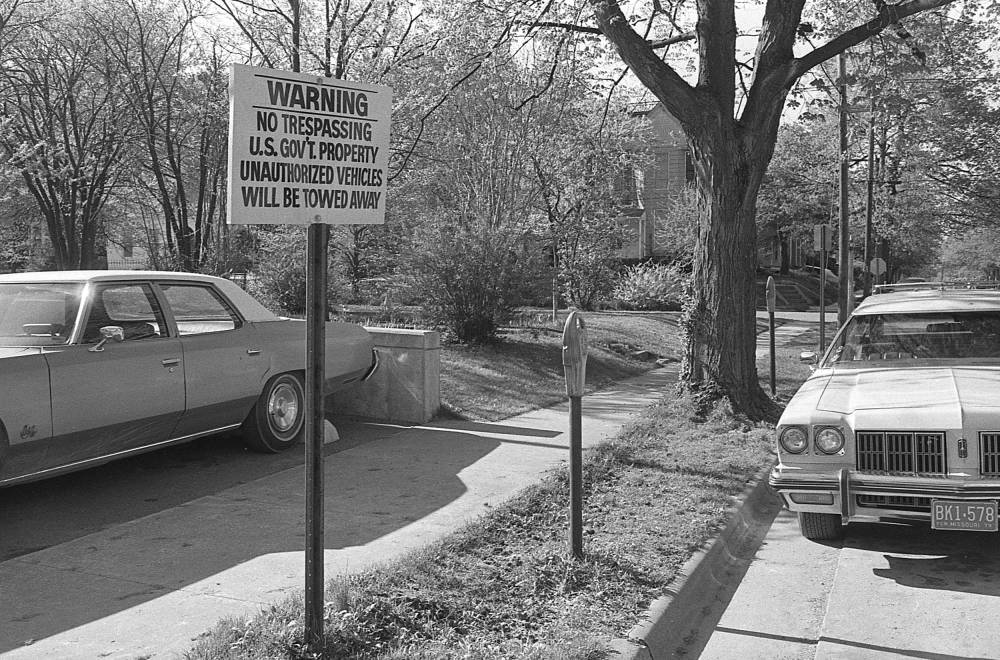 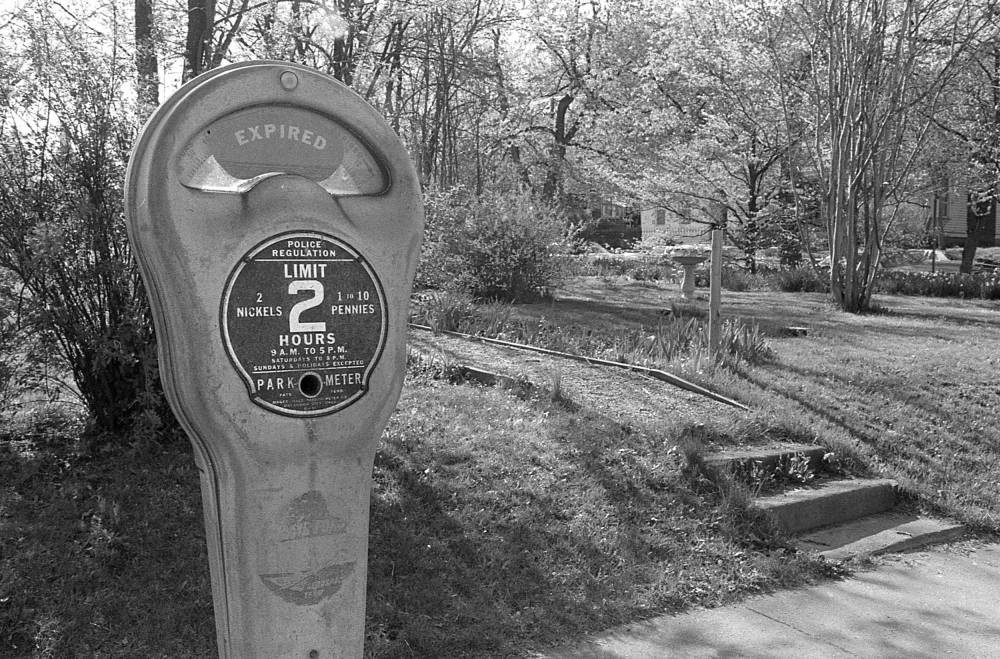