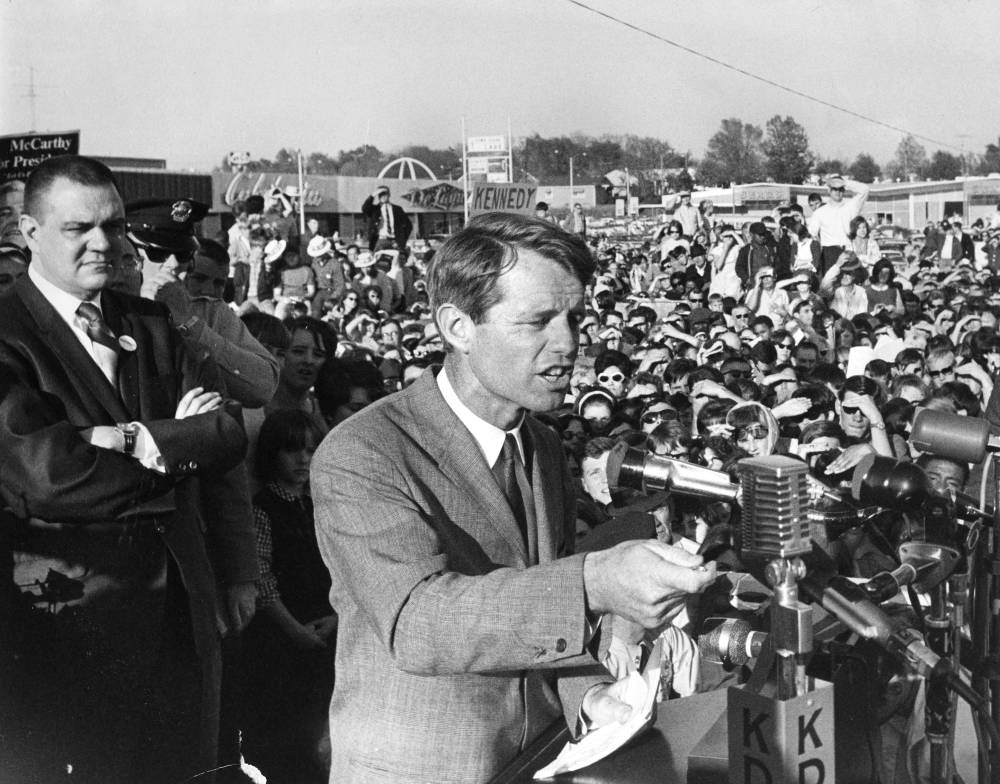 U.S. Sen. Robert F. Kennedy holds his notes in one hand and gestures with the other as he makes a point during his speech in the Town Plaza Shopping Center Thursday afternoon, April 25, 1968 in Cape Girardeau. At left is state Sen. Albert M. Spradling Jr. who introduced Sen. Kennedy. In the background is part of the crowd which thronged onto the parking lot. Note a "Kennedy" sign just above the senator's head while at far left a "McCarthy for President" sign can be seen. (Billy G. Hampton photo)

Bobby Kennedy came to town, A-ridin' in a fastback.

Mopped his hair from off his brow, And called it charismatic.

Oh, how they loved him.

The kids, that is. They hung on to every word and cheered and waved and had a rousing time.

In fact, they were about the only ones who could see him.

Arriving well before the appointed hour and continuing to swell as his plane arrived late, college students packed themselves solid around the Town Plaza stand where Sen. Robert F. Kennedy was to appear.

They had their placards with them--the now familiar comments about the eight professors--and a liberal sprinkling of McCarthy signs.

The senator didn't like those. At the outset of his remarks he waved and said, "Take down those McCarthy signs."

He had to squeeze his way through the crush, inch by inch, to reach the stand.

Once there he turned to all sides to greet his college-age friends.

Oldsters--anyone above 21 was a senior citizen--had to stand at the outer fringes and rise on tiptoe, craning their necks to see.

The cameramen perched on top of cars or on trucks, wherever they could get, and they had a time with the forest of signs.

Shouts to lower them finally were heeded, and the cameras ground away. Still cameramen generally used long-range lenses to make their shots.

As the senator reached the stand in the center of the Town Plaza parking lot, flanked on all sides by his aides and his local hosts, some of the collegians perched on shoulders to get a better view or to take pictures.

Deeply tanned, wearing a grey suit, blue shirt and darker blue tie, the senator was a slight figure as he raised his hand in salute to his youthful audience.

When Mrs. Kennedy was introduced, the crowd renewed its cheering. And John Glenn, the former astronaut, had to wait until the noise about him subsided before he could make his remarks.

He was a surprise. There had been no advance notice that Mr. and Mrs. Glenn were in the party. America's first astronaut to orbit the earth looked launch-fit.

When Sen. Albert M. Spradling, introducing the senator, referred to Cape Girardeau as an All-America City, it drew a boo of derision from the college crowd.

Local students were augmented by four large bus loads of students from Southern Illinois University, and the two groups, plus high school youngsters, mingled together.

All of Sen. Kennedy's early words, his mood, his gestures, were directed at the youthful audience and they ate it up with cheers frequently punctuating the presidential-hopeful's remarks.

When the senator, paying the customary tributes to local politicians, commented on Congressman Paul C. Jones as the 10th District representative, it was lost on the college crowd, indicating that most must have been from outside the district. There were no cheers and the impression was the youngsters were asking, "Who's he?"

As Sen. Kennedy worked his way from college humor to the more serious part of his talk, the young people listened intently and broke into applause and shouts at various points, particularly with regard to the draft and Vietnam.

The big push toward Sen. Kennedy came when he left the platform. He had intended to go by foot across the shopping center to the Flaming Pit for the reception.

Members of the State Highway Patrol and Cape Girardeau police attempted to form a corridor for the walk, but it was tough as the crowd behind kept pushing forward against those in front.

By the time the Kennedy party had reached William street, the crowd could not be restrained. They surged forward on him and police said on several occasions he lost his balance and almost was knocked from his feet.

That was enough. After crossing William, the senator stepped into a convertible and rode the rest of the way.

At the Flaming Pit the senator was most affable as the crowd--kept as closely as possible to an invited list--moved through the Girardeau Room to shake his hand. He had a warm handclasp--hampered only slightly by a bloodied thumbnail, received in the earlier crowd--for everyone, along with the famous Kennedy smile and furrowed brow.

Mrs. Kennedy was most gracious and charmed the women with whom she chatted freely at the reception.

She moved about the room, quickly read name tags and called different persons by name just as if they were old friends. Many young people asked her to pose for photographs, which she did graciously.

Both on his arrival and again on his departure, Sen. Kennedy found large crowds--in the hundreds--at Municipal Airport. He made a particular effort to shake the hands of nuns in the crowds.

At the airport many parked on the roadway beside I-55 to get a view of the motorcade as it passed on the access road. Elsewhere along the route of travel motorists were stopped to catch a glimpse of the senator.

Estimating the crowd which viewed Sen. Kennedy was difficult. One of the best guesses was that 5,000 to 6,000 saw him at the Town Plaza. It could have been larger, because many stayed in cars and others were at a distance.

With those along the line of march and the large number at the airport, the figure could very well have risen to 8,000.

The senator cut a wide swath through generally conservative territory and whether or not he made future votes, he was an engaging personality for study.