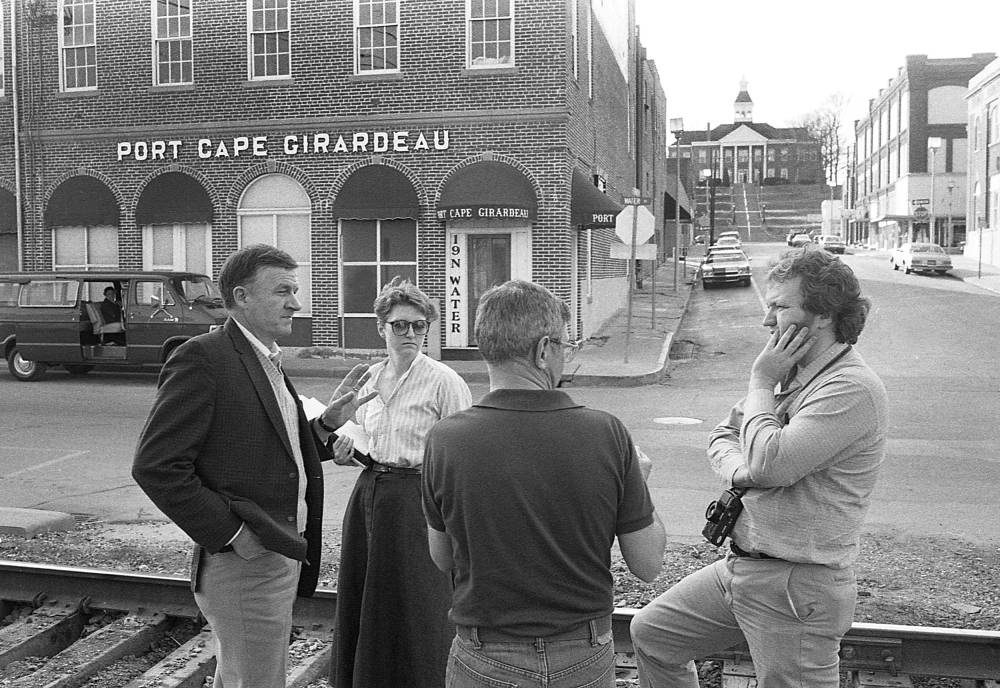 Two New York television specialists visited in Cape Girardeau Wednesday and today in preparation for the Great Amwell Company Inc. public television filming of its version of Mark Twain's novel, "Puddin'head Wilson," which is strongly believed to have been set in Cape Girardeau.

Visiting to gather on-site information and feeling about the setting of the pre-Civil War book were Amwell art director Bill Groom and costume director Linda Fisher.

For more than a year, members of the SEMO State University Regional History Center staff have been supplying Amwell with photographs, statistics and other information about Cape Girardeau in the 1830s to '50s.

As a spin-off of the visit, the university's London Study Center, to be initiated next fall, gained a guest lecturer in the person of David Yultz, costumer for the Royal Shakespear Company in London. Yultz, a colleague of Fisher, was in New York before returning to London to start costumes for the summer's Shakesperean productions at the Barbaran Theater. Having never seen the American Midwest, he decided to accompany Groom and Fisher here.

In conversation with Fred B. Goodwin, dean of the College of Humanities, Yultz mentioned that he had lectured on costume design in London, and was forthwith enlisted as a part of the university's new London studies program which will be directed by Henry Sessoms, chairman of the Department of English.

It was through the work of Goodwin two years ago, when he was asked by the Missouri Committee on the Humanities to go to New York as a script evaluator in response to Amwell's request to the National Endowment for the Humanities for partial funding for the venture, that Cape Girardeau was recognized as the setting for Twain's book.

Amwell, dedicated to doing a series of the great Missouri author's works in scholarly, well-researched fashion, has already done "Life on the Mississippi, "The Private History of a Campaign That Failed," and "The Innocents Abroad," and will start filming "Puddin'head Wilson" May 2.

In preparation for his meeting with Amwell staff two years ago, Goodwin re-read "Puddin'head," and concluded that Cape Girardeau was its logical locale.

He explained, "Twain said Dawson's Landing (the town's name in the book) was a half-day's journey south of St. Louis--that had to be Cape. The story starts in 1830, and the town was said to be 40 to 50 years old then--again, it fits. And the early editor of the Cape Girardeau Eagle was a man named William Dawson. Inasmuch as Twain was a newspaper person himself, he would have been likely to have picked a name for his fictitious town from some newsman he knew."

Goodwin met in New York with Amwell's executive producer, Bill Perry, Marshall Jamieson of the Nebraska Television Network, Pulitzer Prize winner and top U.S. Twain scholar Justin Kaplan, and scriptwriter Phillip Reisman (who has also done the Amwell scripts for "Life on the Mississippi" and "The Private History of a Campaign That Failed"). All agreed with the logic of his identification of Cape Girardeau as Dawson's Landing.

Ironically, however, "Puddin'head Wilson" will be filmed at Harper's Ferry, Virginia, where the waterfront still looks much as Cape Girardeau's did in the early to mid-1800s, its buildings not having been torn down or allowed to deteriorate.

Because "Puddin'head Wilson" deals with the issue of slavery, and tells of two children who look like twins (they had the same white father, but one was borne by the white wife, and the other by the black concubine), Groom and Fisher had many questions about slavery in Cape Girardeau for Robert White, director of the Regional History Center, and Arthur H. Mattingly.

The visitor wanted to know how slaves were treated, how they were sold or traded, what kinds of individuals engaged in slave trade, what kinds of pens or other accommodations slaves were kept in pending sale, what slaves wore, whether they were allowed to work for persons other than their owners for pay, where they were allowed to attend church, what the status of free blacks was--there were more questions than answers, inasmuch as records here are sketchy.

White provided lists of persons who owned slaves at that period, accounts of slave sales, court records regarding transactions, and related data. He and Mattingly cited differences in general conditions in Missouri at the time in which the book is set.

Groom and Fisher were taken on an architectural tour of the older part of Cape Girardeau, seeing pre-Civil War buildings and homes, and examining the waterfront remnants of the era.

In addition to Goodwin's earlier having supplied Amwell with pertinent photographs, White showed the visitors slides from the Regional History Center's collection, and answered further questions about architecture and lifestyle.