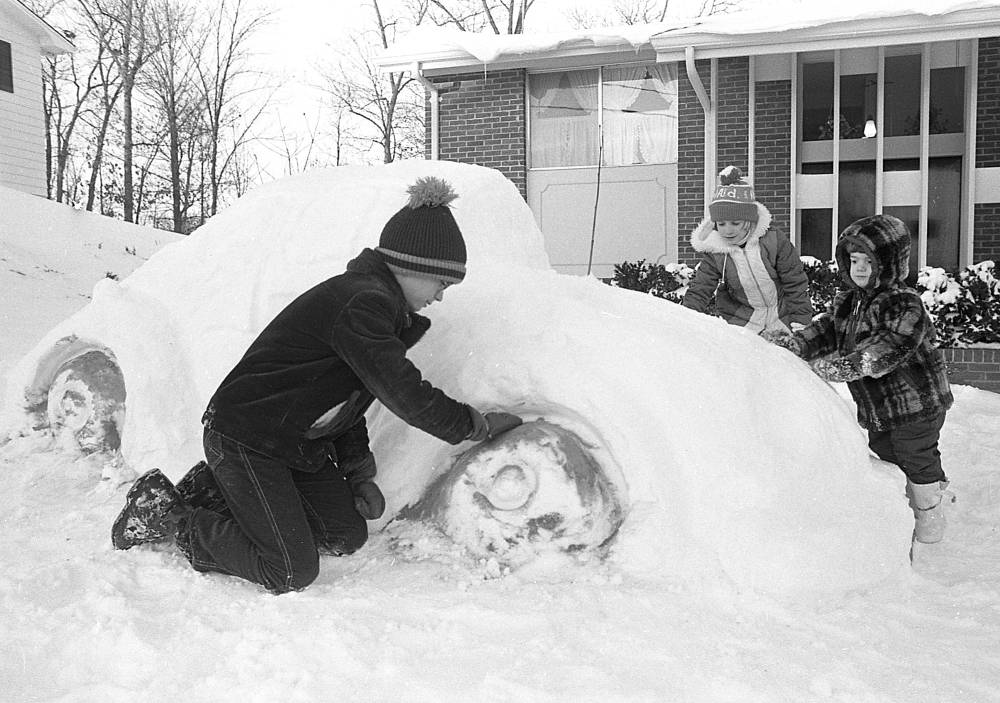 Order this photoThe children of Mr. and Mrs. Eugene J. Parker, Max, 11, Dottie, 8, and Gregory, 3, of Cape Girardeau used the snow to make a replica of the family's 1975 Volkswagen, using water to make the snow stick and ashes to color the wheels in this photo published Jan. 11, 1977. Below, an unpublished image shows motorists driving carefully on Broadway at Caruthers Avenue as snow falls that day. See a recent photo of the area below the story. (Fred Lynch photos) 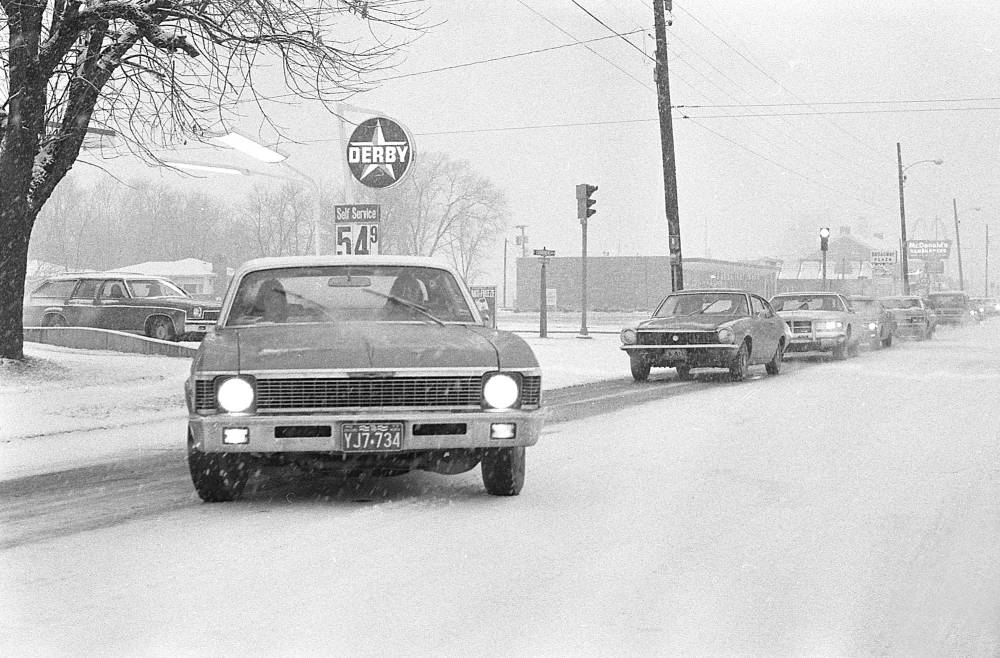 The one-two punch of deep snow and sub-zero temperatures have given Cape County the worst fit of winter weather in recent memory.

The official low recorded early this morning at Cape Girardeau Municipal Airport showed a bone-chilling 18 below zero, only 10 degrees shy of the record low set Feb. 13, 1899.

The onslaught of bitter weather has caused three ice gorges on the Mississippi River south of here, brought a deluge of calls to service stations from motorists with dead batteries in their vehicles, and put a near-record demand on natural gas supplies. Frozen pipes also were reported.

Not since the terrible winter of 1917-18 has the area shivered under both a blizzard and sub-zero temperatures which dropped into the negative teens.

In the area, other towns reported similar frigid temperatures with Fredericktown the lowest with a minus 24. Marble Hill reported minus 20, and Jackson reported minus 19.

The Federal Aviation Administration Weather Flight Service reports that a chain of three high pressure areas - one in southern Canada, one over the Dakotas and one over the Bootheel, are dragging down the cold Canadian air with their clockwise winds.

On the bright side, the weather service says, once the highs move to the east of this area, the clockwise winds will draw up the warm Gulf air. In the meantime area residents must cope with the cold the best way they can.

Local service stations with wrecker services reported an average of 20 calls this morning from motorists who discovered the frigid temperatures had robbed their car batteries of starting power. Jump starts were the remedy for some while others found a new battery the only solution. Once the cars drove onto city streets, the drivers noted little improvement over Monday's snow-packed and slippery driving conditions.

Police traffic officials estimate 95 percent of the accidents since Sunday are snow related. On Sunday, 40 accidents were reported and the number has been steadily climbing. Since the first of the year, there have been 80 accidents, police said.

However, Mr. Branum said the utilities firm has enough natural gas and propane to meet demands made by the harsh weather.

"If the major industrial and commercial users stay on their stand-by status, we will have plenty of gas for heating homes," he stated.

"Most of our lines are buried deep enough the temperature does not affect them. The snow also acts as insulation over the pipes," he stated.

Area plumbers also have not received many calls of frozen water pipes to date, but they are expecting the sub-zero temperature to bring a deluge of calls in soon. And when the thaw comes, residents will know which of the frozen pipes have broken.

John Goodman Plumbing and Heating, 15 South Frederick, reports pipes are freezing in homes where pipes have never frozen before. Mrs. Goodman said she expects the calls to mount as frozen pipes are discovered.

Robert C. Brock of Associated Natural Gas Co. at Jackson said there were a minimum number of problems with gas supplies. Residences along a rural road between Cape Girardeau and Jackson were without heat early this morning, but the problem was quickly solved.

Most rural routes were passable today, but some still had not been plowed by the County Highway workers, who were continuing snow removal operations today, as was the state Highway Department and Cape Special Road District.

"It went better than we had expected," Mr. Wessel said. Most of the boxholders did not receive mail because carriers could not drive up to mailboxes because of plowed snow around them, he said.

The eastern third of Jackson and an area between Cape Girardeau and Jackson was left without electrical power for about an hour Monday afternoon when voltage dropped on a feeder line from Union Electric to Missouri Utilities, a company spokesman said.

Boatmen reported three ice gorges in the river bends and it winds around the lower boundary of Illinois. The gorges are reported at Greenfield Bend, Dogtooth Bend and Scutter's Bend. The ice is also close to gorging at Gray's Point, about five miles south of here, Mr. Rushing said.

Much of the ice floes are already nine feet deep, the same depth as a tow. Once they drag bottom, they slow down and stop and the loose ice packs in around them," he said.

In the city, both road graders are grading streets and trucks are putting sand on hills and intersections, L.W. McDowell, superintendent of the Public Works Department said.

The city Park Department said today they have no plans for cleaning the snow off the lagoon in Capaha Park to allow ice skating. Because the snow insulates the ice, the Park Department cannot determine if the ice is thick enough to support a man to clean off the snow.

While the city and area schools remained closed today, decisions are pending about opening them Wednesday. 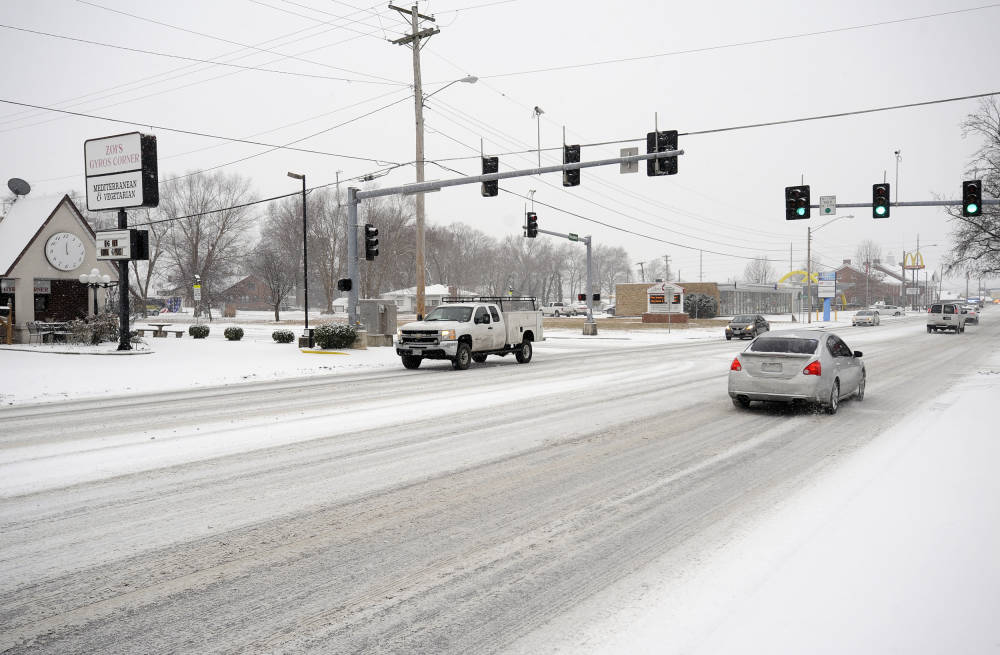 Order this photoTraffic at Broadway and Caruthers Avenue is seen Jan. 15, 2018.