Rush Limbaugh gets 'Gift of Gab' from family 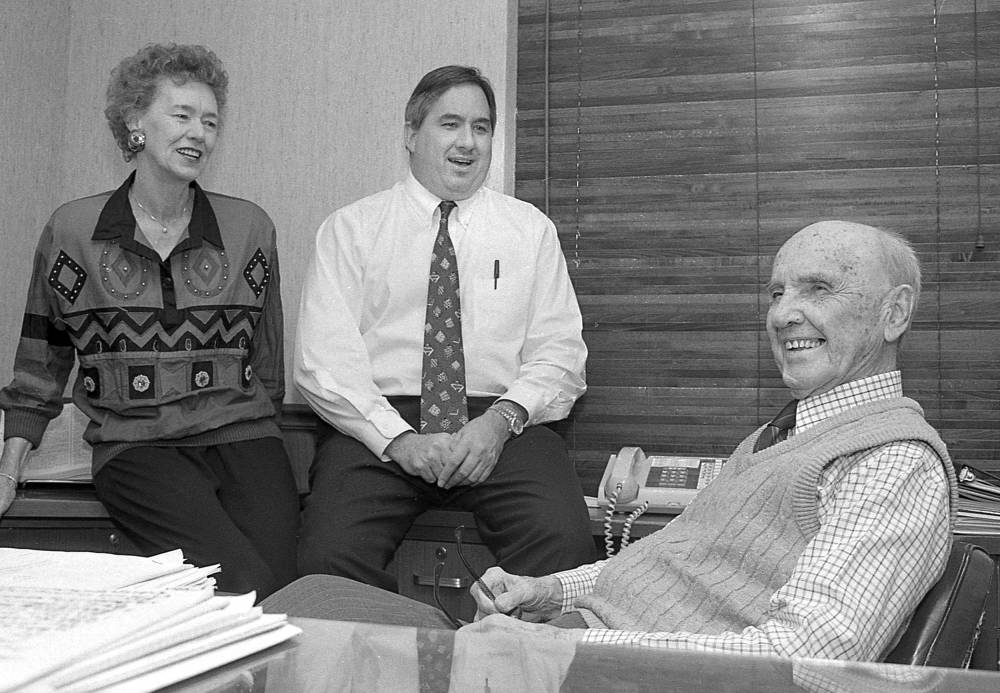 Talk-show host Limbaugh gets it from his family

By R.B. Fallstrom, The Associated Press

CAPE GIRARDEAU -- It's easy to spot where Rush Limbaugh got his gift of gab. The whole family loves to talk.

"Don't get me off on a tangent," said Limbaugh's kid brother, David, a lawyer who hardly needed help in a rambling 90-minute interview.

Rush Limbaugh Sr., 101, patriarch of the family and the talk-show host's grandfather, is a living history book.

The oldest practicing lawyer in Missouri--perhaps in the nation, although the American Bar Association doesn't track attorneys past age 80--he wistfully recalls the good old days of Teddy Roosevelt and the Bull Moose Party.

"I'm going to tell you something that you don't know and that very few people know," he said and started to spin another tale.

Millie, young Rush's mother, thinks nothing of interrupting a bridge party to talk to a reporter on the phone.

It's the Limbaugh legacy.

Even without Rush, the Limbaughs are one of the most successful families in Missouri. One of Rush Sr.'s sons, Stephen, is a U.S. District Court judge in St. Louis. His grandson, Stephen Jr., sits on the Missouri Supreme Court.

There also are two lawyers and a bank president in the family--Republicans all, just like Rush, or "Rusty" to his family.

They're also every bit as staunch and opinionated as the celebrated syndicated right-wing radio and television talk-show host.

David, at 40, two years younger than Rush, handles his brother's affairs. Like Rush, he has a knack for jumping from topic to topic with ease:

--Filmmaker Spike Lee: "He's imbued with hatred toward whites. I totally resent black racism, and it doesn't make me a racist to point it out, or my brother. It makes us a bunch of idiots if we don't. Why is (Lee) not held accountable?"

--The Rodney King police beating verdict: "Let's say the jurors were racists, all of them. Don't you think they would care more for their own skins than their prejudices? I think they were honorable to have the guts to acquit those people...even if they got a little out of hand."

--Liberals: "I think they think they have a monopoly on compassion or something."

--On Rush: "My brother has a reputation among the cultural elite as being hateful to the real extreme, but they watch him, or when they hear him a lot of people are softened up. They find he's not as big an ogre as they've heard he was. I think he attempts to lampoon the left and just point out hypocrisies. Sometimes he'll push the envelope a little bit in his tweaking, I won't deny that."

David said he talks with Rush daily, mostly about business matters, but not always. "A lot of times, we just talk about stuff," he said. "Yeah, if I have an idea, I'll give it to Rush. Most of them are his own, though."

Rush Sr. knows where his celebrated grandson picked up his knack for talking: heredity. Rush Sr.'s sister was a schoolteacher and bought him a volume of speeches to study when he was 11 years old.

"Now, this boy has followed that bent for public speaking. He's developed a following that I never thought anybody would do from this area. He's phenomenal."

Rush Sr. says he was never as outspoken as his grandson, though.

"He says some things sometimes that I wouldn't say," he said. "But I don't pay any attention to the things that I dislike about it. I marvel at what he's done. I'm exceedingly proud of him."

David points out that his older brother is heard on 530 radio stations and can reach 97 percent of the country's TV audience. The lone holdout is Washington, D.C.

"He's just not radical in the extreme like the liberals want to paint him, he's not at all," David said.

"But he's unafraid to make fun of them, and it just drives the liberals crazy."