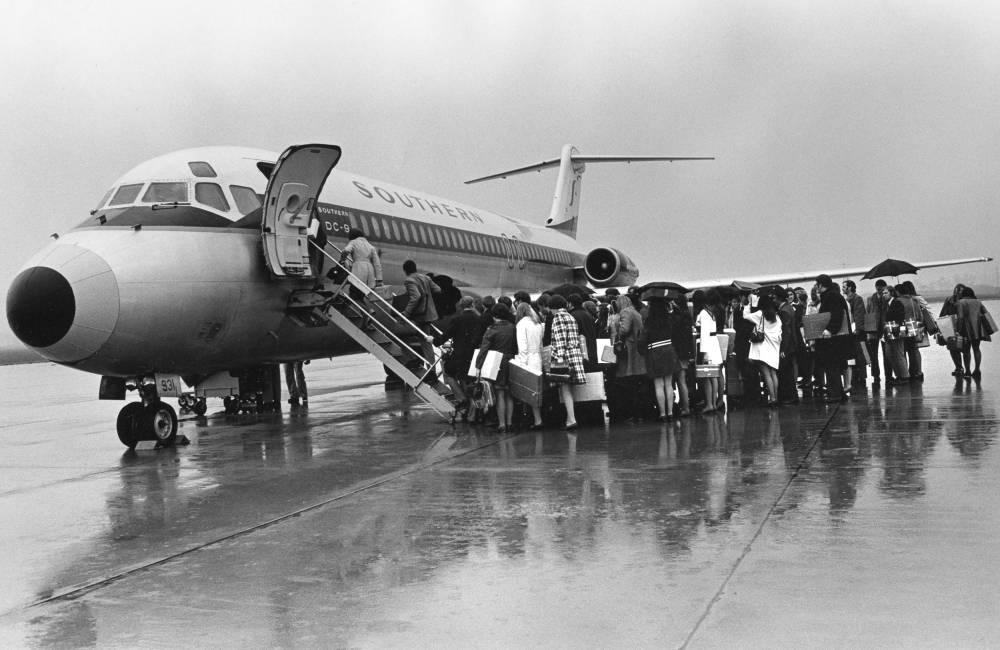 Not even the pea soup weather could keep the Golden Eagles from spreading their wings today--even if departure was late.

One planeload of the State College group got off the Municipal Airport runway about 11:30 this morning for the 2 1/2-hour flight to Miami, Florida, for their sunshine respite from miserable Missouri weather. The second jet plane, coming from Memphis, Tennessee, was delayed by the bad weather but was expected to make its liftoff this afternoon.

The jet was forced to fly a holding pattern for half an hour. The plane could be heard over Municipal Airport but was not seen because of the dense fog. For awhile the craft circled over Malden. The plane finally landed but water covering the runway caused another delay.

A lot of people during the night worried that the weather might keep them grounded. But the two Southern Airlines DC9s came in--though late--instruments and luggage went aboard and the band looked hopefully to the appearance Sunday afternoon at halftime of the Baltimore Colts-Dallas Cowboys epic appearance in the National Football League's championship contest.

The bandsmen received their final instructions at a rehearsal Tuesday night in the Music Building during which they were admonished by Director LeRoy Mason that there were to be no shorts, no cutoffs, no sweat shirts or Levis. "Dress up," they were told, so they could properly represent the college and Missouri in Miami.

At Miami, upon arrival of the two planes, they were to be met by buses of the Metropolitan Bus Co. for transportation to the McAllister Hotel. A rehearsal was scheduled immediately after registration. The appearance of the band Sunday afternoon in the Orange Bowl will mark the 17th time--the third this academic year--the Golden Eagles have performed at a televised professional football game. This view of them will be to an audience of millions nationwide. Others this year were regional.

It will be their third appearance in the Orange Bowl. They presented the halftime performance at the play-off bowl games in 1965 and 1969 which matched the runners-up in the league. These appearances were also televised nationwide. Viewers Sunday over Channel 6 in this area will see the band come on the field before the game.

Two Miami high school bands, neither of which will play, will be present to provide the color for formation of the National Football League shield. There will be 26 stars, one for each professional football team, on a banner which will stretch from the 45 yard line into the end zone. The Golden Eagles will play the Orange Bowl March and the Star Spangled Banner in this opening ceremony and then march off the field.

The halftime show will last for 13 minutes, with 5 1/2 minutes of this time devoted solely to the Golden Eagles in their marching performance. The full 13 minutes will be carried by the National Broadcasting Co.

A multitude of floats, marking the teams of the NFL, will be put around the perimeter of the field. The two high school bands will form an outline map of the United States around the field. Miss Anita Bryant, the nationally-known singer, will be on a central float showing the dome of the national Capitol and representing the Washington Redskins. She will sing "The Battle Hymn of the Republic" immediately after the California float arrives on the field.

Mr. Mason said the band will play as the floats leave the field, but this will not be on TV. Prior to the appearance the college band will engage in twice daily marching and playing rehearsals, the first this afternoon in the Orange Bowl. Others will be at Curtis Park, where the band rehearsed in its previous Miami appearances. Dress rehearsal is Saturday morning, and another possibly will be held Sunday morning.

Initial arrangements for the Super Bowl were made in September by Mr. Mason, and David Green, co-director of the band. They flew to Miami to confer with Orange Bowl officials and to draft the plans for the performance. Negotiations for the appearance have been made by Mr. Mason and Mr. Green with Ernest Seiler, vice president and executive secretary of the Orange Bowl committee, and Don McNamara, assistant to Mr. Seiler. 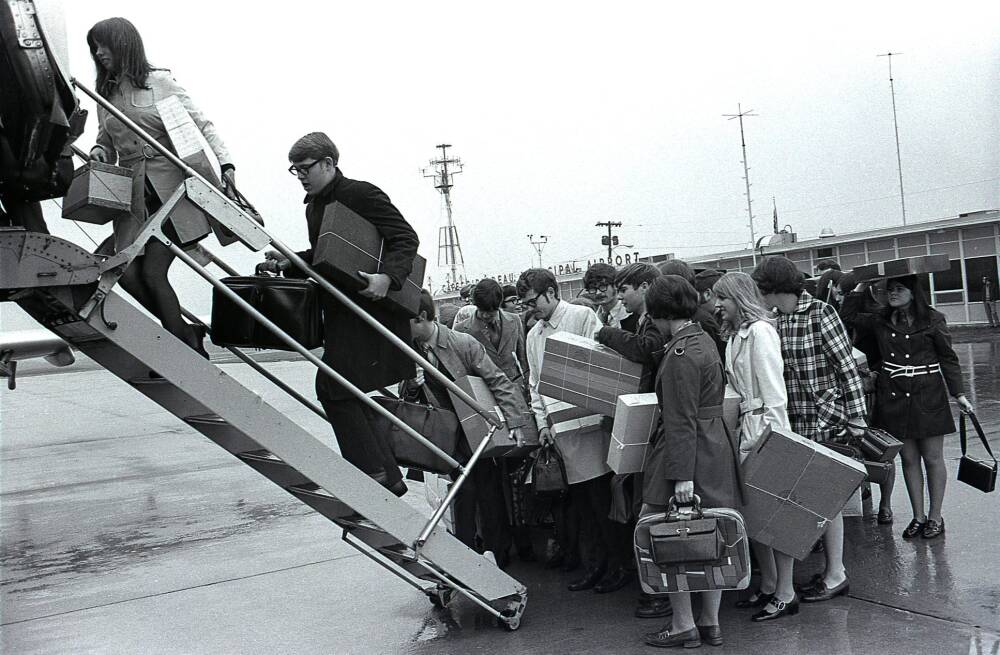 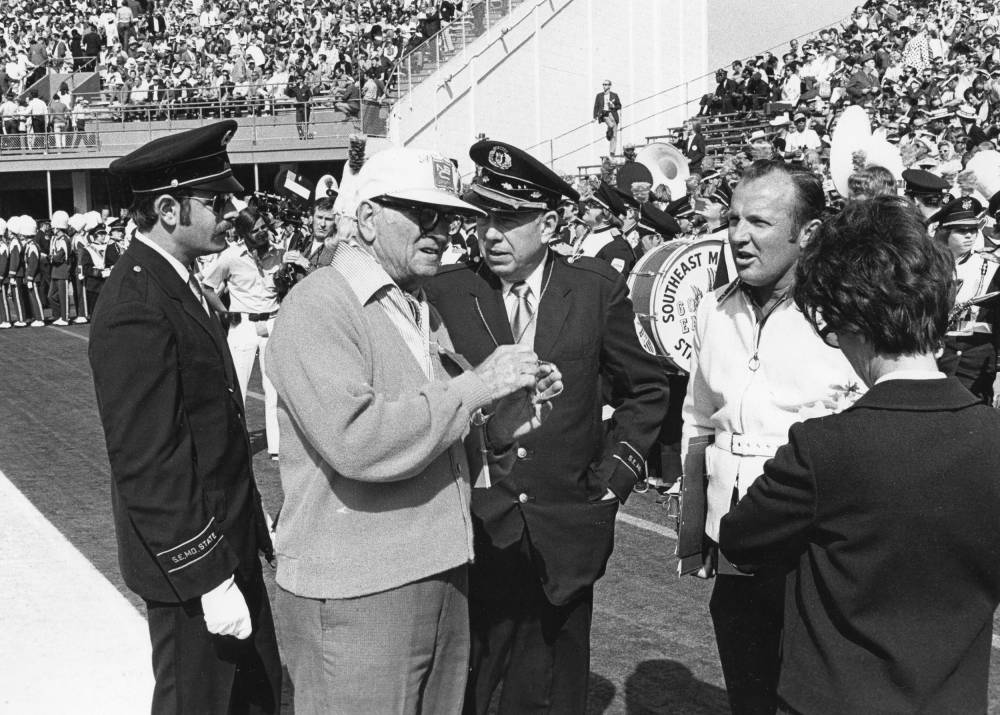 The sun was bright, the weather right Sunday for the State College Golden Eagles marching-playing performance in pre-game and halftime events for the NFL championship game between the Baltimore Colts and Dallas Cowboys in Miami's Orange Bowl. Above, Ernest E. Seiler, in sweater, executive secretary and vice president of the Orange Bowl committee, checks his watch in last-minute details before the game-opening show. The others are, from left, Assistant Director David Green, Director LeRoy Mason, Dan McNamara, assistant to Mr. Seiler and Miss Betty Graves, director of the Edison High School Cadettes which joined with South Dade County High to perform with the Eagles. Below, just before the march-on Miss Vicki Litzelfelner of Jackson, head majorette, stands between two rows of Golden Eagles ready to give the signal to start. See story below. (Southeast Missourian photos) 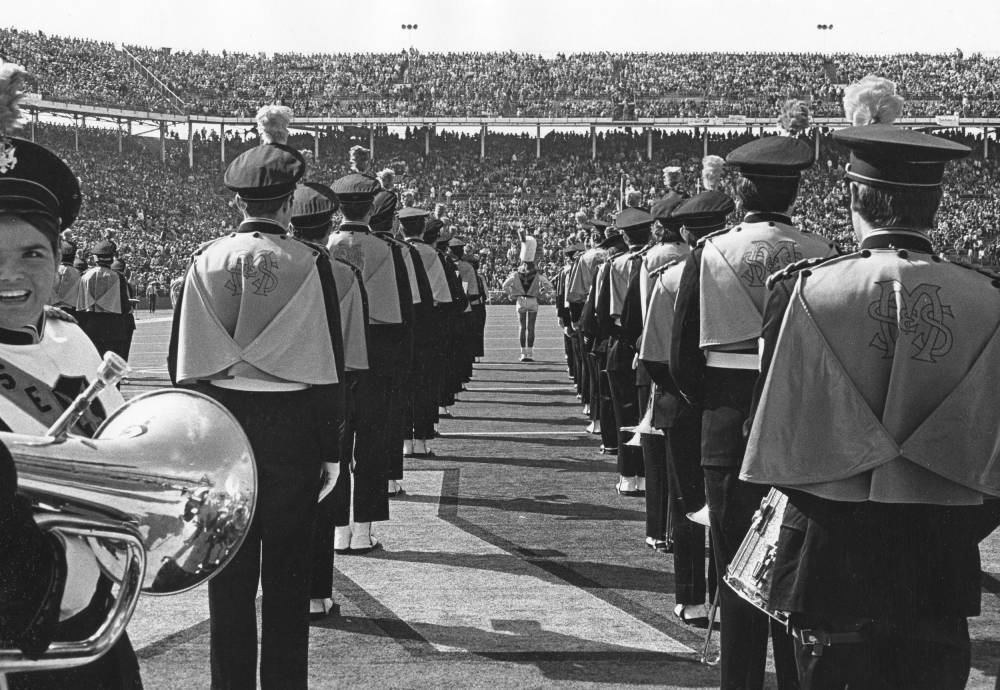 Everyone in Miami agrees--Golden Eagles super

The decision in Miami was that the State College Golden Eagles were super in the Super Bowl. The nation is the jury, however, and their decision should be forthcoming in just a few days.

It is expected to come in a flood of letters to the college and to Director LeRoy Mason. This has happened in every instance in which they have been on national television. To those who accompanied the Eagles to Miami, it seemed the band gave a great show. It seemed equally so to Orange Bowl officials who arranged and staged the performance.

Crowd reaction covered various ranges, depending on the particular portion. Opinion in Cape Girardeau, necessarily biased, was that the Golden Eagles had a great show. Cheers rang out as the band played and Golden Eagle announcer Donald T. McNeely read off the names of each of the teams in the National Football League as the pre-game show got underway. As each name was called, pupils from bands of South Dade and Edison High Schools in Miami turned up stars on which the name of each was printed.

Shouts rolled from different sections of the stands as partisans of each sounded off. They reached a crescendo as Mr. McNeely called out Dallas and Baltimore. The band's 5 1/2-minute performance to start a spectacular and brilliantly colorful halftime extravaganza, drew hand clapping and cheers from the 80,000-plus crowd, but was not as uproarious as it was for a different type show staged by the Eagles in early November in Kansas City.

This was different, however. This show moved much more quickly and there was no pause from one part to another. Those in the upper tiers, who had an on-high view of the field, showed appreciation for the band's marquee marching as it spelled out "Super Bowl Champs." The real thrill for the 160-member band was, however, reserved for the climax of the show--the appearance of TV star Anita Bryant and their accompaniment as she sang the stirring words of "The Battle Hymn of the Republic."

The arrangement for this number was by Miss Bryant's musical director, Charles Bird, and had been sent several weeks ago to Mr. Mason and the assistant director, David Green. Mr. Green repeatedly rehearsed the band in the arrangement, which was adapted for band purposes from Miss Bryant's recording of the number.

The band had it down perfect under his direction here, but would they adapt to Mr. Bird's direction when they got to the Super Bowl? Band members said they were nervous Saturday morning at dress rehearsal as Mr. Bird took over direction of the number from the portable stand that overlooked them.

They had no reason to be. It was well done on the first time around as they responded to his authoritative directions. The second time it went off without a hitch. Consequently, there was confidence under Mr. Bird's direction when Miss Bryant sang. Band members said they were thrilled to play for him and for Miss Bryant.

They played flawlessly as she gave a brilliant rendition of the national hymn. The crowd hushed and stadium noises ceased as she sang. The full 80,000 gave undivided attention and spines tingled as her lovely voice went over the public address system and out to the nation. Applause was deafening as she finished and continued as she waved and acknowledged the reception when her float left the field.

After the show was over, Ernest E. Seiler, executive secretary and executive vice president of the Orange Bowl committee, and Dan McNamara, his assistant, were enthusiastic.

"Great show. Great show," said Mr. McNamara, who had the difficult task of field coordination. Both Orange Bowl officials said a number of times that the Golden Eagles were the best disciplined and easiest band to work with in their experience.

This was the third time around for the State College musical organization which played in the Orange Bowl in 1965 and 1969 in the Pro Play-off Bowl halftime programs.

Mr. McNamara passed on to Mr. Mason and Mr. Green the comment of Miss Bryant. "It was the best band," he said she told him, "I have ever worked with." She was most gracious to band members. Saturday forenoon at rehearsal she signed many autographs--even on an orange--and waved and smiled to them as they delivered a cheer to her after they left the field. Similarly on Sunday, as her float passed them following the performance, she waved her appreciation to them.

In both pre-game and halftime performances, NFL cameramen moved about the field filming both shows. It is expected segments will appear in the film of the game and perhaps in other films produced by the NFL.

The first planeload of Golden Eagles was delayed at Miami Airport until its turn came to take off in the crush of planes departing with Super Bowl fans to all parts of the country. Aboard it were those members who had the earliest semester examinations today.

The plane met 140-knot headwinds en route to Cape Girardeau and had to divert to Memphis, Tennessee to refuel. It arrived about 9:30 and was met by a large crowd of students, parents and friends as spitting snow presented a startling contract to the orange blossom weather in Miami.

It was a weary second planeload which arrived in Cape Girardeau at 4:30 a.m. today. Mr. Mason said the Southern Airways plane which brought the first group here flew the 140-knot tailwind back to Miami in 1 hour 45 minutes.

But it had to fight the same wind coming back and stopped at Atlanta, Georgia to refuel. The band members waited in the Miami International Airport terminal the several hours before the plane returned and took off.

Read more about the Golden Eagles and its director, LeRoy F. Mason, in this previous blog: