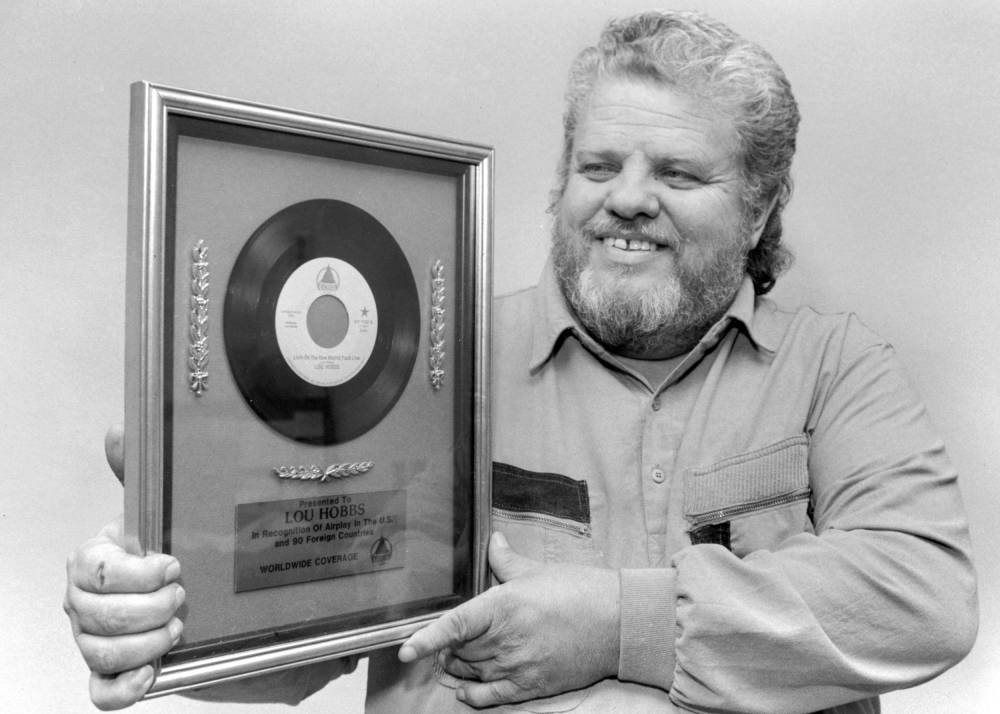 Lou Hobbs shows the plaque that he received commemorating his song about "Living on the New Madrid Fault Line." The song has received airplay in 90 countries. (Fred Lynch photo)

"Lately I feel a little nervous about my section of the land of the free,

living on the New Madrid fault line, something's shakin', Lord, I hope it's just me."

In 1989 Lou Hobbs was watching a TV report about the massive destruction caused by the Loma Prieta earthquake in the San Francisco Bay Area when it occurred to him that the ground under his own feet wasn't all that secure itself.

It took an hour for the Cape Girardeau country singer to write "Living on the New Madrid Fault Line," a tune which preached a day-to-day approach to life in earthquake country. But his record company in Nashville thought the song's appeal was too localized, and that was that. Or so he thought.

Then came along scientist Iben Browning predicting there was half a chance a 6.5 quake would occur along the New Madrid fault on Dec. 3, 1990.

Browning's prognostication created quite a tizzy, most everyone will recall. Schools planned to close, the National Guard conveniently called an earthquake preparedness drill for that weekend, and lots of people found it necessary to be out of the state in early December.

A month before the earthquake was due, Hobbs was struck by the realization that he'd already written the score for the movie that was unspooling. "I said, 'I must be crazy,'" he recalled.

The record company still wasn't sold on the song, but before they could get moving Hobbs already had become the troubadour of the great New Madrid earthquake-to-come.

Local radio stations played the tune first. "Then St. Louis got hold of it," Hobbs said. "They started hollering for it over the radio stations, and the next day there were two satellite trucks parked outside...."

The Midwestern, national and international media fell upon New Madrid in December 1990 ravenous for local color. And Hobbs, who hosts his own TV show on KFVS-TV and has been fronting bands for decades, was playing their song.

"Nightline," "Good Morning America," "A Current Affair," practically every major news organization in the world had him sing the song for them, accompanied only by his guitar.

"After I did all the networks, I did all the affiliates, about 50 of them," Hobbs said. "I sang the song about 150 times over a two-day period."

Some 50 radio stations around the country called him for interviews just before E-Day. "I sang it to them over the phone," Hobbs said.

The record itself didn't have much of a life, since it was only out for 10 days before Iben Browning's prediction fell flat.

But two years later the song has been heard in shows, films or concerts in 23 countries across the world, among them Uruguay, Czechoslovakia, Spain, Italy and Sweden.

BMI, one of two major organizations which track airplay for recording artists, has just sent Hobbs a royalty check and a plaque commemorating the song's worldwide sales.

Hobbs is a veteran of the music business wars, but this accomplishment will get a well-lit place on his wall.

"I've had six chart singles, but this is the first thing I have written that went worldwide," he said.

BMI notified Hobbs that the song actually has been played in 90 countries, but many of those do not have airplay agreements.

These days Hobbs devotes most of his performing time to his TV show and to promoting the Drug Abuse Resistance and Education (DARE).

He has a new gospel CD, "Lady Lost in Spirit," being distributed by mail nationally.

The earthquake hubbub may be a dimming memory, but Hobb's song quickly brings it back:

the old Mississippi ran backwards, the earth sank and lakes began to swell;

the good Lord he put us all here and only he's gonna take us away,

living on the New Madrid fault line, you gotta live it day by day."