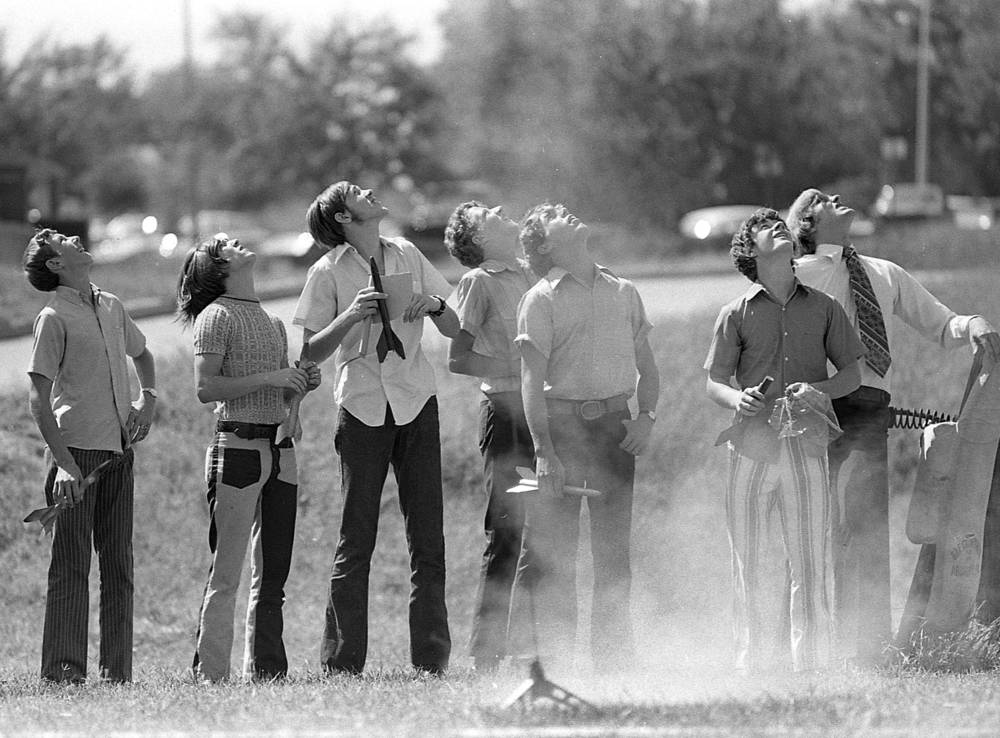 Although their rockets won't travel high enough to reach outer space, these College High School pupils, above, watch with interest as one of their rockets zooms skyward about 400 feet. Exhaust trail from rocket and launching platform are in center foreground as pupils holding rockets await their turns. Below, Danny Hahn runs after his wind-blown rocket as it returns by parachute. (Gordon L. McBride photos) 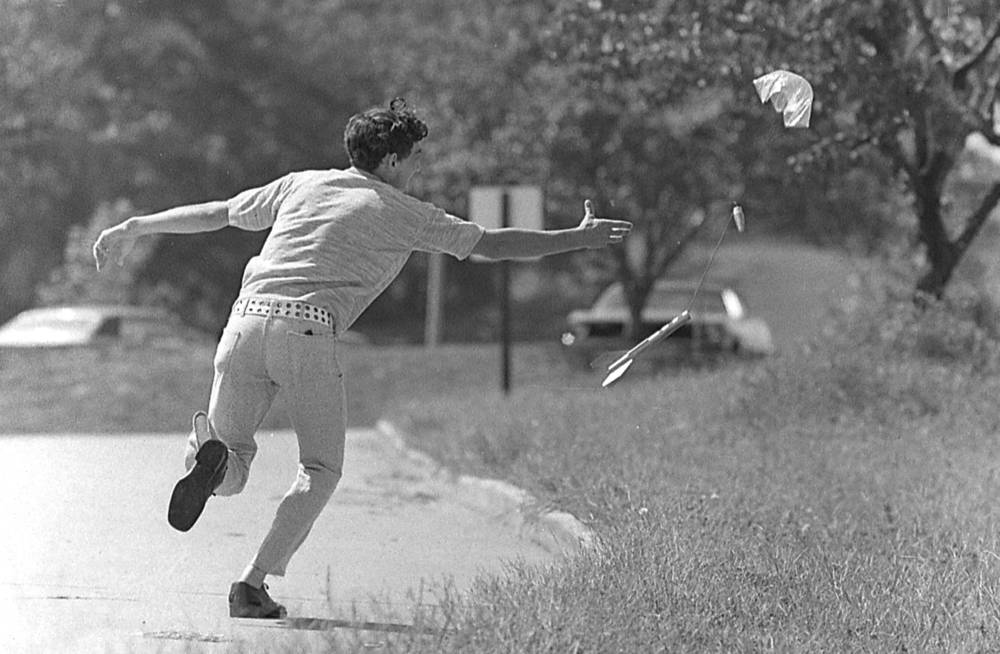 Building rockets can not only be fun but educational as well for pupils in a new industrial arts course at College High School.

Pupils learned how a rocket works, how to construct one and, finally, built and launched them Tuesday to see how well they had learned the basic concepts of rocketry in a course called "World of Manufacturing."

The class, composed of 14 tenth and twelfth graders, is taught by Ralph Pittman and his student teacher, Tim Penzel, and introduces the pupils to about 82 occupations in manufacturing.

"World of Manufacturing" and "World of Construction," a course taught to 17 eighth and ninth graders at the school, combined are the Industrial Arts Curriculum Project, a replacement for the standard industrial arts classes designed through an initial study in 1967 at Ohio State University and by McKnight and McKnight Publishing Co.

Mr. Pittman said this is the first real change in the industrial arts program in over 100 years. College High School is the third school in Missouri to adopt the new curriculum.

"The course uses the conceptual approach to career education. The pupils are graded on how well they understand these concepts, rather than how well they perform skills with their hands," the instructor said.

"The course is highly relevant. It gives the pupil something he can take home not only physically--such as the rocket--but mentally as well--the concept," Mr. Pittman continued. "It also gives the student an awareness of careers and areas of manufacturing, so he can decide what particular ones he wants to study later."

The section on rocketry lasted for eight days and included a study of the concepts of propulsion and individually produced items. Each pupil built his own rocket from scratch, producing all parts except the engines.

Later in the course, the pupils will build a CO2 race car, again to study propulsion and individuality in design, and in other units study forging, casting of metals and plastics, sheet metals, electricity and woodworking, each time building a project which is relevant in today's world.

For the rockets, the pupils first built an airframe from paper and then in the following days constructed fin assemblies, engine mounts and a nose cone and recovery system. After assembling the rocket, they added a launch lug--a guiding mechanism used in launching the rocket.

Pupils were allowed to paint their rockets in a design of their choice, but were cautioned that too much paint or roughness on the surface of their rocket could produce friction with the air and cause drag which would cut down on the rocket's speed and altitude.

Engines manufactured especially for model rocketry were used containing a solid fuel propellant. A car battery was used as the tool of ignition.

As the rockets were launched from the platform, eyes gazed skyward as many of the missiles rose to 400 or 500 feet. As they reached their apogee, the parachutes popped out of the nose cones and brought the rockets gently down.

Just as most of the rockets were successful, the class also has been a success. Mr. Pittman says it has been more relevant and interesting to pupils than industrial arts and the pupils have shown a greater amount of enthusiasm.