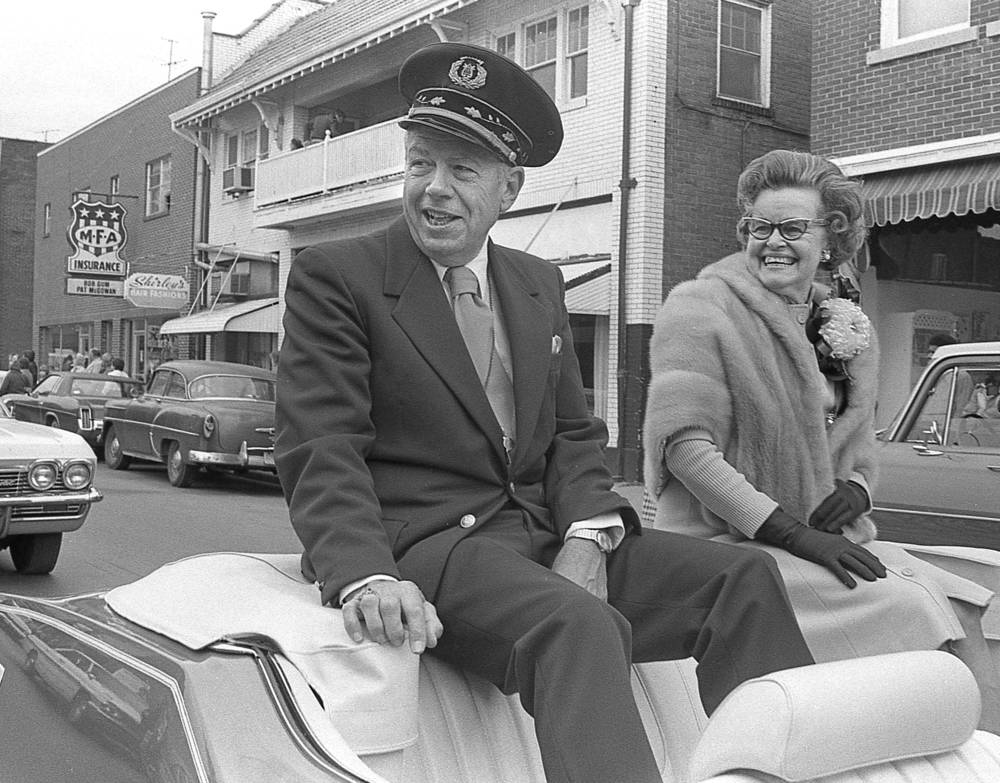 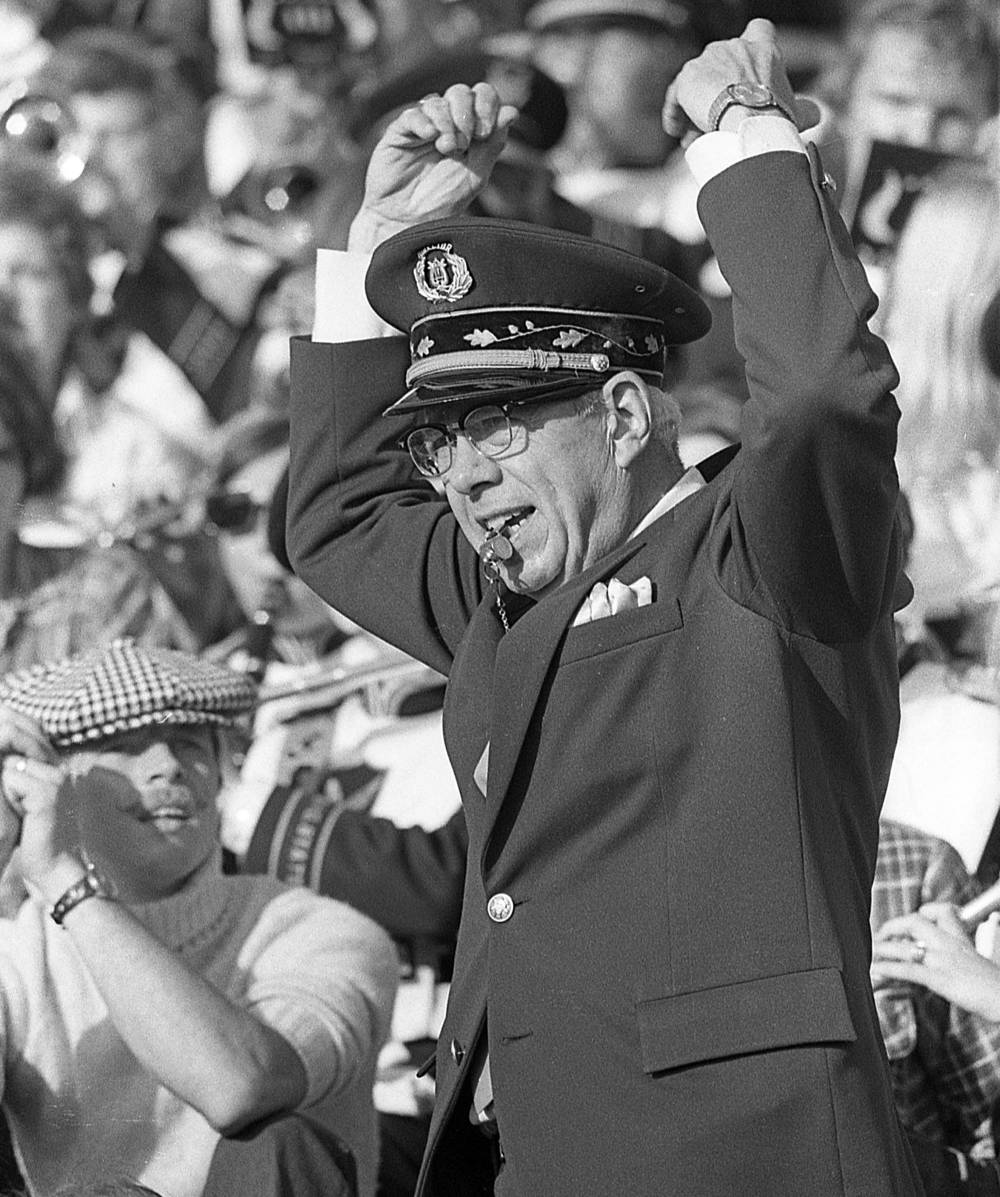 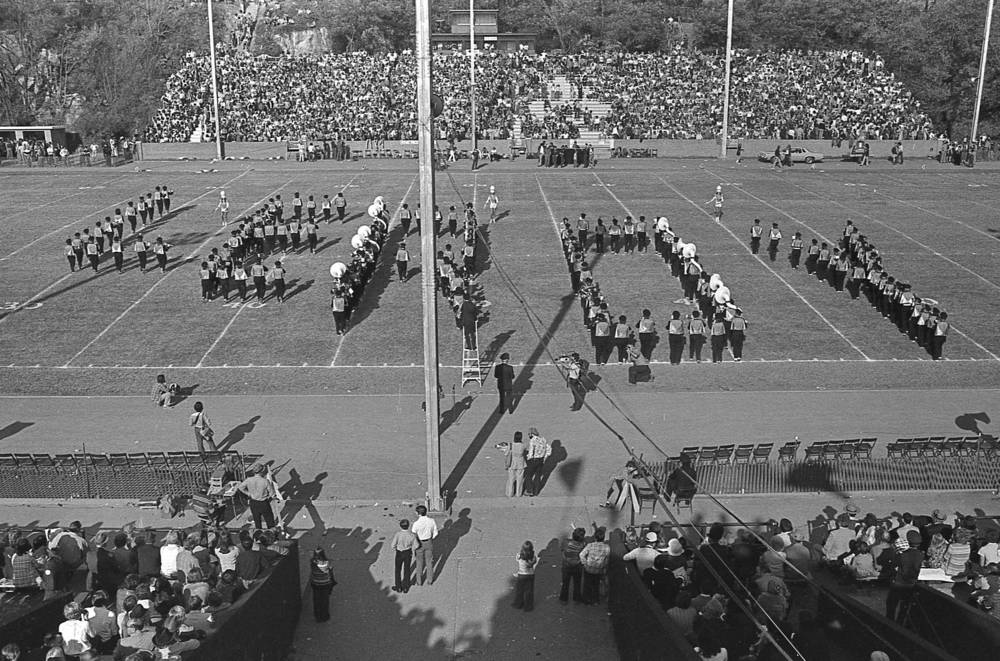 The Golden Eagles Band pays tribute to its retiring director, LeRoy F. Mason, with a special formation of his name on the field while playing "A Jolly Good Fellow" at halftime. See story below. (Gordon L. McBride photos) 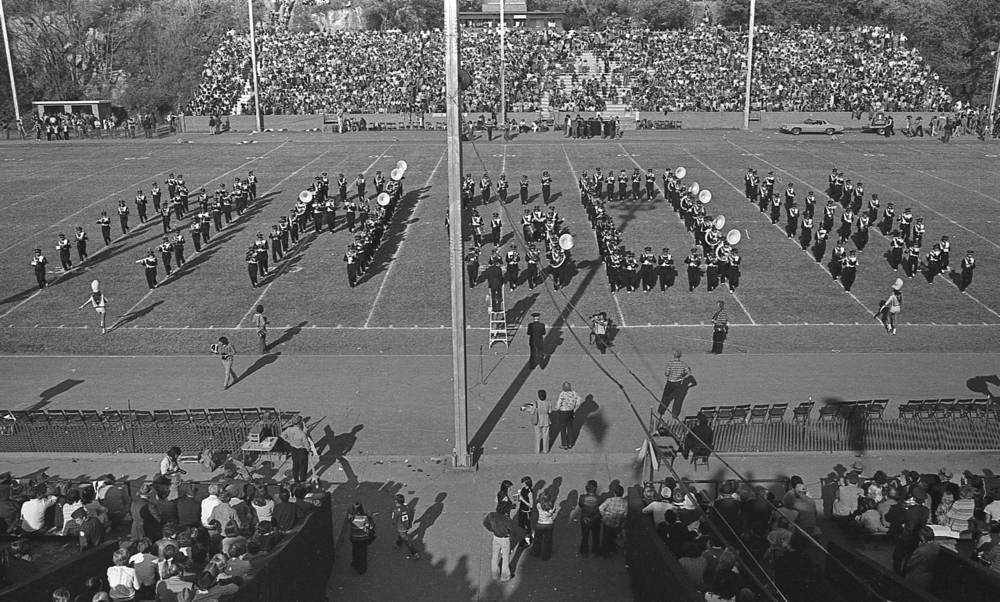 The eagle is a proud, majestic bird.

And the SEMO State University Golden Eagles are nothing short of majestic themselves, a source of pride both to the 7,700-student university, its townspeople and the band's director for the past 19 years, LeRoy F. Mason.

Saturday's halftime performance during the gridiron clash between the SEMO Indians and the Maryville Bearcats marked the last Homecoming performance for Mr. Mason, who is retiring at the end of the school year, and featured a surprise ceremony completely planned by the 170-member band to recognize the dedication and hard work its director has heaped upon the group to turn it into a nationally-known musical body. From 1957 until 1975, 1,100 members have marched with the top-notch band.

Indeed surprised when the Eagles broke from planned formation first into "LeRoy," and then marching across the field to its director in "Mason" to the tune of "A Jolly Good Fellow," Mr. Mason earlier admitted that each performance of the band is much like a stage debut. There are the traditional butterflies, then satisfaction at seeing the show well performed and well received.

Presented a gold watch and a bouquet of roses from the band, which secretly practiced the complicated surprise formation during the weeks prior to Homecoming, Mr. Mason was thanked for his years leading the band by the best way they could conceive--with a special show.

One time a coronet and baritone in his college band, Mr. Mason admits he's been much too busy to take the role of instrumentalist in nearly 35 years.

Poring over diagrams, selecting music and planning theme shows are very much a part of being a band director, said Mr. Mason. "I don't think there's ever an hour any day that a band director isn't thinking about what he's going to do next year." Preparation on programs operates a full year in advance.

The only kind of eagle Mr. Mason hasn't got in his office is a live one. There are eagles everywhere--on the wall, on the desk, framed, as statues. "One time a band director was in here and he counted 34 eagles," Mr. Mason admitted. "I've taken a lot of them home now, but there are still plenty. For the past 19 years you could say the eagle has been my favorite bird."

Perhaps the marching marquee is one of the band's most recognized trademarks. While Mr. Mason declines to say whether he invented the marquee or not, he conceived the idea when he happened upon a set of lighted letters moving across an advertising display at a Cape Girardeau jewelry store. The first marquee took 30 hours to plan.

It's done once each year, and is a real crowd pleaser, Mr. Mason said. Old, familiar tunes are the most popular ones and appearing before a stadium crowd calls for "entertainment, pure and simple," according to the venerable director's philosophy.

Toting his familiar bullhorn, whistle around his neck, often wearing a Golden Eagles windbreaker, at practices Mr. Mason deals with his band with an iron hand, but not without a real sense of rapport, humor and fairness. He and associate director David Green often watch practice from atop an 18-foot tower, although Mr. Mason is likely to take a vantage point on a high bank overlooking the practice field behind the J.C. Brandt Music Building.

Since coming to SEMO after 18 years at nearby Jackson High School, Mr. Mason has watched his Eagles perform during televised professional football games 23 times, including 16 performances for the St. Louis Cardinals and a spectacular performance at the 1971 Super Bowl, a record that entitles the band to claim more national television time than any other band in the country the past 16 years.

A flair for showmanship, a love for music and an idea that the band should never stop improving has paid off for Mr. Mason, who has earned the respect of his bands--comprised of music majors as well as those majoring in other areas but sharing a common bond through a love for music. Saturday's surprise, said one bandsman, "was something we just wanted to do--everybody. He's a great guy, and we just wanted him to know we think so."

The Southeast Missourian reported on the Homecoming:

More than 100 organizations participated in the parade, delighting crowds with high-stepping twirlers, clowns, and toe-tapping marches played by the Golden Eagles Band and many area high school bands.

More than 9,500 excited spectators jammed into Houck Stadium to watch the SEMO Indians trounce the Maryville Bearcats by a score of 41 to 7.

Motels in the city were reported booked full, as hundreds of alumni returned to take part in the numerous Homecoming festivities. Saturday night the class of 1950 held a reunion dinner, as did the football team of 1955.

Read more about the history of the Golden Eagles Marching Band on this page by Southeast Missouri State University:

Southeast majorette performed during halftime of the 1971 Super Bowl