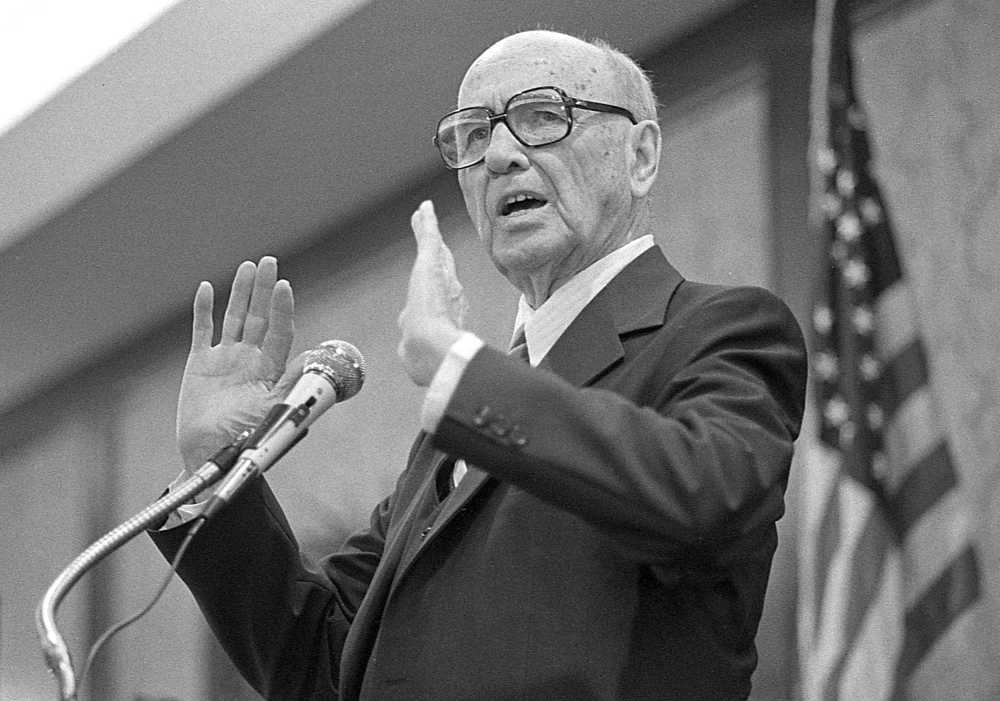 Rush Limbaugh, head of the Cape Girardeau Chamber of Commerce's subcommittee investigating a charter form of government for the city, explained at a chamber meeting today the advantages the city would have under a home-rule charter. A petition drive began today to gather signatures necessary to put the issue on the April general election ballot. (Fred Lynch photo)

A petition drive here, aimed at placing the home-rule charter form of government to a vote of the people in the April general election, kicked off today at the Chamber of Commerce First Friday coffee.

Cape Girardeau Mayor Paul W. Stehr, one of about 80 chamber members and guests present, was the first to sign his name to one of the petitions passed out to chamber members following the meeting.

Slightly more than 1,400 signatures of registered voters, a figure equal to 10 percent of the number of registered Cape Girardeau voters who cast ballots in this week's general election, will be required to place the charter form of government proposition on the April ballot.

The actual wording of the petition calls for the formation of a commission to develop and propose a charter for Cape Girardeau.

Basically, a home-rule charter would enable a municipality to write its own laws as long as they do not conflict with state statutes and, according to proponents of the charter government form, would allow greater responsibility and involvement for the citizens in governing the community.

The Chamber of Commerce has gone on record as supporting the charter government concept and formed a task force earlier this year to investigate the advantages and disadvantages of such a government form.

Rush Limbaugh, chairman of that task force, addressed the chamber at today's meeting.

According to Limbaugh, a charter form of government is not a new concept in Cape Girardeau. However, former charters were created by the state government for the city.

Limbaugh reported that a third charter was adopted by the city in 1872, but by 1892 the city's growth made it impractical to keep returning to the Legislature for new charters to accommodate changes in the city.

He pointed to the cities of St. Louis, Kansas City and Springfield as some of the many communities in the state now functioning under the provisions of local charters.

A charter, he said, would give this community a viable means of changing and expanding the local statutes to meet the needs of the community as it changes and expands.

"The City of Cape Girardeau will continue to grow and we, as a city, will have an opportunity to adjust our government whenever we want," he said. "We'll be able to write our own amendments to our own charter."

"Our task force closed its work with a rather solemn session in which everybody asked themselves, 'are you ready to work and are you ready to help?' and everyone of them said they were."