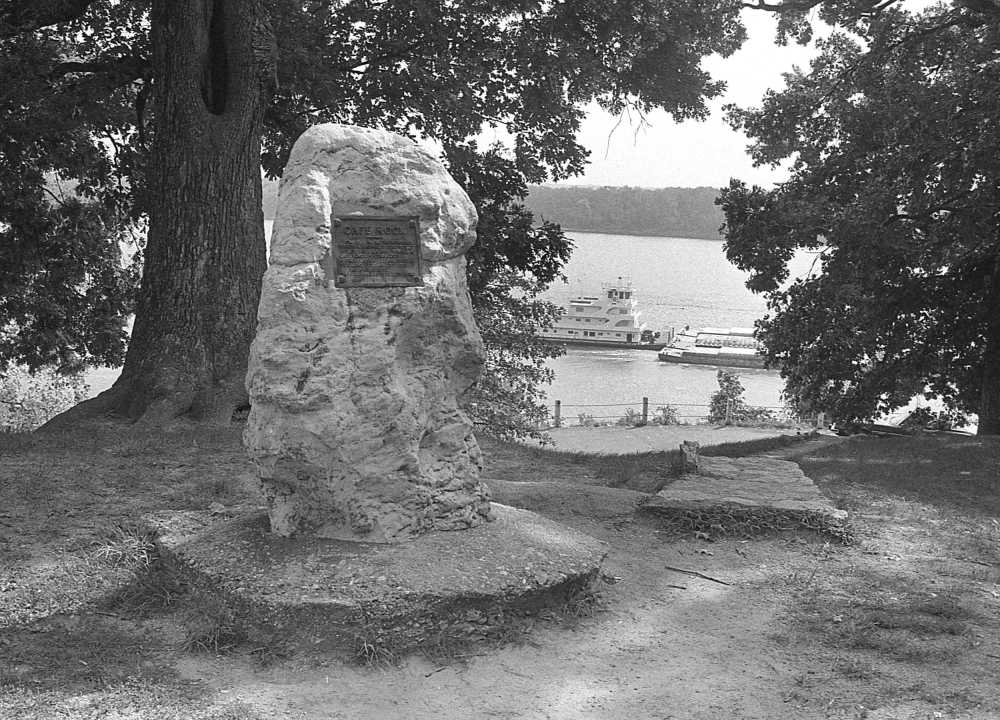 A towboat passes by Cape Rock, one of Cape Girardeau's picturesque and historic spots. Duncan Wilkie, a SEMO State University instructor and archaeologist, and the Cape Girardeau County Historical Society are trying to gather enough evidence to prove the site was a trading post in the 1730s and have the site listed in the National Register of Historic Places. (Fred Lynch photo)

"On this rock promontory, which originally projected into the river and formed a cape, Ensign Girardot, a Frenchman, established a trading post about 1733. From this site Cape Girardeau took its name." -- Inscription on plaque at the Cape Rock site.

That is what Duncan Wilkie, assistant professor of anthropology at SEMO State University and an archaeologist, is trying to find out.

Wilkie is trying to find information to support the inscription on the rock. If he is successful, he will be working with the Cape Girardeau County Historical Society to re-submit the site as a historic landmark.

"Cape Rock was rejected before," Wilkie explained, "and right now I'm in the process of finding out why it was rejected."

He said the site had been submitted before as a historic landmark, but the state Office of Historical Preservation rejected the request to have the site listed in the National Register of Historic Places.

"For one reason or another," Wilkie said, "there was not enough evidence to prove there was a trading post at the Cape Rock site in the 1730s."

Which is where Wilkie comes in. He said the historical society contacted him and asked for his help in proving the authenticity of the site.

His job is to find some kind of indication the inscription is true. "The evidence has to prove there was a trading post there in the 1700s," he said.

That would not be an easy task, Wilkie said. He said a previous study by another archaeologist in the Cape La Croix area provided no documentation of any activity in the area around the early 1700s.

He said the search around Cape Rock would be even more difficult, since railroad tracks have cut away most of the old site. "We will have to look for pieces of ground that have not been greatly disturbed in almost 300 years," he related.

Once he finds possible sites, he said, he can start searching for French or Indian artifacts from around 1700 that would prove the authenticity of Cape Rock. But even if he gets that far, he added, the job would still be "worse than looking for a needle in a haystack."

Which is why Wilkie is searching for more written information to identify the exact location of the trading post and possible proof of its age.

"The more written information for a location," he said, "the better chance of finding traces of proof."

But Wilkie said the current information on location is inexact at best, and they have had little luck in pinpointing the site of the trading post. "They can't find any more written evidence at this point," he said.

So where does that leave the story of Cape Rock?

"That's a good question," Wilke said. "It will be difficult to find out."

Cape Rock has not been listed on the National Register of Historic Places.

Where did the Cape Rock marker come from?

Sharon Sanders tells all about it in her blog: