Solar eclipse over Cape Girardeau in 1984 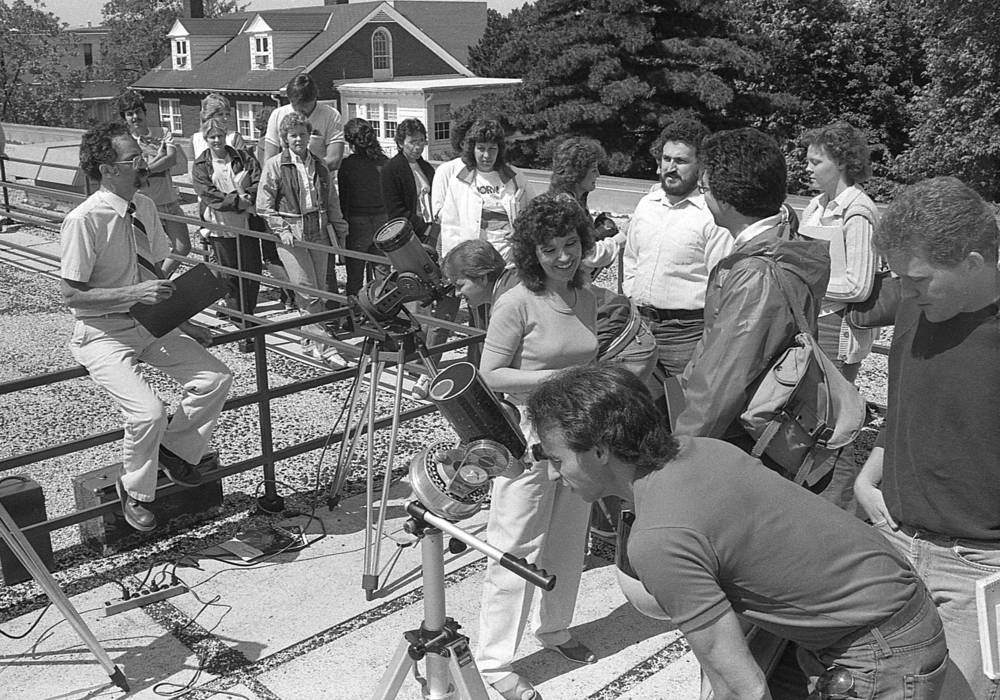 Dr. Leo Connolly of the SEMO State University physics faculty mans an "eclipse station" from a fence on the campus as spectators wait their turn to view the solar event through specially set up telescopes. The eclipse dimmed skies in every state but Alaska today. The peak of the eclipse came here at about 11:20 a.m with about 80 percent of the sun's image covered by the moon. The event is precisely known as an "annular eclipse" because an annulus, or ring of sunlight, will remain when the moon crosses directly in front of the sun. A total to 99.8 percent of the sun was blocked at the peak of the eclipse in the choice viewing spot, Atlanta, Georgia. The photo below of the eclipse here was taken by Missourian photographer Fred Lynch at 11 a.m. through a telescope. 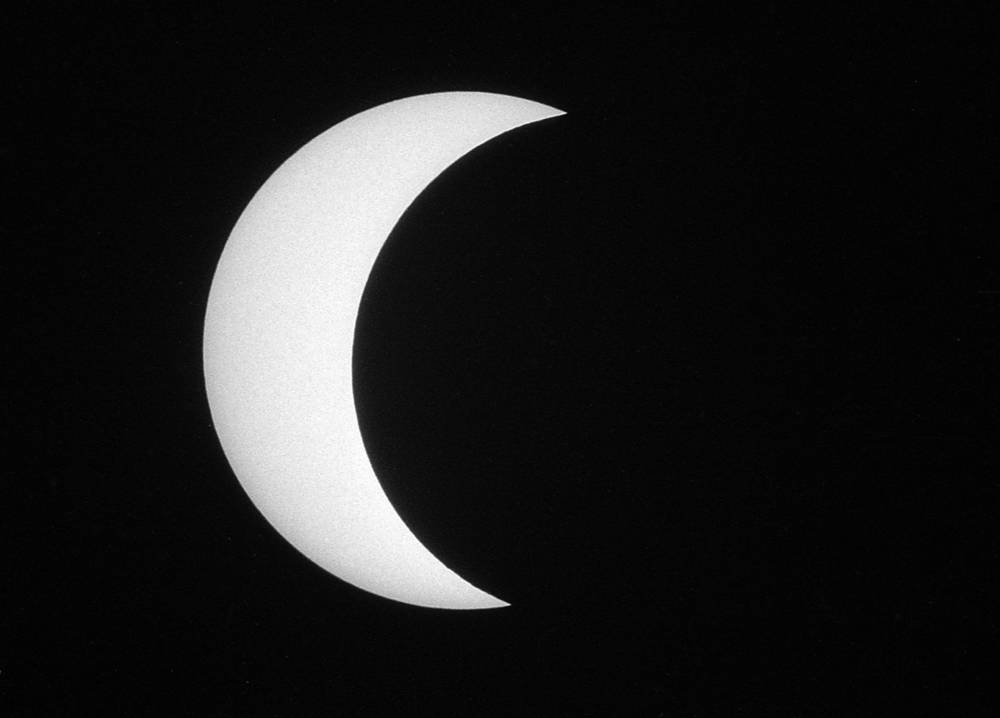 Last solar eclipse of this century

ATLANTA (AP) - Skies began to darken in the Southeast today as the moon blocked the view of the sun in the nation's last major solar eclipse this century, after a damp curtain of clouds broke up and cheered astronomers and moon-struck party-goers.

Telescopes at the University of New Orleans indicated the eclipse began at 11:41 a.m. EDT. About 45 minutes later, residents of Sunshine, La., reported a slight darkening of the sky.

Skies were overcast in Virginia this morning, but Charles Smith, director of the planetarium at the Science Museum of Virginia in Richmond, predicted "considerable darkening" even if the clouds persisted.

Projections called for 99.7 percent of the sun to be blotted out by the moon at the eclipse's peak, leaving only a very thin band of sunlight. The ring is called an annulus, and the event is known as an annular eclipse.

Two other phenomena were expected during the eclipse -- Baily's beads and the shadow band effect.

The shadow band results from the reduced sunlight being distorted by irregularities in the Earth's surface. It produces light in wavy lines, somewhat like the undulating bands of sunlight sometimes visible on the bottom of swimming pools.

Baily's beads -- sometimes called a "diamond necklace in the sky" -- occur in the seconds before the maximum eclipse. Because of their positions in the sky, the moon appears to be slightly smaller than the sun as it moves in front. And because of the mountains and valleys on the moon's surface, the light does not form a true ring but shines between the peaks and gives the appearance of bright beads around the moon.

Much of the interest in today's eclipse was not scientific. Parties, festivals and candlelight luncheons featuring such dishes as "moon beans" were planned across the Southeast.

Curiosity seekers were invited to Atlanta's Piedmont Park to hear "Symphony for the Eclipse," a three-hour, five-minute work composed and performed by a jazz group, This Side Up.

The band painted a giant sign warning, "Don't Look," referring to eye damage that can result from direct viewing of an eclipse.

Dave Hostetter, curator of a planetarium in Lafayette, La., said at least 145 cases of eye damage were reported when an eclipse was visible in that state in 1970.

The cells in the retina of the eye can be burned and permanently damaged when exposed to continuous light from the sun--even when shaded by the moon, scientists say.

To avoid such problems, amateurs were advised to make viewers by punching pinholes in cardboard, aiming the image of the eclipse onto a second piece of cardboard.