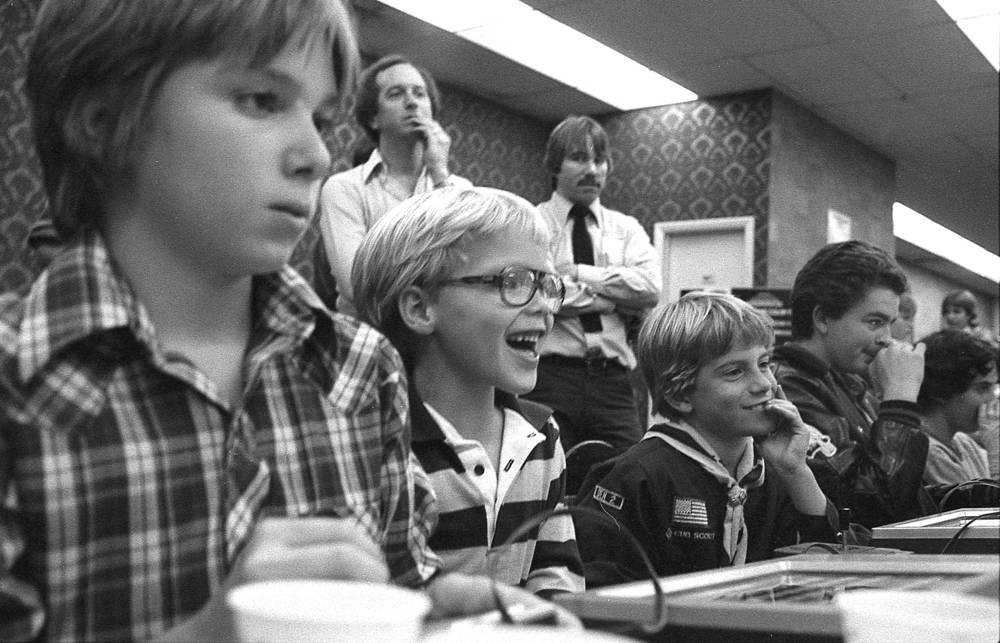 David Kinder, 6, is elated as he scores a touchdown against eventual football champ Jon Rust, left, during the second-ever video games tournament at Shivelbine's in Cape Girardeau. Below, competitors concentrate on their screens as they attempt to knock out their opponents in the quest for the video football and baseball titles. (Fred Lynch photos) 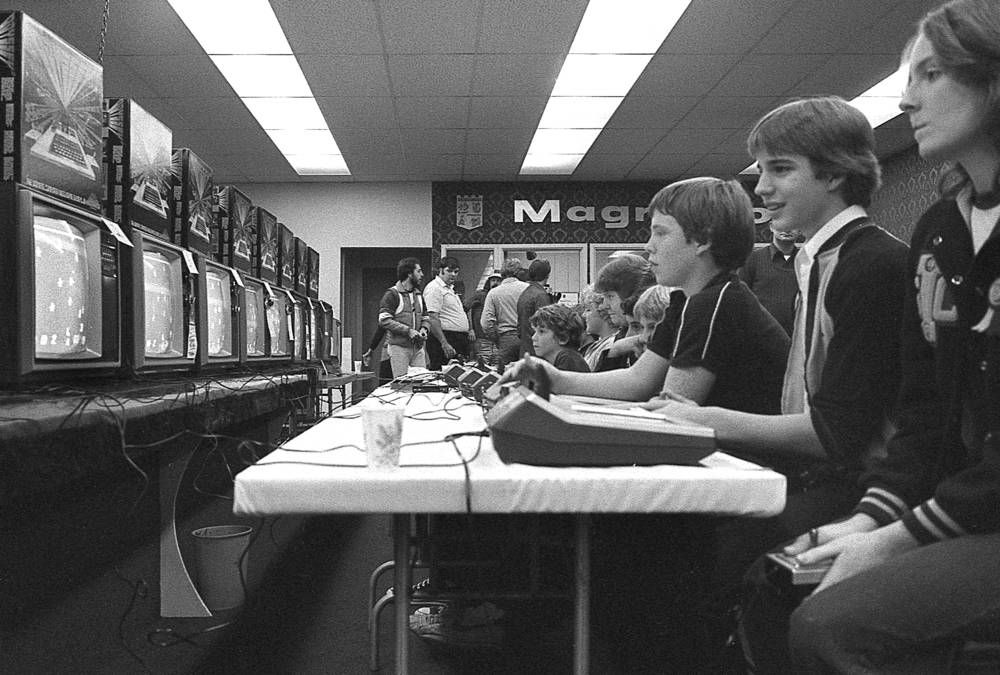 It was the upset story of the evening. Rookie David Kinder had just guided his team past veteran and co-favorite Rex Rust, and he was ecstatic.

"Where's my trophy?" the young football whiz asked, unable to contain his excitement. Kinder had lost his cool for just a moment. He didn't realize that he had won only in semifinal competition and that he had one more game to go before taking the championship trophy home to show the folks back at the neighborhood.

But soon, Kinder regained his composure and waited calmly for the title match.

David was one of about 25 people of varied ages taking part in the second-ever video baseball and football tournament at Shivelbine's music store Tuesday. David is six.

When psyching himself up for the title match, David broke his concentration and took time for a brief interview before taking on Jon Rust of Cape Girardeau in the battle for all the marbles.

"My first game I beat a big guy," the blond-haired, bespectacled youngster stated. "I beat him 60 something to nothin'. I had 60 something and he had nothin'. Then I beat that guy over there."

That guy over there was 11-year-old Rex Rust, brother of finalist Jon and co-favorite with his brother to take the title. Jon was the defending football champion, and the two brothers had practiced for hours in preparation for the tournament.

The semifinal contest between Rex and David was a close affair for the first minute of the two-minute contest. With the score deadlocked at 7-7 and 1:33 remaining, David decided to go for a field goal. It was good and the first-grader had pulled ahead of his older opponent to stay.

Both competitors wore the expression of concentration as the game continued.

But it was the concentration of David that seemed to prevail in this game. He skillfully maneuvered his players from one end of the field to the other with short passes and long running plays.

David was speechless during the game as he tensely stared at the television screen, attempting to anticipate his opponent's next move.

But then the contest was over. David won by a score of 24-10 and the young player could contain his emotions no longer.

"I won," he yelled ecstatically as he jumped out of his chair.

But there was still one more obstacle which could keep this Cinderella story from having a perfect ending. David now had to play defending champion Jon Rust who had crushed his opponents in two previous matches. The six-year-old video football whiz from Cape Girardeau would have to defeat the old pro to complete the success story.

It was not to be. The defending champ quickly jumped out to a 21-0 lead and things looked hopelessly bleak for the rookie. Then, David scored a touchdown to draw within 14 points and a huge smile appeared on David's face.

But Jon's quick hands and "secret" moves proved to be too much for the youngster and the spread began to widen.

"Concentrate David," an onlooker stated as the score hit 42-7. "I am," he replied with just a bit of frustration in his voice. Young Mr. Kinder looked over at his opponent several times during the match maybe in an attempt to read Jon's mind or perhaps to catch an expression of emotion on the champ's face.

But Jon was cool. He uttered not one word during the match and never broke his expression of concentration. His experience was showing.

However, as the clock ticked down to the final seconds, David had rationalized the situation and did not appear mad or frustrated, about his impending loss.

"Oh well, if I lose I'll still get second," he said. And he did. The runnerup smiled for the cameras as he proudly held his second-place trophy following the match.

In the meantime, Jon was discussing the strategy of his victory. "Doing what is unexpected" is the secret, the two-time champion explained.

Jon stated that he and his brother had been practicing on their home video game for about 45 minutes each of the past four days. He said he expected to face his younger brother in the finals.

"I was really surprised when he (Kinder) won," Jon said.

Victory was sweet for both contestants. Each took home a handsome trophy and a cassette which contains the programming for another video game.

The winner of the baseball portion of the contest was Horace Reams, 24, of Scott City.

Reams had to be considered a dark horse going to the final round against 15-year-old Kendall Sierakowski of Lutesville.

The champion said he had lost a piece on the control unit of his game at home and had not competed or practiced for about three months.

However, though he was a little rusty, Reams found the tools to defeat Sierakowski in head-to-head competition.

"I figured second place would be about the best I would do," Reams stated. I missed some fly balls that I shouldn't have. But I still played well enough to win." The final score was 8-2.

Reams competed in the football competition in the first tournament at Shivelbine's in February and was soundly beaten by one of the younger competitors. Therefore, he decided to try his hand at baseball this time around.

The event was sponsored by Shivelbine's and the Magnavox Company, which manufactures the Odyssey games the contestants were using.

Another tournament will be held within the next year and anyone is free to enter the competition.

A video game unit can be purchased for about $180. The cassettes retail at about $20.

Experts suggest that you practice plenty if you plan on entering. It will take a quick mind and a will of steel to defeat the likes of David Kinder and Jon Rust. Besides, a loss to a six-year-old can be humiliating, even if he is a video football whiz.