Water Street - then and now

This view of Water Street is looking north from about 11 N. Water toward the three-story Hobbs Furniture store on left, at the southwest intersection with Themis, then across to old Riverview Hotel (light colored facade) and old Frisco passenger depot in center distance at "end" of tracks. The ferryboat Gladys barely visible in river at right, with Missouri riverboat Morning Star docked. Circa 1914. See more in story below. (Photo courtesy of Robert White of Southeast Missouri State University)

The photo below is a recent view of the area with the Mississippi River Tales mural on the floodwall. The tall building at left is Port Cape Girardeau. 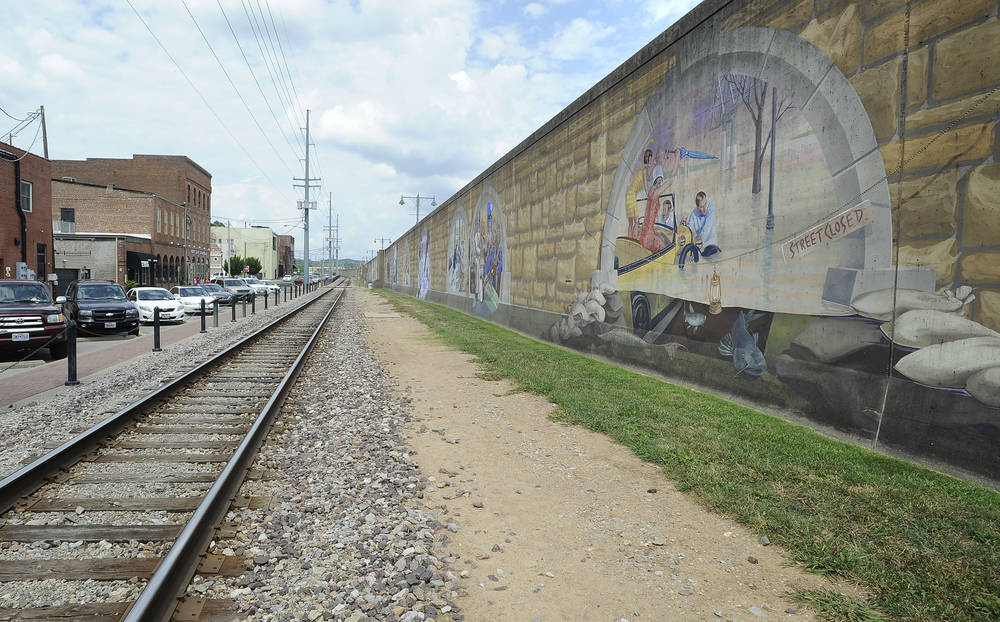 The Mississippi River was the water highway for Cape Girardeau and Southeast Missouri from its first settlement in the 1700s. People today drawn to its muddy edge may have visions of past steamboat days when Water Street was the hub of commercial activity. The mental image is brought to life by the accompanying photo which takes one back to 1914. It is rather a rare photo, for most of those taken of the Water street area were taken from the north looking south, whereas this one gives one a perspective from the south.

Some of the most notable items contained in the picture include from left to right: Hobbs Furniture storeroom, S. Albert Grocery Co., Main Hobbs Furniture Co., Frisco Depot, Gladys Ferry and the steamer Morning Star.

Sebastian Albert was born Aug. 10, 1827, in Lorraine, France. He immigrated to the United States in 1839 and lived in Louisville, Ky. until 1845 when he moved to Jackson, Mo. Sebastian and his brother John were engaged in merchandising there until 1849 when Sebastian was bitten by the gold bug. He made his way to California but returned to Cape Girardeau in 1852 with a great deal of experience but very little gold. Between 1852 and 1857, Albert was engaged in several different occupations, including the liquor business, sawmilling below Cape and serving for a short time as clerk on the steamer Whirlwind.

In 1857, Sebastian Albert and a Mr. Hunt bought Col. Robert Sturdivant's mercantile and commission business located at the northwest corner of Themis and Water streets. Sturdivant, who had migrated to Cape from Virginia in 1835, had entered into the mercantile business with Andrew Gibboney in 1843. A notice from Sturdivant published in the Oct. 29, 1857 issue of the "Cape Girardeau Eagle" stated, "I have sold my stock of groceries to Messrs. Hunt and Albert, who will continue business at the old stand. Messrs. Hunt and Albert are reliable businessmen, and I take pleasure in saying to my old customers and the public generally, that they are eminently worthy of confidence and patronage." The notice was dated May 7, 1857.

In the same publication, an advertisement appeared which stated, "Hunt and Albert, Wholesale and Retail Grocers, Produce and Commission Merchants, Corner of Water and Themis Sts., we now have in store the largest and best selected stock of groceries ever brought to this market." A long list of items on hand followed, which in part included 200 bags prime Rio Coffee, 100 barrels and half barrels molasses, 40 barrels New Orleans sugar, 200 kegs assorted Pittsburgh nails, 100 barrels copper distilled whiskey, 100 dozen cans Baltimore oysters, 75 kegs American rifle powder, 500 bags G.A. salt, indigo, madder (madder was a plant from the root of which a red dye or pigment was extracted) and ginger. All of the above had been brought during the suspension of navigation at slightly reduced prices.

The Hunt-Albert concern during the 19th century was the general supply house for a large section of Missouri, Arkansas and Illinois. Country merchants came from great distances to purchase their goods. In 1862 Hunt died, which led in time to sole ownership by Albert.

By 1891, the Albert operation was the largest business in Cape. The Nov. 28, 1891 issue of the "Cape Democrat" stated that "Judge Albert had more capital invested in the grocery and commission business than any other man doing business on the Mississippi River between St. Louis and Memphis." During much of this same time frame the Albert operation served as agent for several different steamboat companies. During their first year in business, 1857, Hunt and Albert became agents for the Persia, a regular St. Louis-Hickman packet boat. The Persia left Cape for St. Louis every Tuesday at noon and every Sunday for Hickman at 10 a.m.

Most of the material pertaining to the S. Albert business refers to its location at the northwest corner of Themis and Water, where indeed its main operations were centered. However, in the accompanying picture one finds an S. Albert Grocery concern located in the southern portion of the building now occupied by the Port Cape Girardeau Restaurant. It may be that the business had expanded to the point that additional space was required.

The building now occupied by the Port Cape Girardeau Restaurant on the southwest corner of Themis and Water was for most of the 20th century the site of furniture concerns. However, prior to 1900 it was occupied mostly by wholesale and retail grocery operations. In July of 1857, Samuel R. Sloan and John H. Filburn purchased the property and in October of 1858 they opened a mercantile business. An advertisement in the May 26, 1859 issue of the "Cape Girardeau Eagle" listed its location at the corner of Themis and Water. They advertised as commission, forwarding, produce and grocery merchants. They indicated "no fear of honest competition, besides we buy for cash."

In part Filburn and Sloan's stock included bed cords, wooden buckets, wines, sugar, molasses and axes. John Filburn eventually became sole owner of the structure on the corner of Themis. When he died in 1884, followed two years later by his wife, the property passed to his daughter Mary Moore Filburn. It remained in her possession until 1909 when she sold it to Earnest Hobbs. In 1896 Mary Filburn married Capt. Buck Leyhe, who was to become the master of all three steamboats named "Cape Girardeau."

The Hobbs Furniture concern only did business at this location for about five years, partly because of the two devastating fires in the span of four years which placed a strain on Hobbs' financial status. The second fire in 1912 destroyed the interior of the building, about all that remained of the structure built in 1838 was the exterior walls. Hobbs continued to operate the business until his retirement in 1914. In that year W.O. Townsend opened his furniture store which would continue doing business at the location until the 1940s.

The Frisco Depot was located at the foot of Broadway across from the Riverview Hotel. The City Council had received a request to build a depot there on March 31, 1900. The city fathers signed a railroad depot ordinance on April 14, 1900. The Frisco line was completed between St. Louis and Memphis in 1903, but the depot situated on the river bank was periodically a target of floods as were the many business houses located along Water.

It was therefore decided to relocate the depot south of the present Montgomery Ward Building on what is now a parking lot. Before the new depot could be built, considerable fill had to be brought to the site. The first trainload of dirt was unloaded on the levee Oct. 17, 1916, and by Nov. 11, 1916, the dirt train was hauling 1,000 yards of dirt a day. The depot was soon to be abandoned.

The ferry "Gladys," which cost $75,000, was placed in operation between Cape and the Illinois shore on Feb. 10, 1911. Besides carrying numerous passengers between the two points, she transported southern produce to Cape, much of which was transhipped to St. Louis. During floods, the "Gladys" was pressed into emergency service as a rescue vessel. During the flood of 1927 one eyewitness stated that he watched as the "Gladys" snatched people from the tops of houses and trees on the Illinois side of the river. With completion of the bridge in 1928, the service of a true friend was terminated.

Those steamers christened "Morning Star" perhaps had more than their share of bad luck. The original "Morning Star," a sternwheeler, was built at Booneville, Mo. In 1877, she struck a snag four miles below Jefferson City on Feb. 23, 1880 and sank. The "Star" was raised and repaired but was sunk by ice while lying in winter quarters at Jefferson City on Feb. 5, 1881, and became a total loss. The "Morning Star" in the accompanying photo was also a Missouri steamer serving the area between St. Louis and St. Joseph. She is docked at the Cape Water street front. She may have been going to or from winter quarters or on an excursion. This ship was constructed in 1907 and was sunk by ice like so many others during the frigid winter of 1918.

Cape Girardeau's river front has a rich past heritage which has had considerable impact upon the growth and prosperity of the region. It is a heritage well worth preserving and promoting in the proper way. Those proprietors of the Port Cape Girardeau Restaurant and the most recent Madder Rose are to be commended for their preservation efforts. Sections of both the Madder Rose and Port Cape Girardeau were at one time used as boat stores.