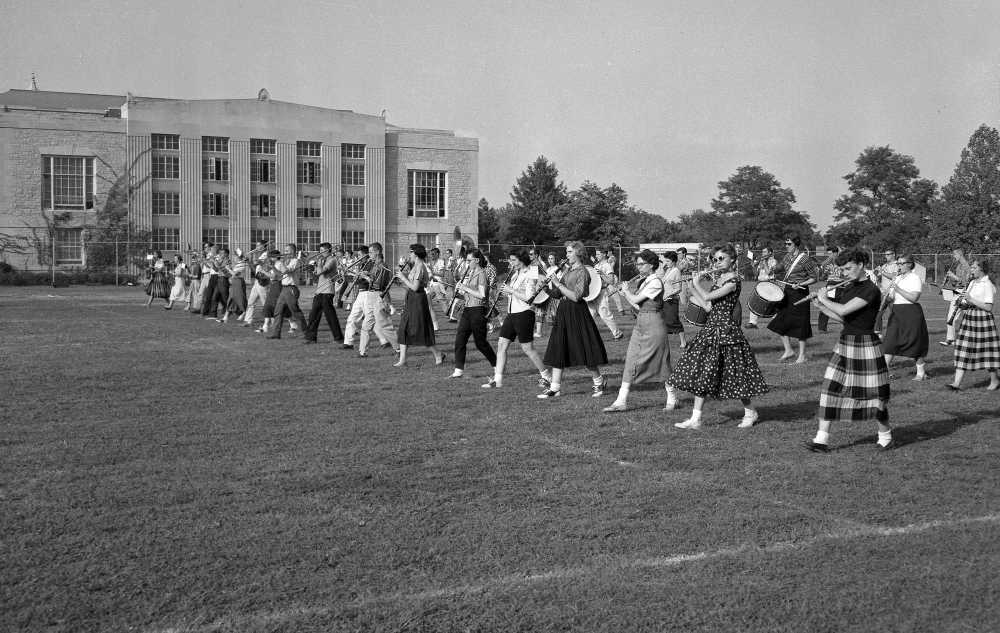 The Golden Eagles Marching Band of Southeast Missouri State College practices on the field behind Kent Library in this undated, possibly late-1950s photo by G.D. Fronabarger. The library was later expanded and the field became a parking lot.

Had America's first rocket, the Vanguard, not fizzled on the launching pad, State College might have had that as the name of its Golden Eagles band.

This story and others were told Tuesday night at the annual Golden Eagles band dinner at Memorial Hall honoring LeRoy Mason, the director, for his 10 years as head of the organization.

Dr. Mark F. Scully, college president, recalled his association with Mr. Mason, first as principal of the high school at Jackson when the band leader was a faculty member there. He then brought him to the college, where Mr. Mason now heads the music department.

"I learned early to respect him and to appreciate him because he did his job to the best of his ability at all times," Dr. Scully said. "He was aggressive. He got things done."

Mr. Mason recalled the early days of the band. He said the name was selected from a large number submitted, one of which was "The Vanguards." This was brought on by the pending rocket launch, but was shot down when the nation's first rocket failed.

However, Golden Eagles also was among the suggestions, and it was finally chosen. There immediately came queries from students and townspeople as to how this name fit in with identification of college athletics with Indians.

Mr. Mason said he directed a student, Jim Rhodes, to do some research at the library and shortly the latter came back declaring, "I've found it, Mr. Mason!"

His research disclosed that the Golden Eagle was the war bird of the plains Indians, Mr. Mason said.

The first band was originally composed of 60 members and they practiced on the field behind Kent Library, now covered by expansion of the library.

There was one bass drum, no snares and no cymbals, Mr. Mason recalled. He said after a few days of practice a girl student came to him and said she didn't play the snare drum well, but thought her effort would be better than none.

He agreed and she was accepted. Similar observations by two other students brought them as volunteers, so the band finally had a snare drum section. It ended up with 65 members that first fall and played in white shirts and dark trousers.

The band director noted that band size had required the winter concert band be divided into two different bands, blue and gold. "There is just one Golden Eagle band," Mr. Mason emphasized, adding that it marches in the fall and plays concerts in the winter, and exists throughout the year.

The first award for best marching was presented to Terry Goodson of Potosi. Gifts were presented Mr. Mason and David Green, assistant band director. Roger Rideout of Poplar Bluff, band president, presided. Movies were shown of the Golden Eagles at half time of professional football contests in St. Louis and Kansas City.