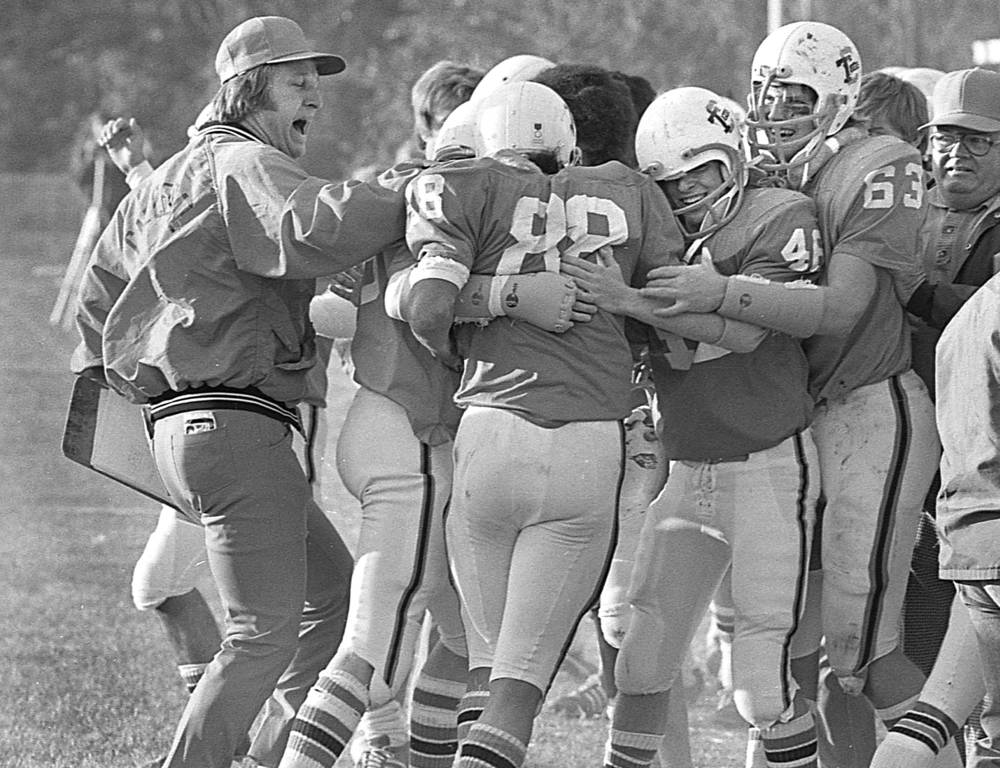 Cape Central Coach Ryland ("Dutch") Meyr portrays the jubilation of his players and most of the fans in attendance Sunday at Houck Stadium after Ronnie Rencher (88) caught a 10-yard pass from Andy Limbaugh with 16 seconds to play, giving the Tigers a 20-17 victory over Ladue in their 4A state playoff game. Mike Gibson (46) and Ted Osburn (63) are happy, too. Below, Meyr continues with the celebration. (Fred Lynch photos) 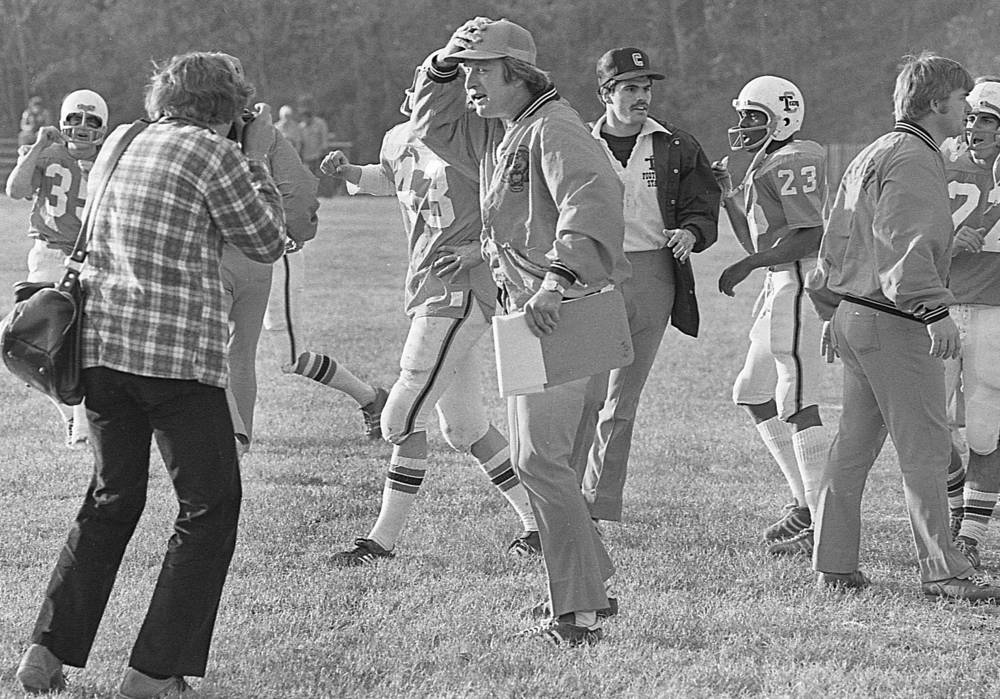 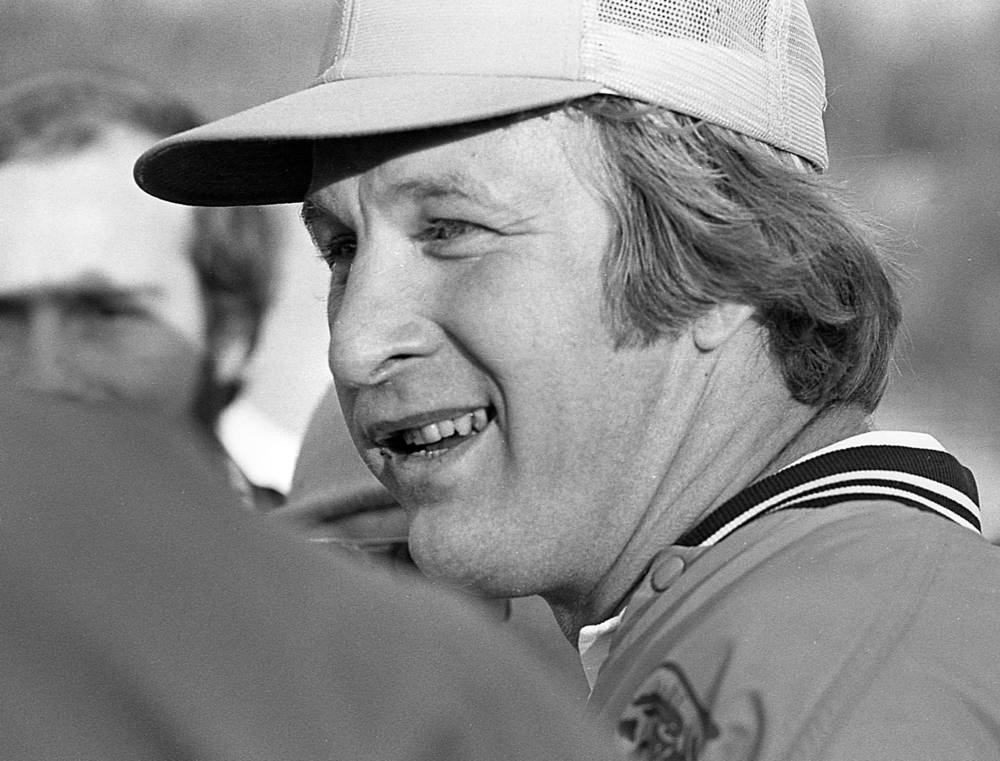 A week later, the magic ended for the Cape Central football team.

"I blew it," game official Ray Cliffe said. "I have no alibi. The kid did such a great acting job. I presumed it was an incomplete pass."

The play in question was a play that probably will never be forgotten by Cape Central coaches, players, fans... a play, while not directly costing Cape Central a chance at the Missouri Class 4A state title, prevented the Tigers a likely touchdown and maybe taking insurmountable momentum entering halftime.

The score stood 0-0 and the Tigers had the football on their own 24-yard line. Quarterback Andy Limbaugh stepped away from center and flipped a bouncing pass BACK to Ronnie Rencher. Rencher feigned disgust that the pass was "incomplete." But it wasn't.

Limbaugh's pass was a lateral which supposedly meant the play was not over. All of a sudden, Rencher raised his right arm and heaved a perfect spiraling pass to William Dixon at Hazelwood Central's 40-yard line. Dixon had clear field ahead of him for an apparent touchdown.

Wait a minute! One plain problem occurred--official Cliffe blew the whistle to stop play after Limbaugh's pass bounced to Rencher. At that point he didn't realize the pass was a lateral.

"I thought it was an incomplete screen (pass)," Cliffe said. "The kid (Rencher) put on such an act. He faked me into it. He just did such a great acting job.

"You live with the whistle. I have no alibi."

Meyr, however, was particularly incensed about the fact he notified the officials prior to the game he might use that pass play--a common procedure by coaches when a trick play might be in the offing.

"It was probably the best executed pass play we've had all year," Meyr said. "Rencher must have done a phenomenal job of acting on the play--maybe too good as it turned out. But everything went perfect on it.

"The official just blew it. Ray Cliffe is a veteran official who I have worked with in the past. It just snuck up on him."

Meyr gritted his teeth, holding back the anger.

"That type of pass play would have had us so high that if we would have gotten that 14-0 lead, there would have been no way they could have beaten us. But there's no use crying about it."

But tears did flow from the eyes of disheartened Tiger players, coaches and fans. Their second-straight miracle bid ended on the Hazelwood five-yard line as they dropped an extremely hard-fought 13-7 decision to Hazelwood Central.

"It finally had to come to an end," Meyr said. "But I've never been as proud of such young men as these in my 16 years of coaching. They're the greatest bunch of kids I've seen in my life. It tears me up they had to lose that way."

Yes, the Tigers finally ran out of miracles. The lateral pass play was stopped by an official and the Tigers' last-minute charge was halted by the Hazelwood Central defense.

After winning against Ladue 20-17 in the final 16 seconds a week ago, the Tigers appeared to be on the verge of the same heart-stopping antics Saturday. Central appeared beaten on Hazelwood Central's 35-yard line with less than two minutes left in the game. All the Hawks had to do was run out the clock. But on the first play, quarterback Don Kasperski fumbled the ball and Andy Rickard recovered giving Central one final chance, the same second chance Ladue gave the Tigers last week.

With the clock ticking under a minute, Limbaugh hit Cliff Palmer with a third-down pass at the 20, giving Central a first down.

With less than 40 seconds remaining as the clock ran, Limbaugh tried to hit Cliff Palmer over the middle but the ball was overthrown and intercepted by Hazelwood defender Mark Stephens at the five.

Meyr played football at Southeast. He started four years at tackle and won Little All-America honors in 1961. He played on three MIAA championship teams. As an assistant coach from 1969-1977, Meyr was part of five MIAA championships. He was a member of the track team in 1962, where he ran relays and competed in the discus.