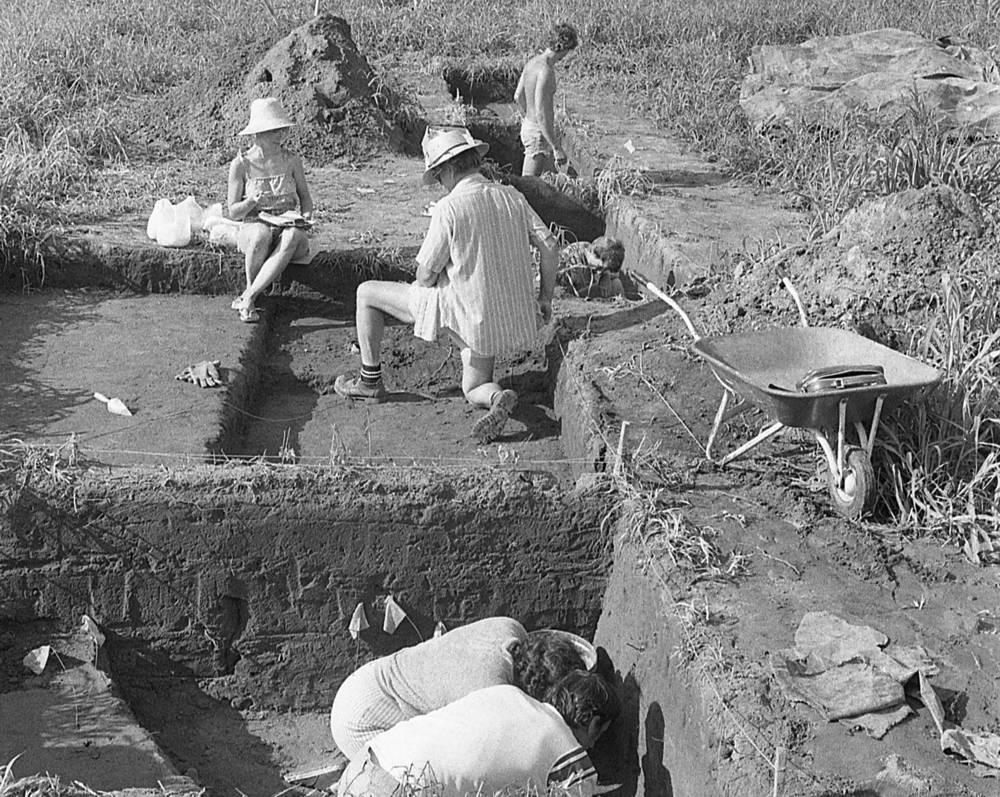 Above, archaeology students work in individual pits unearthing various artifacts from a civilization that vanished hundreds of years ago. Below, Homer Hulsey, foreground, and Sara Hughes carefully dig away dirt from around the fragile skull of an infant at a prehistoric archaeological site on the south side of Cape Girardeau. 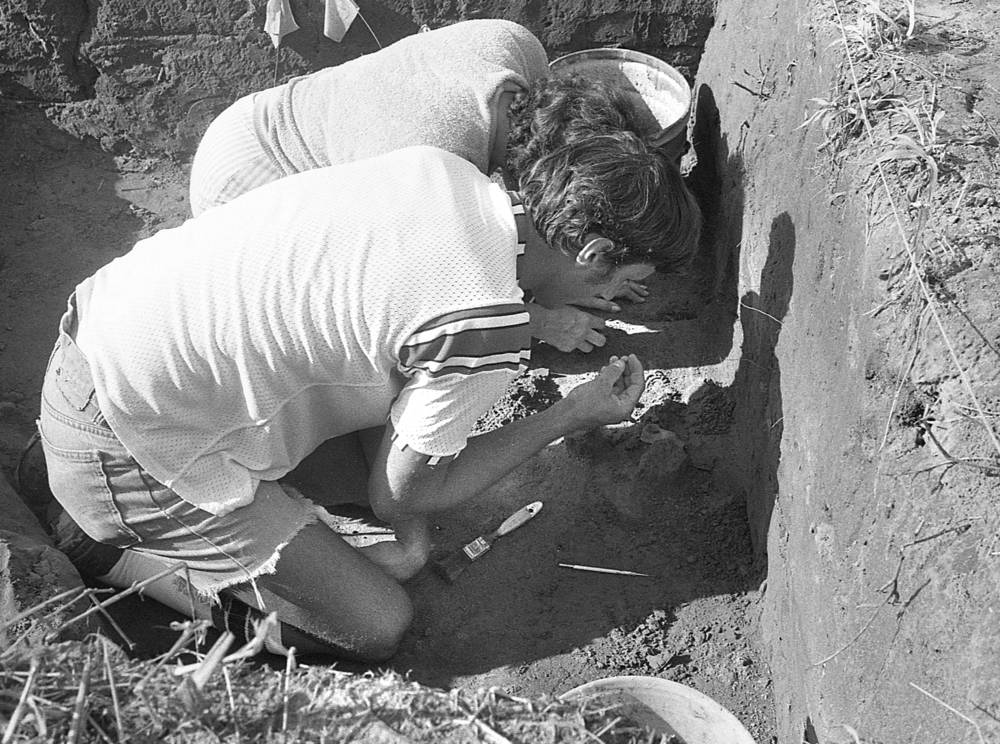 The remains of two infants were unearthed earlier this week in a field just east of the Florsheim Shoe Co. in Cape Girardeau.

Police have no suspects and do not intend to investigate the case.

You see, the babies died and were buried more than 700 years ago during the "prehistoric" era of Cape Girardeau and are two of 10 human bodies discovered in the past five years by SEMO State University archaeology students.

The site, according to Dr. Duncan Wilkie, instructor in the archaeology fieldwork class, is one of the most important "digs" in Southeast Missouri.

"This site is the key to understanding the history of this Cape Girardeau area," he said as he and the 10 students in the class sifted through mounds of dirt hunting for traces of a vanished civilization.

Wilkie, who has been on the SEMO State faculty since 1976, wants to have the five-acre dig site placed on the National Register of Historic Places in order to preserve its historic worth.

Three tracts of land make up the dig site and Wilkie is attempting to obtain permission from the three owners of the tracts to have the site nominated for the national register. The tract being excavated this summer belongs to Mrs. R.C. Evans, a granddaughter of Louis Houck.

If it is accepted on the national register, it will become only the second location in Cape Girardeau to be so designated. The other is the Glenn House.

Excavation at the site takes place only during the summer. In fact, the individual digs at the site will be filled in the next week until next summer.

But work does not end just because digging stops. Wilkie explained that during the fall and spring semesters at the university, the artifacts found at the site are analyzed and catalogued in an attempt to piece together information about the people who lived here around 1200 and 1300 A.D.

"For every hour we're out here we spend four or five in the laboratory," he noted.

Each of the hundreds of artifacts, including pieces of jewelry, pottery and bones, is logged listing the exact location of the artifact, when it was discovered and the depth at which it was located.

By analyzing the dirt and location of the artifacts, Wilkie said it has been determined that there were rows of "houses" in the small settlement of the Mississippian culture Indians, an agricultural people who cultivated maize and beans.

So far, two homes have been verified and a third is being mapped out. "I would say there are probably about 20 houses here," Wilkie said, noting that this was a relatively small settlement. He said that an archaeological site near Poplar Bluff had 94 houses.

The two houses discovered so far were between 15 and 20 feet wide separated by a 10-foot alley. "We think there are at least three rows of houses here," the instructor said as he pointed toward the ground.

The remains of the two infants found on Monday and Tuesday of this week (two of seven infants discovered since the excavation began several years ago) were inside the boundaries of the homes. Wilkie explained that when infants died during the Mississippian culture era they were often buried in the corner of the homes.

"Infant mortality rates at that time were very high," explained Nancy Haertling, one of the students in the class, "so high that they didn't even name their babies until they were three years old."

The three other bodies, one of a child of about six years of age and two adults, were found in what appears to be a burial site east of the village.

Wilkie is very enthusiastic about the dig site, and especially about its location. "This is incredible to have a site five minutes from the university," he said. "I've worked at universities where we had to drive four hours to sites and they weren't half as good as this."

And there are plenty of sites in this area to explore. "This is one of about 48 sites of prehistoric culture that we know of in Cape County," said Wilkie who noted that areas to the south of us are even richer in potential dig sites. "There are more than 1,000 in Scott County."

As for the students in the class, they range from archaeology majors to high school teachers who found a different way to spend six weeks of their summer.

"We advertise this course as the best way to get a tan and dirty fingernails," Wilkie quipped.

"I like history," explained Mrs. LaDonna Conn, "and this is a good way to get into the nitty-gritty of it."

Digging at the site will go on for years because the excavations so far have hardly scratched the surface, Wilkie said.

As more is discovered at the site, more is learned about the history of the region before the white man came to the land.

As one watches the excavating progress and the pieces of the long-gone civilization are unearthed, one wonders how an archaeologist will view our culture thousands of years from now.

Imagine the endless discoveries when a futuristic archaeologist comes upon a sanitary landfill.