Folk singer Jeannie Hinck: 'The Battle of the Beans' 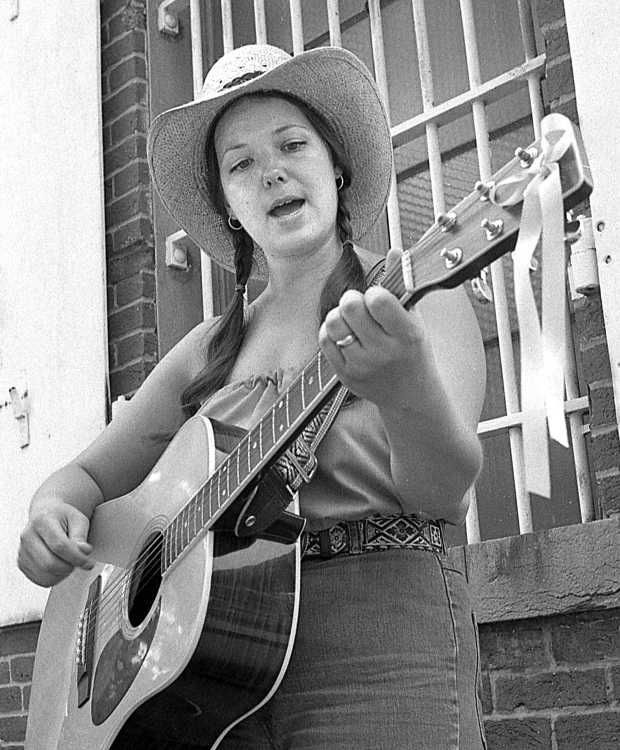 Jeannie Hinck, local folk-song writer, sings her recent recording, "Political Prisoner," in front of the bars of Common Pleas Courthouse in Cape Girardeau. The well-known yellow ribbon on her guitar symbolizes support for farmer Wayne Cryts. On the flip side of the record is "The Wayne Cryts Song," with a subtitle, "The Battle of the Beans." [The song can be found on YouTube.] (Fred Lynch photo)

American heroes seem to be few and far between these days, but Jeannie Hinck is so convinced she has found one, that she has written a song about him.

Mrs. Hinck, a folk-song writer, who grew up in Cape Girardeau and lives near Jackson, released a record this week which champions the Wayne Cryts case.

The "Wayne Cryts Song," with subtitle, "The Battle of the Beans," was begun soon after news hit the streets that Cryts took 33,000 bushels of soybeans he said were his from an elevator at Bernie, and was going to be arrested. The flip side of the record, "Political Prisoner," touches on the life of "any prisoner anywhere," Mrs. Hinck stressed, and what he and his wife go through while he waits in jail.

"They call him political prisoner for reasons not quite understood.

They await for the storm to pass over, but waiting will do them no good.

For the wind will carry his story to the free wherever they stand.

And the storm shall gather its story as thunderstorms voice over the land."

Mrs. Hinck wrote the first song because she felt so strongly about what had happened. "It seemed totally unconstitutional to me," Mrs. Hinck said. "I felt the law had been set up in favor of the few who have money, and money has power."

The fact that the case is so controversial does not bother Mrs. Hinck at all, she said.

"My better songs have been written when I feel controversial. I think he (Cryts) is just trying to take care of himself, his family and his possessions.

"Railroaders have their John Henry and Casey Jones, the lumbermen have Paul Bunyon, the coal miners have Big John, but there has never been any song written about an American farmer hero, and they are important. They sustain our lives with the food they grow. In my opinion, Wayne Cryts filled the bill for a farmer's hero," Mrs. Hinck said.

A visit to the Russellville, Arkansas jail, where Cryts was held by Judge Charles Baker, allowed Mrs. Hinck to sing her song to Cryts. The song was piped through the jail for everyone to hear. Mrs. Hinck also recently made an appearance at the Puxico Picnic fundraiser for Cryts. Her record was released this week to local radio stations.

"I wasn't sure Mr. Cryts would want me to sing my song to him, or that he even wanted a song written about him, but after he heard it, he said he was really pleased and happy that I had done it," Mrs. Hinck said.

The song will be sung during Riverfest activities by Mrs. Hinck, and she hopes the records will be available for sale then, she said. A longtime Cape Girardeau musician, Fred Horrell, owner of Capetown Records, recorded it and is publisher.

Proceeds from the sales of the record will go to the Wayne Cryts Defense Fund, Mrs. Hinck said.

This is not the first time Mrs. Hinck has donated proceeds from her songs to a cause she believes in. An earlier song entitled, "Trail of Tears," carries a statement in the copyright that the entire work is a gift from the author to the Cherokee Nation of Tahlequa, Oklahoma.

"Friends shall rally his freedom, gathering strength and support.

They faithfully tie yellow ribbons and symbols of similar sort.

At night the wind will whisper of a man who was taken today.

We cry for his personal freedom, lest ours be taken away."

Her husband, Bill, has given her support throughout her writing and especially for the recent recordings, she said.

"I don't really mind when people disagree with me. They have a right to their opinions too. If I have a strong opinion about something," Mrs. Hinck said, "I want the freedom to voice it.

"If it does some good--that's all I care about."

Read about Wayne Cryts in this previous blog: