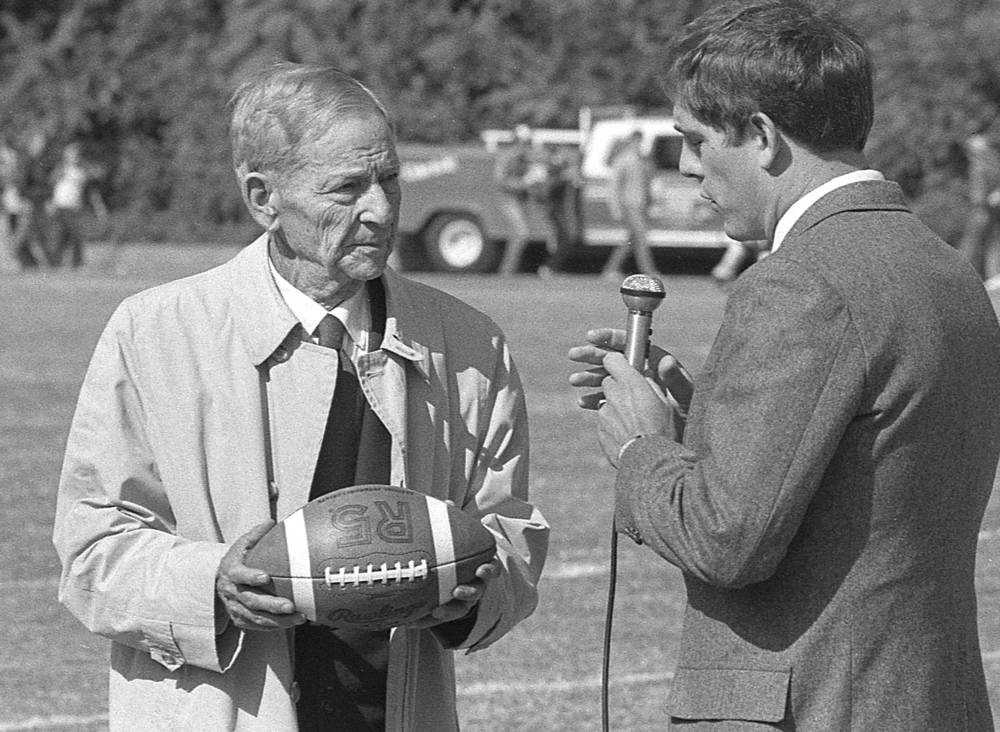 Abe Stuber, left, coach of the 1937 SEMO State University football team which went undefeated and gave up only 12 points during the course of the season, is presented a football by Mike Richie, representing the SEMO State Alumni Council in a pre-game ceremony Saturday honoring the former coach and his team. In photo below, Stuber speaks to the crowd. (Fred Lynch photos) 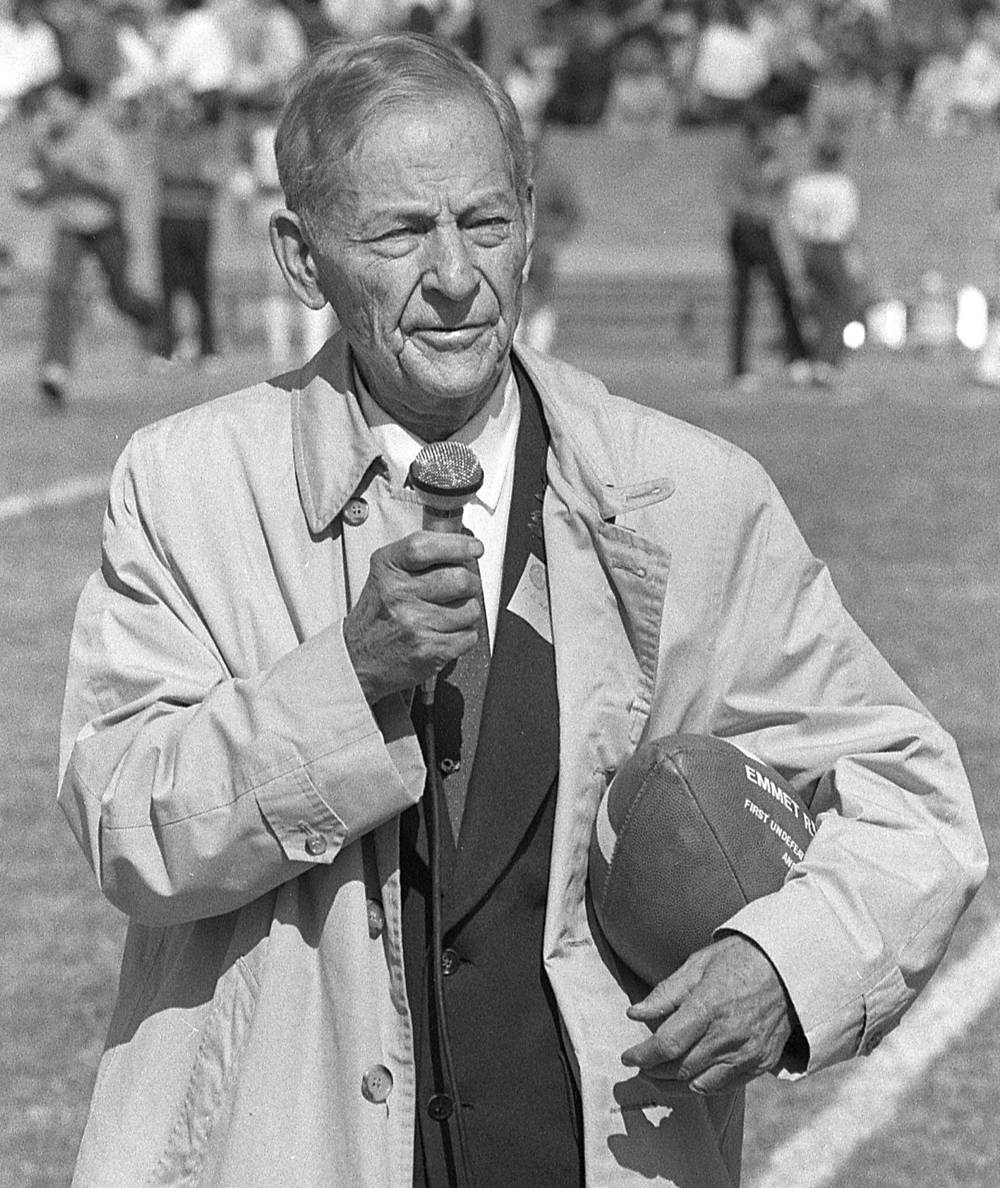 CAPE GIRARDEAU - Emmett R. "Abe" Stuber, one of the most successful coaches in the history of Southeast Missouri State University athletics, died early this morning at his home in Cape Girardeau. He was 86.

During his tenure at Southeast from 1932-46, Stuber's teams won 17 Missouri Intercollegiate Athletic Association titles in football, track and basketball. He captured more championships than anyone in the school's history.

In the fall of 1986, the Board of Regents named the university's track complex in his honor.

In 1974, Stuber was inducted into the Missouri Sports Hall of Fame after retiring as director of player personnel for the St. Louis Football Cardinals.

Funeral arrangements were pending this morning with Ford and Sons Funeral Home in charge.

Former Southeast Athletic Director Marvin Rosengarten said today that there is "no question about it. He was one of the all-time great coaches here."

Rosengarten said Stuber was a coach who remained loved by his players through the years.

"We started an Abe Stuber endowment fund here a few years ago and so many people got involved. It shows me the love they had for him," observed Rosengarten.

"I could see the love of the players who played for him more than anything else."

Rosengarten noted that Stuber still came to every track meet and was a good booster for Southeast athletics. "You could really count on him and that showed me he was that way as a coach," Rosengarten said.

Stuber's coaching career spanned 50 years, beginning in the steel mill town of Middletown, Ohio, in the 1920s and ending in the professional ranks.

From Southeast, Stuber went on to coach at Iowa State, the University of Washington, and at the professional level as an assistant with the Philadelphia Eagles, Green Bay Packers, and Chicago Cardinals.

When the Cardinals moved to St. Louis in 1960, he came with them as director of player personnel and held that post until 1973. He remained affiliated with the Big Red eight more years as a "super scout."

One of Stuber's most notable achievements with the Cardinals was convincing the team to draft Larry Wilson. Though not considered a top prospect in the draft, Stuber said there "was a lot of tiger" in Wilson. He went on to become an All-Pro Safety for the Cardinals and is in the Pro Football Hall of Fame.

As track coach here in 1935, Stuber directed the Indians to their first MIAA title ever during the outdoor season. He followed that with seven straight outdoor conference titles to go along with five indoor titles.

A native of St. Joseph, Stuber played quarterback at the University of Missouri in 1924, 1925, and 1926 and also participated in basketball and track for the Tigers.

Stuber was grand marshal of the 1986 Homecoming Parade, the day the Southeast track complex was dedicated in his name.

In learning that the regents had decided to name the complex in his honor, Stuber was quick to single out the athletes as the key to his success.

"I feel extremely honored," Stuber said at the time. "I have to give credit to the athletes that played for me. They were responsible for all the success we had."