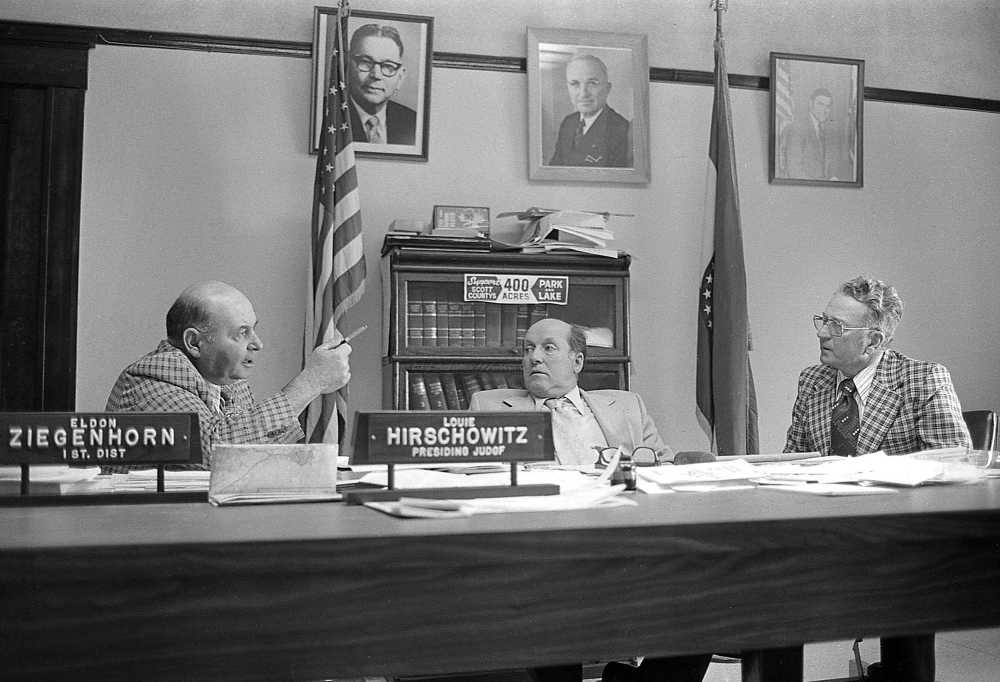 Some people claim, tongue in cheek, that the Pentagon in Washington has five sides--on every issue. The same could almost be said about the Scott County Court at Benton, Missouri, except in this case there are only three, representing the men involved.

Each man holds strong convictions and is quick to voice his opinion. For a first-time observer of these men in action, one might feel they are angry. They are not. The issue may be quite serious but the men involved--and those who know the distictly different personalities on the court--understand that this is the way the judges prefer to do business.

Eyes sparkling, the three men who are charged with governing the affairs of Scott County are as apt to jump into seemingly heated debate over whether to order egg salad sandwiches or go out for lunch, as on the county's budget.

Presiding Judge Louie Hirschowitz of Oran is a self-styled "horse trader" who loves nothing better than to be able to dicker and bargain. He believes, and puts into practice, the theory that what is considered "junk, or worthless to some, is valuable to others, and can be acquired for practically nothing. You can make a lot of money that way," he says.

Flamboyant and intellectually quick, Judge Hirschowitz pretty much runs whatever show he is involved in, although he denies it.

Judge Eldon Ziegenhorn of Sikeston, Missouri is the businessman of the court, having many years experience as a realtor and land developer.

His role is that of the "moderate," and as such provides a valuable balance to the court's decisions.

Judge Melvin Glueck is a north Scott County farmer. Conservative and quiet, he doesn't say much until he has all of the facts concerning whatever issue the court is debating. Once his decision is made and his opinion voiced, Judges Hirschowitz and Ziegenhorn are hard-pressed to change Mr. Glueck's mind.

This is not to say that Mr. Hirschowitz and Mr. Ziegenhorn are in agreement on many issues before the court, because they are not. Each has his own idea or a solution, and those ideas are expressed openly and strongly. But this "adversary" approach is what gives the Scott County Court its own style. It's part of a necessary routine for three men with widely different philosophies, business backgrounds and personalities.

A case in point is their present attempt to decide how to build a new Magistrate Court building for the county.

The problem is this: The county has $429,000 in federal money to be used to renovate the county courthouse, build a storage shed and other facilities for the county road equipment, and to build the new court building on property across the street to the west of the courthouse. Located on the property is an old brick two-story building.

Judge Hirschowitz is a preservationist, and argues that the old building must stay and undergo renovation.

"That's my thought and you can't change my opinion. If it's torn down, I don't want to be here when it happens. We have to pay heritage to our past and tribute in the future and I hate to see old buildings destroyed," he states.

Judge Ziegenhorn counters, "Now, if you're finished, I'll talk a minute. I don't like putting it in the back. What you say may be so, but we have to look to the future, and the only way we can do that is to bulldoze it down and get rid of it. We'll have to do it sooner or later anyway, and it would be better to do it now. We'd best tear it down, and build the new building up front where we can see it."

Now it's Judge Glueck's turn. "The last thing I want is to see the building built in the back of the lot. What I would like for us to do is to build a two-story court building next to and around the old house. We should restore it for use now, and if somebody wants to tear it down after we're gone, then they can."

The arguments are strong, oftentimes quick and occasionally loud. Not only on this issue, but on almost any matter which finds its way to their court for decision.

One matter on which there is complete unanimity, however, is that by working this way, their decisions are stronger.

As Judge Hirschowitz said, "We know we are not mad at anybody. We have the greatest respect for one another, and if we are going to make the best decisions we can for the county, we have to do it this way. The adversary system is the best system there is."

Observers can easily see the friendship between these men, even in the midst of what could quality as "great debate."

When the Scott County Court finally votes on where on the property to locate the new Magistrate Court building and how it should be constructed, it is expected to be a 2 to 1 decision. Most votes by the court are. And it will probably be decided that the old two-story brick building will go, with the new Magistrate Building being one story as opposed to two.

Judge Hirschowitz probably will cast the negative vote. Or, perhaps even abstain.

"Sure, I will have lost the vote, but I haven't really lost anything," he says. "We will have made what we feel is the best decision for the benefit of the county, and that's what counts."