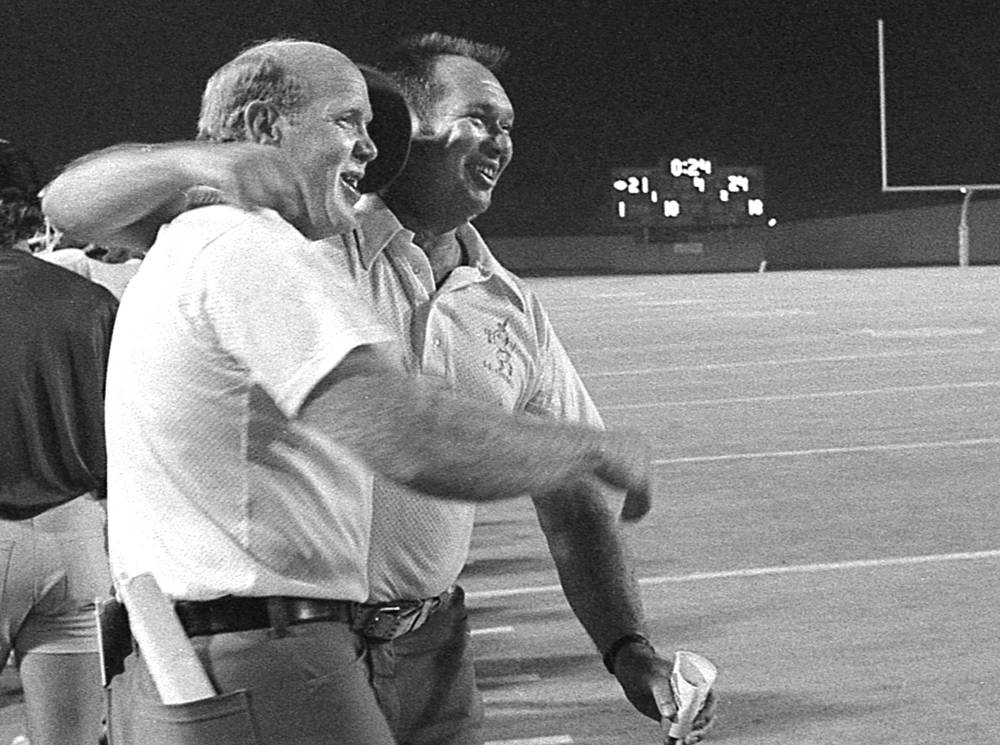 SEMO State head coach Jim Lohr, right, hugs offensive coordinator Dennis Parker near the end of the Indians' 24-21 victory over Murray State Saturday night, Sept. 2, 1978, at Murray, Ky. The win was Lohr's first over Murray State and the Indians' first over the Racers since 1929. Lohr attributed the season-opening win to his team's superior physical conditioning, backed by a number of outstanding individual plays. "The biggest single factor in the game," Lohr said, "was what our kids had done on their own over the summer." See more photos below story. (Fred Lynch photo)

MURRAY, Ky. - On a warm late summer night in Murray, Ky., "Missouri Night" it was. The SEMO State Indians accomplished what they had been unable to do since 1929. They beat Murray State.

With a combination of just plain fight and inspired play selection, the Indians recoiled from a 21-14 deficit to score 10 points in the final 30 minutes while holding the Racers scoreless for a 24-21 victory in the season-opening game for both teams.

After a back-and-forth fourth period, the Indians narrowed the margin to 21-17 when freshman kicker Ed Hotz booted the first field goal of his collegiate career, a 47-yarder with 1:23 left to go in the quarter.

But the crucial offensive play of the game occurred on their next possession, after sophomore quarterback Doug Beard had passed incomplete and lost two yards on a keeper to his own 37. Beard then pitched left to senior fullback Mike Wieser, who lofted the ball to flanker David Gross all alone near the left sideline. Gross went out of bounds at the Murray 11, a 52-yard pass that turned the momentum irreversibly in SEMO State's favor.

Beard, who totaled 48 yards rushing and 75 yards passing in his first college start, took the ball down to the three and then to the one for a first down. Fittingly, Wieser bulled across for the score with 10:24 left to go in the game. Larry Basta's kick gave the Indians their 24-21 advantage.

Then the defense, which had been vulnerable to the Murray State running game early in the contest, took over and shut down everything the Racers tried. Veterans Willie Taylor, who stopped a Murray second-half drive with a saving sack of quarterback Mike Dickens, and Alex Clinton led the way. Taylor finished the game with eight individual tackles and Clinton had seven.

A pair of long punts by Hotz late in the game helped keep the Racers pinned back in their own territory and the defense did the rest. Murray's last good opportunity to turn it around vanished when defense's Rich Schmidt recovered a fumble at the Murray 42 with 2:52 left in the game.

The Indians had to give the ball up again, but freshman quarterback Ricky Ray, who had replaced the shaken up Dickens, watched four passes go astray as the Indian bench chanted: Defense! Defense! The offense then came on to run out the clock.

The Racers, who were hurt badly by 132 yards in penalties, completed only two of 17 pass attempts against SEMO State.

Big breaks and big runs had a hand in all of the first-half scoring, starting with a 42-yard ramble by East Prairie fullback Danny Lee Johnson on the game's second play from scrimmage. The steel-sprung Johnson rolled to the SEMO 13 before Kent Davis pushed him out of bounds. Murray worked the ball down to the two-yard line, and quarterback Dickens sneaked over from there with scarcely two minutes gone off the clock. Freshman kicker Denny Elbert converted for a quick 7-0 Murray State lead.

SEMO State's outlook immediately went from bad to worse when Bill White fumbled the ensuing kickoff, giving Murray the ball at the SEMO 37. But the Indian defense, spurred by two outstanding Clinton plays, held, forcing the Racers to punt.

SEMO State was the recipient of the next big break as a Murray State player inadvertently touched a rolling punt. The Indians' Roland Johnson fell on the ball at the Murray four and Beard scored from two yards out on the next play. Basta tied the score 7-7.

The game started going Murray's way again at the end of the first quarter. The Racers welcomed Hotz to college football with an all-out rush which, combined with a high snap, forced him to eat the ball at his own 35.

Dickens took the Racers in with Lindsey Hudspeth capping the drive on a two-yard TD run with 14:24 left in the half. Elbert's kick made it 14-7.

The Indians helped set up Murray's final score of the first half when they jumped off-sides on a punt attempt to keep a drive alive at the SEMO 32. Reserve running back Tyrus Brown broke off the right side to score on the next play. Elbert's kick made it 21-7, and the Indians appeared to be in big trouble.

The teams exchanged possession before the Indians took over on their own 37. Beard, who had attempted and missed two passes previously, misfired on the first play to Mike Tindall, but found White, who had sneaked out of the backfield. The Racers' secondary finally nailed White at the Murray 25.

The Indians worked the ball down to the five on a pass to freshman wide receiver Ronnie Rencher with 1:00 to play, but Murray State's defense forced two straight losses. The final break of the half went the Indians' way as a Murray State interception at the goal line was nullified on a pass interference call, putting the ball at the one. Wieser scored on the next play, and Basta's conversion put the Indians back in the game, trailing 21-14.

Here is the obituary from the June 27, 2017 Southeast Missourian: 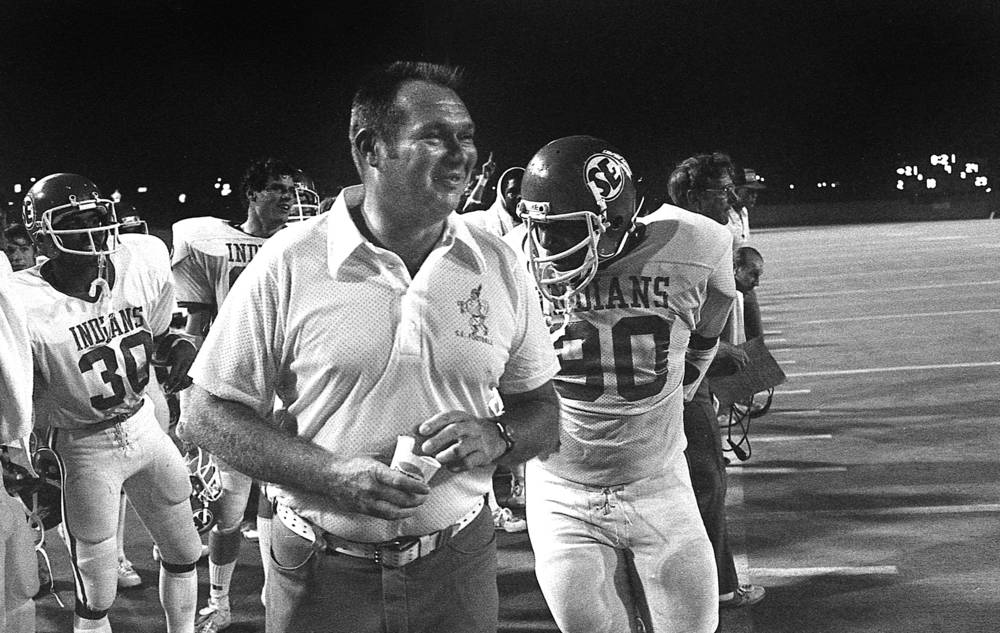 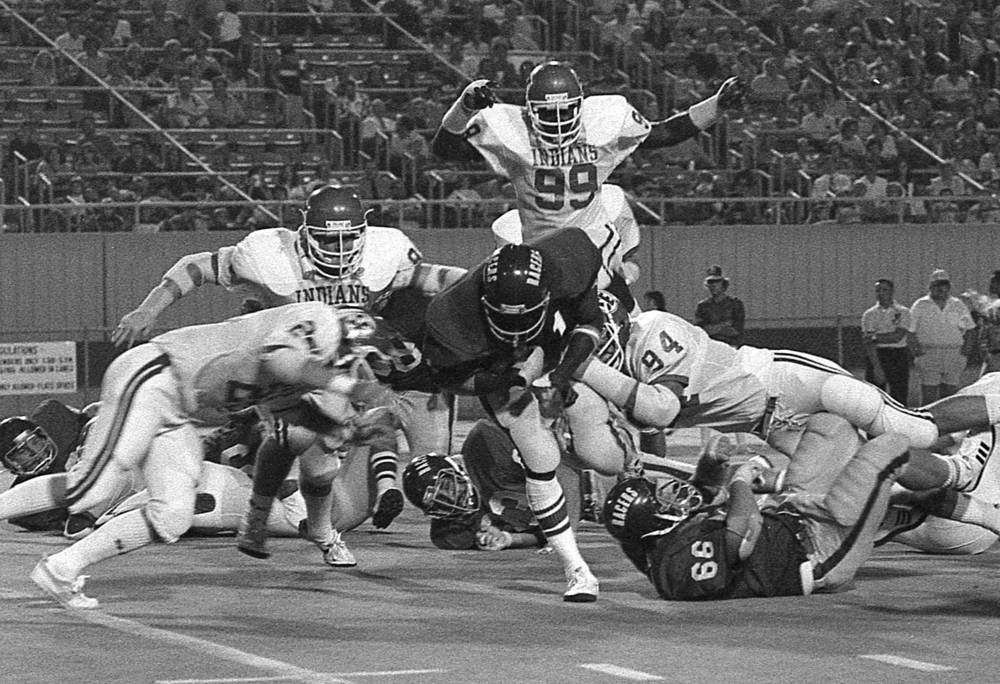