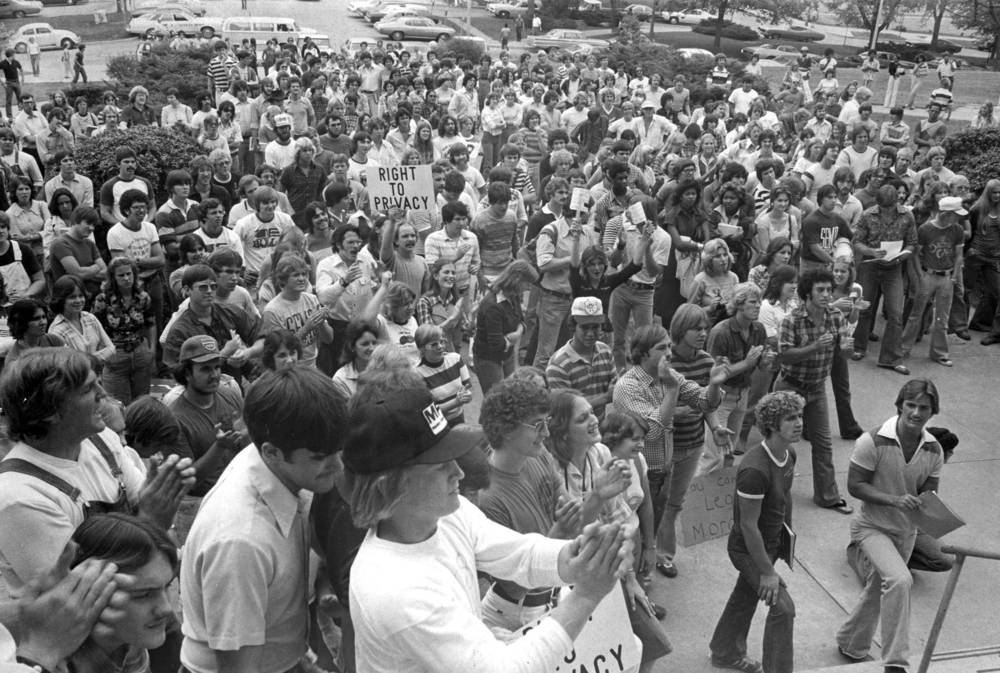 About 300 SEMO State University students gathered Wednesday in front of the school's administration building to witness a protest against the university's present open house policy in the dormitories. See more photos below story. (Phil Nash photo)

Applause and chants of "open house" came from the crowd of about 300 students gathered in front of Academic Hall on the SEMO State University campus Wednesday afternoon to protest visitation regulations in the university's dormitories.

The rally followed two days of encampment by some of the protesters on the east terraces to draw attention to their dissatisfaction with present policies.

Dr. Robert E. Leestamper, university president, who was present during the rally and met with a small group of protesters in his office later, did not back away from his position and indicated a stricter policy might be adopted.

"It's very likely the policy will change but I don't know which way. If the topic is pressed too much, the Board of Regents may decide to do away with open house all together," he told a reporter.

The protesters had conducted a two-day petition signing campaign at their campsite and in the dormitory cafeterias. The petition, which contained 1,700 to 1,800 student signatures, was presented at the rally to Dr. Leestamper by Jim Benz of Overland, a resident of the 12th floor of Towers South and one of the organizers of the protest.

Major points in the petition included requests that:

1. University guidelines governing the hours open house will be in effect be extended.

2. Each dormitory be allowed to set its own standards for open house based on a popular vote among residents within each residence hall.

4. The present sign-in, sign-out procedure for guests be modified or abolished.

5. A policy be initiated so that residents may close their room doors, if members of the opposite sex are present during open house.

6. The petition be acted upon immediately.

Present guidelines dictate that the maximum hours that open house may be in effect in any residence hall are from 8 p.m. until midnight Fridays and Saturdays and from 3 until 10:30 p.m. Sundays.

However, the university also requires that university personnel directly supervise the program which reduces the number of hours each dormitory has open house.

He said he feels that all points of the petition will be met eventually, but probably not immediately.

Greg Stricker, a senior and former resident of the Towers Complex, spoke on behalf of the Student Government Association at the rally.

He read a resolution passed by the SGA containing the following points: That the present open house policy is unsatisfactory; the student government supports the protest of the present policies, and the SGA pledges to work with the university administration toward a solution.

However, SGA did not specifically endorse the petition.

"We're trying to get everyone on the campus involved," said one of the rally speakers. "We're adults. We can vote, we can join the Army, we should be treated as adults."

According to Miss Kim McKeague, a sophomore at SEMO and a speaker at the rally, a number of other area institutions have incorporated more liberalized forms of open house than exists here. She said that among regional universities with more open house hours are Northeast Missouri State University in Kirksville, Southern Illinois University-Carbondale, the Universities of Missouri-Rolla and Columbia, and Southwest Missouri State University-Springfield.

University Chief of Security James E. Gregory said he was pleased with the conduct of the group. "It was a very orderly crowd," he said. "We didn't anticipate any problems and we didn't have any."

Following student speeches, Dr. Leestamper made some remarks to the crowd before adjourning to a meeting in his office with a small group of protest leaders.

"A lot of campuses have little supervision of open house," he told the rally, "and I don't think they're meeting their responsibility.

"I don't think it's an appropriate thing for the university to do," noted Dr. Leestamper in reference to a 24-hour intervisitation policy.

The president's remarks were met by boos by some of the more vocal protesters in the crowd.

In reference to a 24-hour policy, Mr. Benz said Monday, "We don't believe anyone wants 24-hour intervisitation, but we would like to see it returned to last year's hours."

In the conference that followed the rally, Dr. Leestamper explained that there is "a greater likelihood of non-students coming into the residence halls during open house." He said he believes that with a greater number of non-students in the dormitories, vandalism and theft are more likely.

He told the protesters that it is too late for them to be placed on the agenda of next week's regents' meeting, but he said that he would make a report to the board on the situation.

"I have not been willing to recommend to the board either a closed door or a 24-hour policy," Dr. Leestamper remarked.

Several of the protesting students said they plan to have the open house issue placed on the regents' November meeting agenda.

According to Shelton E. ("Butch") Smith, university housing director, "The choices we saw before the semester began were to do away with it (open house), create a closed door policy and let the students govern themselves, or sit down and develop some guidelines."

Dr. Leestamper said he believes Wednesday's rally was productive because it helped facilitate communication and he believes that as a result of the controversy, changes will be made in the policy one way or another.

Read about the regents' reaction to the protest at their September meeting below. 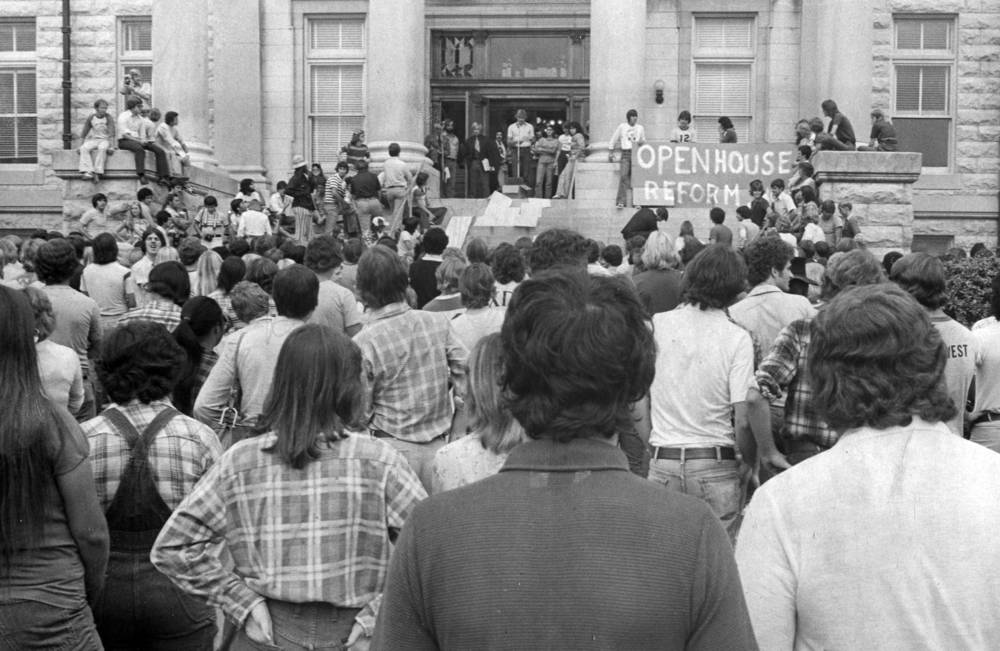 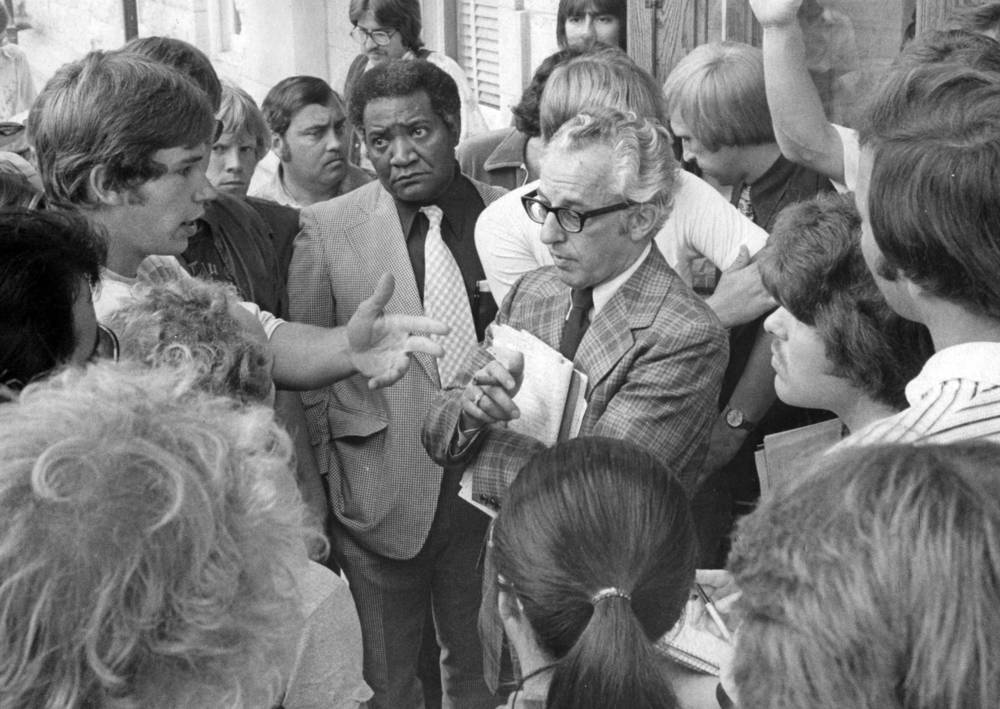 The controversy over open house policies at SEMO State University was briefly discussed by regents Thursday, with two members of the governing body indicating little sympathy for students.

"All this commotion," said C.A. Juden, regent from Cape Girardeau, who at one point during Dr. Robert E. Leestamper's review of the policies said, "I thought your letter was very clear, but apparently they don't interpret that in the way in which I read it."

He was referring to a protest tent encampment by students on the terraces, a demonstration on the steps of Academic Hall, and two subsequent meetings between protesters and Dr. Leestamper over the issue.

And the letter mentioned was from Dr. Leestamper to students explaining his position against "intervisitation" permitting members of the opposite sex into dorm rooms behind closed doors--which was mailed in June. Regents in July fully endorsed the president's position.

Mr. Juden commented that he understood the letter to say to students, "you can come under our rules or you can go where you want to and make your own rules." The letter gave students the option of living in residence halls by university rules or moving off campus to private housing.

Regent Elvis Mooney of Bloomfield asked whether "the protest is a protest of your letter?" The president acknowledged it was. Mr. Mooney had earlier indicated he was opposed to intervisitation.

Dr. Leestamper said the problem which had arisen was in part "miscommunication," and for some, "a fundamental difference of opinion."

What the protesters have asked, he said of petitions circulated, is basically an intervisitation policy. He said some other institutions in the state permit such a program, but "I have taken the position that even if the majority of institutions do it, the majority is not always right."

Dr. Leestamper reiterated a point made at the July meeting: "I will not recommend a policy of intervisitation.

The president indicated there was a range of feeling among students on the question. "While some feel keenly about it, others are unconcerned; some don't think it fair to have them move off campus.

Demonstrators have been orderly and have not interfered with normal university activities, the president said. "They presented no difficulty at all."

Implementation of new rules on open house this fall included stricter staff supervision, fewer open house hours in some cases, although individual dorms were given a choice of the number of days. Primary opposition has come from Towers.

Additional information will be furnished regents in November, Dr. Leestamper said, when he may have new recommendations.

At the regents' November meeting, student representatives on both sides of the issue presented their views to the regents, as reported in the Nov. 18, 1977 Southeast Missourian.

Jim Benz said that privacy was the major reason for permitting closed doors. "What we want is a broad policy where students from each dormitory can select their own policy," Benz said. He characterized the dorm rooms as "our home," yet, he said, students had not been involved in setting of policy.

Mark Lodge voiced opposition to any expansion of the visitation policy. He cited the moral issue as the basis for opposing closing doors and that "it is not sufficient to say that other schools are doing it."

Regent James H. Estes asked Mr. Benz if the primary reason for open house was for study. He asked, "Are there other places to study on campus? Do you find standing room only when you go there?"

Regent C.A. Juden said the opinion survey by the students was full of inconsistencies. He noted in one section that about one-third of respondents said they were 18 or 19 years old and elsewhere most indicated they had been in school several semesters.

"Apparently, most of them graduated from high school when they were 15 or 16," he said.

Mr. Benz asked that additional study be made of the situation. The regents agreed to continue the present policy and seek more information.

There will be no intervisitation program in SEMO State University housing units for students, the Board of Regents said this morning. Regents went along with a recommendation by SEMO president, Dr. Robert E. Leestamper, that the present program of open house which permits students of opposite sexes to visit in their rooms but not behind closed doors, be continued.

A significant amount of study was done on the question as a result of student demonstrations last September and a request that intervisitation be permitted.

Two sets of documents were presented the regents. They included a survey of student preferences and that of their parents.

Eighty-two percent of the students living in dormitories felt they should have the option of closing their dormitory room doors. Almost none of their parents agreed, and 25 percent of parents say they would either remove their children from the university or discourage further attendance at SEMO if such a policy were implemented.

Current university policy permits open house to be in effect from 8 p.m. to midnight on Friday and Saturday, and from 3 to 10 p.m. on Sunday.