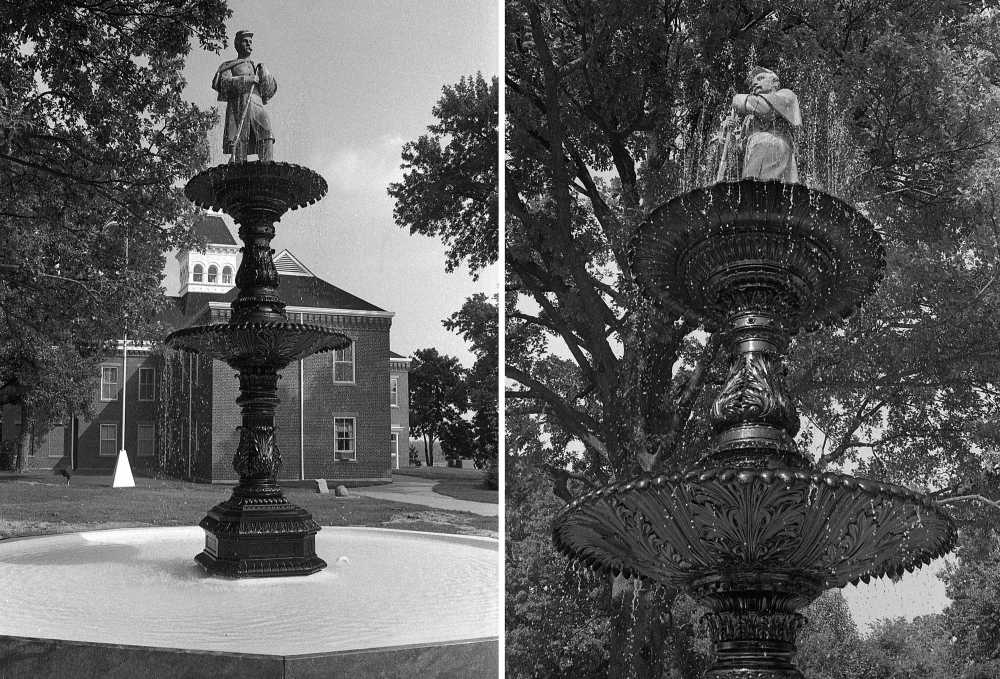 These pictures show the fountain that was restored by Cape Girardeau firemen in Common Pleas Courthouse Park in 1982. The cast-iron statue of a Civil War soldier stood until May 12, 2003, when a limb from a nearby oak tree fell, smashing it to smithereens. Read about the statue's demise and replacement in this previous blog.

The Union soldier atop the fountain in the city's Courthouse Park looks as fresh today as the day he assumed his post in 1911, thanks to a lot of volunteer labor provided primarily by the Cape Girardeau Fire Department.

The fountain's new recirculating pump was switched on Friday, shooting a cascade of water around the figure on the fountain.

Efforts to spruce up the fountain began last month after the Cape County Court, which maintains the Courthouse Park, reported that the fountain was wasting hundreds of dollars worth of water each month, and that it would probably cost thousands of dollars to repair.

The volunteer labor courtesy of the local firemen shaved a good deal from that repair cost estimate.

Assistant Fire Chief Gene Hindman estimated that the 26 firefighters who worked on the project put in a total of 520 man-hours doing such things as sandblasting the monument, scraping off old paint, installing new plumbing, and giving the 71-year-old fountain a general facelift.

Although the fountain has been turned back on, Hindman said several details are yet to be attended to. The plaque in front of the fountain was removed when the renovation project began, and it is in the process of being polished before it is put back into place.

Also, the soldier's left hand has to be placed back on his arm, but not before a document bearing the names of the firemen who worked on the fountain is placed inside the hollow arm, there to remain until the next time the hand comes loose. The hand is expected to be put back on the statue Tuesday.

Hindman estimated that the materials for the renovation cost approximately $2,500 including the new pump. The materials were paid for through private contributions. A number of materials were also donated for the project, including the paint. Missouri Utilities installed lighting for the fountain and the Cape Girardeau Public Works Department helped with some of the trenching necessary for the new plumbing.

In addition, Hindman said the county will be re-landscaping the area around the fountain as part of the monument's facelift.

Although plans aren't finalized, Hindman said there will probably be a re-dedication ceremony for the fountain in the coming weeks.

Read more about the fountain restoration in this previous blog:

Ivers Square is the new name of the former Common Pleas Courthouse Park.