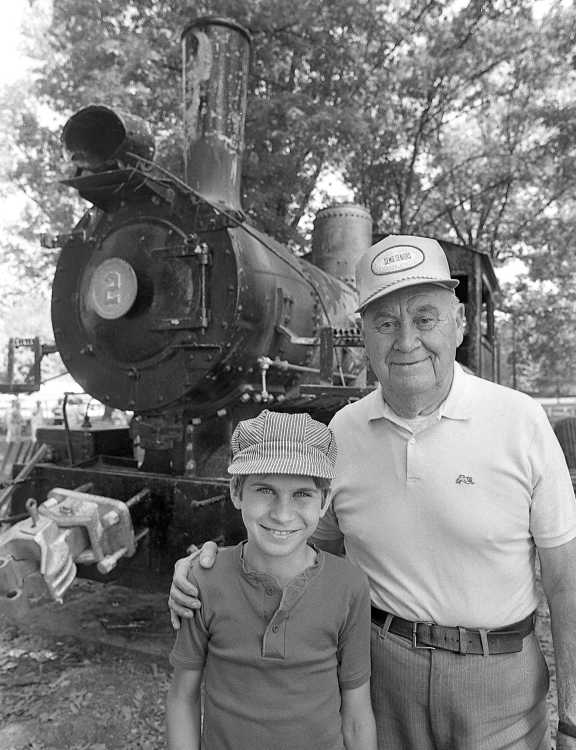 The train engine in Arena Park will bear the nickname of Jim Johnson's great-grandfather Virgil "Hoppy" Hopkins. The name was chosen from over 1,200 entries. "Hoppy" worked on the train when it was in operation at Marquette Cement. (Fred Lynch photo)

CAPE GIRARDEAU - An 11-year-old Cape Girardeau boy thought the train at Arena Park should be named after his great-grandfather who worked on the train while it was still in operation at the Marquette Cement Plant.

So, Jim Johnson entered the nickname of his great-grandfather, Virgil Hopkins, in a contest to name the train. And "Hoppy" was selected from more than 1,200 entries.

"My great-grandpa was a switchman on this train from 1933 to 1957," Jim wrote on his application form. "His name is Virgil Hopkins (Hoppy). He hopped on this train at the Marquette Cement Plant for 25 years."

Saturday, Jim and his great-grandfather were presented four tickets on the St. Louis, Iron Mountain and Southern Railway in Jackson for winning the contest.

Hoppy (Hopkins), 79 years old, said he was very pleased that the train he had worked on so many years will now be named after him. He also expressed gratitude to the three Optimist Clubs who have worked to restore the train at Arena Park and the other train at Capaha Park.

Both of the trains were threatened with removal when asbestos was found in them. But the service clubs stepped in and mounted a "Save the Trains" campaign. Private funds were collected to pay for removing the hazardous material.

Now, with volunteer labor, the trains are almost restored. Tom Meyer from the Evening Optimist Club said they were waiting to locate a sandblaster to complete the job. "We're hoping to get the sandblasting donated," Meyer said.

When the work is completed, small plaques will be placed at both trains during a re-dedication ceremony.

The train at Capaha Park is named "Dinky," as the trains were called when they were in service at Marquette Cement. But Optimist Club members thought it would be nice to allow children who play on the trains to name the other train.

"All the entries were very original," said Meyer. Names like Arena Express, Blinky, The Little Train That Could, and Dinky II were entered. "But this one had the background."

"They're fun to play on," said Jim. "I was kind of disappointed when we first couldn't play on them. I'm glad they didn't get rid of them."

Jim is a fifth grader at St. Vincent's Elementary School. He is the grandson of Jack and Joan Johnson of Cape.

Hopkins worked at Marquette Cement for 41 years from 1930 to 1970. When he retired he was an engineer on the train which is now named after him.