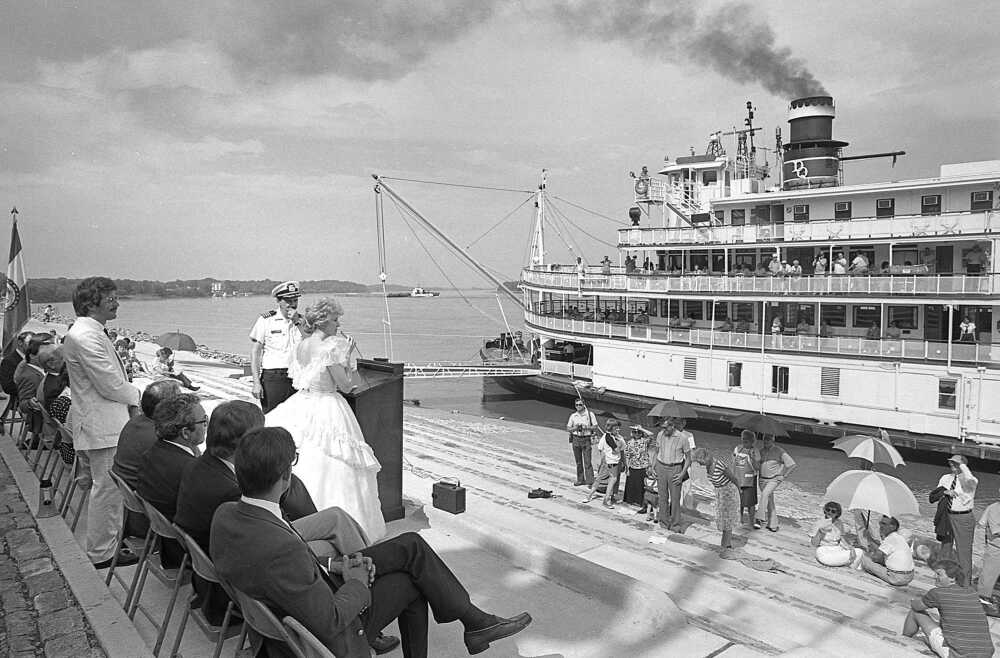 Nadine Louibiere, cruise director for the Delta Queen steamboat, speaks at the dedication ceremony for the Riverfront Park amphitheater on May 13, 1987 in Cape Girardeau. (Mark Sterkel photo)

CAPE GIRARDEAU - A crowd of about 200, including passengers on the Delta Queen steamboat, turned out for the dedication of Cape Girardeau's riverfront amphitheater Wednesday.

The steamboat was making its first stop in Cape Girardeau this year.

A large number of area officials attended the dedication of the $165,710 concrete and cobblestone amphitheater, which marked completion of the riverfront park, located on the Mississippi River side of the floodwall.

The dedication, which concluded with the launching of several hundred red, white and blue balloons, celebrated more than the completion of the riverfront amphitheater. It celebrated Cape Girardeau's rich river heritage.

Even a thunderstorm which passed through the area, immediately prior to the 3 p.m. ceremony, didn't dampen the spirits of those who gathered along the riverfront.

Like the majestic Mississippi itself, the dedication ceremony just kept rolling along.

"Cape Girardeau's riverfront has a rich heritage which had considerable impact upon the growth and prosperity of the region. It's a heritage well worth preserving and promoting," noted Bob White, director of the Center for Regional History and Cultural Heritage at SEMO University.

White, who was the featured speaker at the dedication, recounted some of the community's river history.

He pointed out that the river was "the water highway for Cape Girardeau and Southeast Missouri from its first settlement in the 1790s.

"People today, drawn to its muddy edge, may have visions of past steamboat days when Water Street was the hub of commercial activity. The Mississippi was the lifeblood of Cape Girardeau and the settlement's orientation was toward the river."

White noted that Cape Girardeau didn't have a direct rail connection to St. Louis or Memphis until after the turn of the century." And some considered travel by steamboat more comfortable and relaxing. The price was also reasonable."

During the 1890s, one could take round-trip passage to St. Louis by steamboat for $2. Cattle were shipped to St. Louis for 50-cents a head, while wheat was shipped for five cents per sack.

During the first decade of this century, Cape Girardeau was served by five steamboat lines.

"To determine the volume and value of freight shipped by steamboat, one only has to note the loss of $30,000 worth of leather when the steamer 'Cape Girardeau' sank in 1910," White noted. The shipment was for the shoe company located here.

Perhaps nothing reflects Cape Girardeau's love affair with the river more than the April 23, 1924 christening of the Eagle Packet Company's "Cape Girardeau" steamboat, the third such boat to bear the city's name.

According to White, it was estimated that 5,000 people gathered at the riverfront to witness the event.

The last regular steamboat service to Cape ended in September 1931. But, White said, the river still remains important to the "well-being" of the community.

"Although the city seemed to turn its back on the 'Old Man' in the past, in most recent years more attention has been focused upon this vital natural resource.

"Let us not forget the rich heritage and contributions this great river has bestowed upon us."

Downtown merchants, city officials, and civic leaders said the development of the riverfront park was a community effort.

Downtown restaurant owner Mary Foote noted that she and other private investors raised $30,000 to help develop the riverfront park. Another $30,000 was provided by the Downtown Special Business District.

Foote recalled that not long ago the Cape Girardeau riverfront "was full of litter and rubble. It was an eyesore."

Looking over the expanse of the riverfront park Wednesday, Foote observed, "Quite frankly, I love this park and I love this river."