The Bridge over 'The Big Ditch' 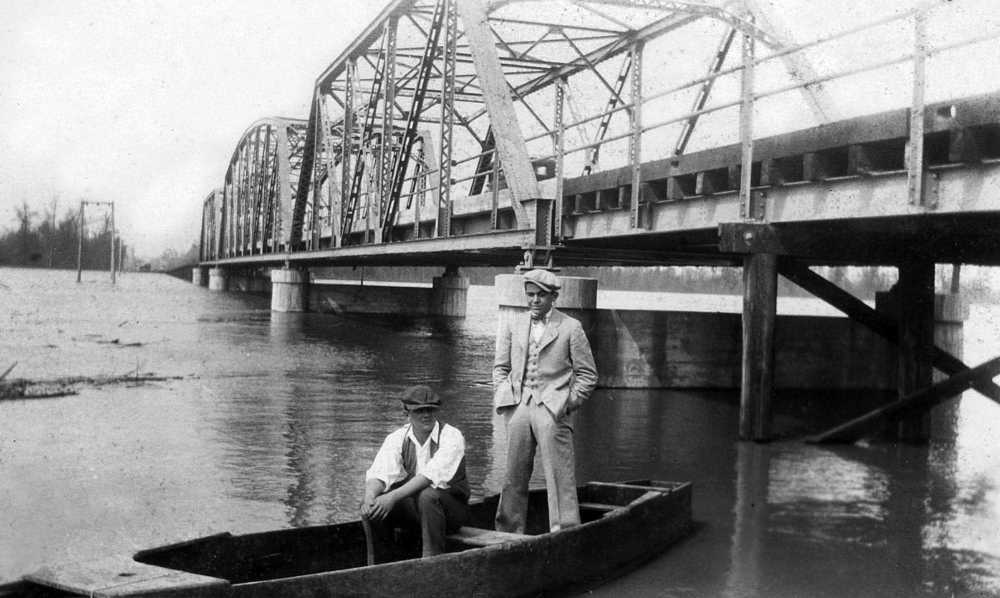 Glenn Lampley, left, and Milburn Miller pose for this photo taken in 1927 at the bridge over the flooded Diversion Channel. (Photo courtesy Eloise Schrader)

Big Bridge Spans are in Place

The $150,000 bridge spanning the floodway on Kingshighway, south of Cape Girardeau, will be completed within less than six weeks, Dennis Scivally, resident engineer for the State Highway Commission said today.

The three spans over the diversion channel proper have been swung into place, the piers completed, and all that is needed to complete this section of the long bridge is the pouring of concrete on the roadway, and painting of the beams.

This was the most difficult part of the construction of the bridge. To span the diversion channel, it was necessary to erect piers at the water's edge on each side of the channel, and others 100 feet back from the bank. The span across the channel proper is in three sections, two of the spans being 100 feet in length and one 150 feet.

Scivally said that grading is being carried on daily on both the Cape and Scott county sides of the channel, with indications it will be done by early spring.

A dedicatory celebration, when the bridge is formally opened, is being planned.

New Bridge Open for Use Tomorrow

The big diversion channel bridge, completed at a cost of $150,000, and the stretch of concrete on either side, will be thrown open to traffic Tuesday morning, according to Dennis Scivally, state highway engineer. The new piece of highway cuts off several miles in state road No. 9 [later known as U.S. 61] south of here.

Some delay has been experienced in completing the bridge on account of late shipment of some asphalt materials to be used on the floor of the structure. It was necessary to lay the asphalt to cover the expansion joints which are at regular intervals across the bridge. The last panels of the floor were covered today and the project will be ready for use Tuesday. Motorists removed the barricades last night and drove over the rough floored section of the bridge, so anxious were they to try the new highway and escape going over the rough road formerly used.

Although the last of the asphalt was laid today, workmen will be doing finishing work on the shoulders and on the bridge for several days, officials said today. Warning flags will be kept up in such instances as much as possible, but motorists are asked to watch for the men so as to prevent accidents.

Fellow blogger James Baughn details the history of "the audacious project to drain Swampeast Missouri" in a three-part series: