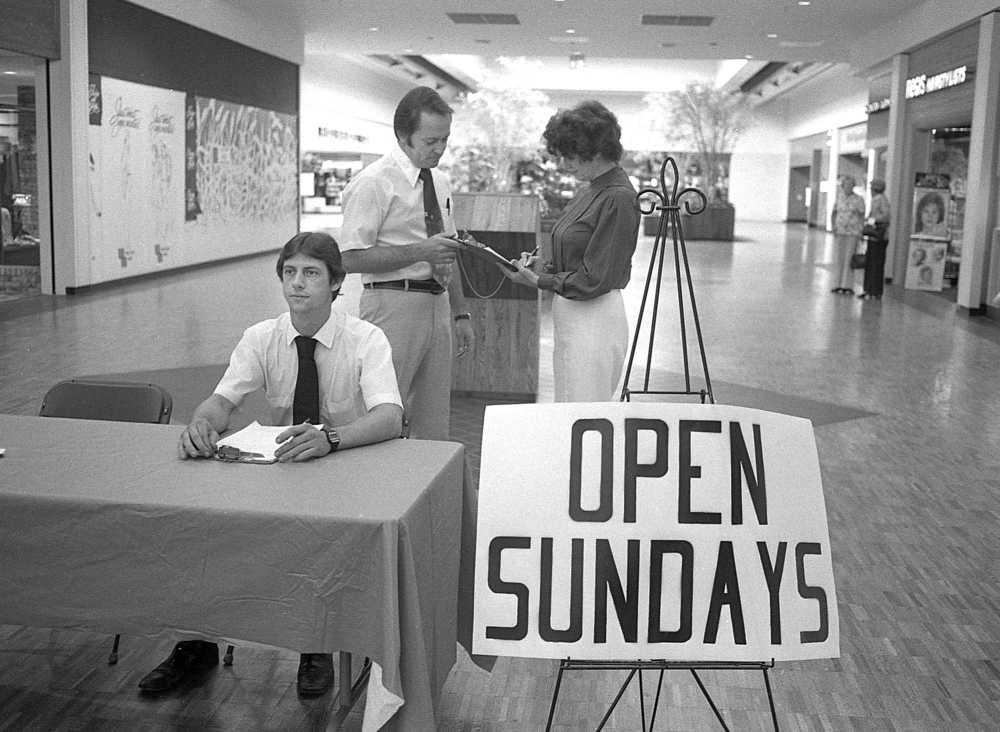 A petition drive is underway in Cape County to put the question of Sunday sales before voters in the November election. The drive, headed by an action group known as the "Open Sundays Committee," seeks to have the state's Blue Law repealed in Cape County, thus clearing the way for businesses to open on Sundays. Here, at a petition booth at West Park Mall, Jim Mayhew gets a signature from Peggy King as Terry Warren keeps an eye out for potential signers. Slightly more than 2,000 signatures of registered Cape County voters are necessary to put the issue on the ballot.

The Sunday sales statute that governs modern-day Missouri likely had its origins from the "Blue Laws" set down in the 1700s for colonists in New Haven, Connecticut.

The laws -- "blue" because they were bound with a blue paper cover -- dealt not so much with Sunday sales as with Sunday behavior. For example, the Rev. Samuel Peters (who wrote the laws in his "General History of Connecticut") declared it illegal on Sunday for anyone other than an authorized clergyman to cross the river on Sunday.

Although it may be fine to "take time to smell the flowers" as the saying goes, colonists couldn't do that in their gardens, for walking in gardens was forbidden. And in the event of a chance encounter with a not-so-friendly Indian, they apparently had little choice but to offer the peace pipe, because running in all forms was banned on the day of rest.

Other laws Peters set down forbade women from kissing their children on Sunday; prohibited travel, cooking, the making of beds, the sweeping of houses, shaving and cutting hair.

Peters also frowned upon the making of minced pies, dancing, card playing and the playing of any musical instrument except the drum, trumpet and Jew's harp.

Peters' laws were exaggerated, probably because he was forced to leave New Haven and decided to make fun of other laws by exaggerating them. However, laws a severe as those Peters wrote were a part of life for many in the Massachusetts and New Haven colonies.

The Sunday sales laws that exist today are moral in origin, and are dubbed Blue Laws because they outline specifics for Sunday -- at least in the business arena.

John Klaffenbach, assistant attorney general for Missouri, said what eventually evolved into a Sunday sales law got on the books about 1814 as a "Sunday Observance Act." The first of the sales laws can be traced to 1914 as part of the territorial laws, but the beginning of the current law was not until 1963. That law was amended in 1977 but is essentially the same.

One of the earliest "Blue Law" cases was in 1854, Klaffenbach noted. In that year compelling the observance of Sunday was ruled to be constitutional.

Violation of the law is a misdemeanor.

Klaffenbach said enforcement of Sunday sales laws is generally left up to the prosecuting attorney of each county.

A problem with the law is that it is specific and vague at the same time. It is a law that Klaffenbach admits has seen "some difficulty." He added, however, that if the law were pushed to its most technical "even garage sales would be illegal on Sunday."

Changes in the Blue Law in the early 1960s were brought about when the supreme courts of both Missouri and neighboring Kansas ruled the laws void. Missouri responded by adopting a form of the Blue Law that complied with the Supreme Court ruling. But Kansas rejected repeated attempts in its legislature to re-enact any form of the law which it passed in 1861.

Most of the states bordering Missouri -- Arkansas, Illinois, Iowa and Kansas -- allow Sunday sales. The fear that Missouri was losing too much business to those other states led the Missouri legislature to approve a plan that allows counties throughout the state to decide for themselves whether to do away with the traditional ban on Sunday sales.

Cape County voters will get their chance to speak out on the issue in the November general election.

Some businesses here are already open on Sunday and are within the law by doing so. Car parts shops are open and are not specifically prohibited from doing business on Sunday in the state statute, according to Mike Mirgeaux, one of the owners of Kar Parts here.

"We researched the law thoroughly before we reached the decision to be open on Sunday," he said. Service stations are also not covered by the law, and in some cases sell many of the same items that car parts stores handle.

"The law says we cannot sell tools -- like a hammer. But we can sell specialty tools. If it's a regular wrench, we can't sell it; if it's a specialty wrench to take brakes off with, for example, we can sell it."

Mirgeaux said his firm does not sell the items prohibited by law, such as paint, regular hardware and regular tools.

The Blue Law repeal proposition carried 28 of the 38 county precincts, including all but one of the 18 city wards in Cape Girardeau.