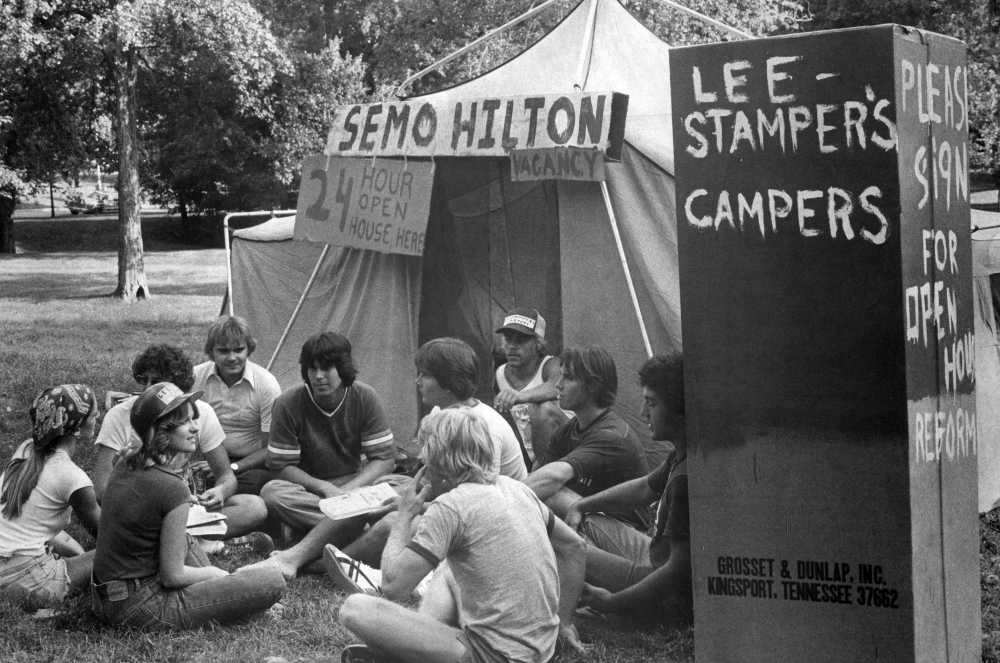 Students opposed to new stricter open-house rules at SEMO State University set up a tent encampment to dramatize their displeasure. The students plan a rally Wednesday on the Academic Hall steps at 1 p.m. They want a relaxation of rules for permitting students of the opposite sex in residence hall rooms. One major complaint is the reduced number of hours the halls are open as compared to last year. Stricter rules were devised after numerous violations occurred. (Don R. Smith photo)

A student group opposed to more stringent residence hall rules at SEMO State University set up an encampment Monday to begin a protest.

The rules affect hours and conditions under which members of the opposite sex may visit in dormitory rooms.

The encampment, three tents on the east terraces across from the Social Science Building, is meant to call attention to the students' complaints and promote a 1 p.m. rally scheduled Wednesday on the front steps of Academic Hall.

In the meantime, a meeting between student representatives and university president, Dr. Robert E. Leestamper, has been set for Wednesday to discuss the grievances.

Dr. Leestamper said this morning that it is not the school's intention to remove the demonstrators unless they interfere with classes. He said he did not know what response might be made to the students because, "we don't yet know what their concerns are."

The protest, members of the group setting up the encampment Monday said, was prompted by experience with the university's limited open house program. This past weekend was the first time this fall residence halls were under new rules.

Jim Benz, a resident of Towers South, was acting as spokesman for the group of about one dozen students setting up the tents Monday afternoon. He said the decision was made by residents Sunday to protest.

Those rules, implemented over the summer after last year's experience when violations of the open door policy occurred--a policy where members of the opposite sex may be in the room, but doors must remain open--called for stricter supervision.

Because of the requirement that university personnel must directly supervise the program, the number of hours the floors are open has been reduced.

In addition, Dr. Leestamper wrote students who had signed up to live in the residence halls and advised them that they had the choice of living on campus and accepting the new guidelines or they could move off campus.

Since returning to school in August, the new guidelines and rules established have been an issue with students. Their practical effect was felt this weekend when the first open house period was permitted.

Mr. Benz said Monday that students felt it was unfair to make "everyone suffer for the action of a few." He said the students knew there were violations of the rules, violations, he said, which were continuing even with the new rules. "You can't legislate morals," he said.

"We just can't put up with this any more," he said. He maintained students from virtually all residence halls were represented in the group seeking to draw attention to the problem and an easing of the rules.

Petitions are being circulated as students file across campus to classes and the Wednesday rally is being promoted. A number of students spent Monday night in the tents.

Mr. Benz said the group had no intention of breaking any rules or interfering with the university.

A crucial point with the demonstrators is the reduction in the number of hours permitted for open house. "It has been cut from 26 to six," Mr. Benz pointed out. "We don't believe anyone wants 24 hour intervisitation, but we would like to see it returned to last year's hours."

Members of the group chimed in their complaints as well. They opposed the sign-in requirement at the Towers office and additional sign-in at the PA (personal assistant) door, too. The Sunday 4:30 p.m. to 10:30 p.m. hours was the subject of most complaints.

"We should be responsible for our own actions," the students said. They said the rules require the door to be open, with no obstructions between it and the window, and persons in the room "must have both feet on the floor."

Today, the number participating in the protest was growing. Petitions requesting a return to last year's hours were being more widely circulated across the campus.