Out of Egypt: Needles' research journey 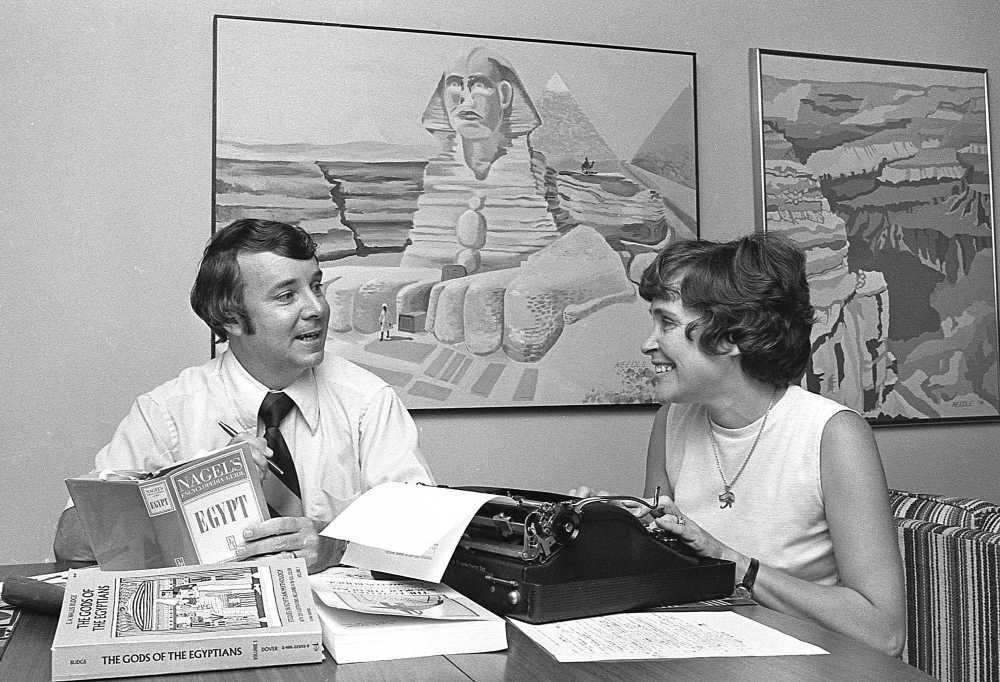 Mr. and Mrs. Frank W. ("Bill") Needle Jr. pore over material on Egypt at their home in Cape Girardeau. The couple made a research journey to that land last year and came away not only with the information they were seeking, but an array of unusual experiences. (Fred Lynch photo)

A London-to-Cairo flight diverted from its normal routing.

A strange request in London to deliver a letter in Cairo to a man in an airline uniform.

A mammoth bodyguard insuring safety in an Oriental bazaar.

Cobras released on the ground to encourage donations to the owner.

Spiders in the drinking water and spaghetti sauce made from cat meat.

Taxicabs racing about at night with lights out.

The incidents could be taken from a particular kind of horror story or a James Bond-type adventure. Or, from a trip taken abroad by a midwestern college professor and his wife.

The latter is the case. Frank W. ("Bill") Needle Jr., chairman of the art department at SEMO State University, and his wife Ruth encountered these and other situations during their research journey last year to England and Egypt to learn more about the Dennis Collection of Egyptian Antiquities.

The ancient and remarkable collection of artifacts will be on display at the university, Oct. 1-31, 1977.

It was tracking down the source of the objects and in tracing the steps of the man who discovered them, James Teackle Dennis, that led the Needles into some unlikely experiences.

The first bizarre event was the business about the letter. In London, a stewardess approached Mrs. Needle, asked her if she were going to Cairo and handed her an envelope, with a name but no address, requesting that she deliver it at the Cairo airport to a man there. "He will have a British Airways uniform on and he will be standing at the top of the stairs when you get to the airport," the woman told Mrs. Needle.

Mr. Needle had grave misgivings about accepting the letter. "How do you know what's in there? Why didn't she mail it? Here she is a stewardess; why didn't she give it to another stewardess?" These were some of the questions he asked.

As might be expected, they couldn't find the man described at Cairo, so Mr. Needle gave the letter to an Egyptian with the request that he deliver it. The Needles never found out what that was all about.

Next, as they were taking off for Cairo, there was an announcement that "due to the situation" the flight would not go directly to Cairo but would go to the southern part of Egypt and fly back northward, the length of the Nile. Military maneuvers were given as the reason.

"They seemed very sinister," Mr. Needle recalled. "There was nothing in the newspapers about military maneuvers. Everyone was quite concerned."

When the plane arrived at Cairo, it did not circle for a gradual descent, but went down steeply, directly to the runway.

The plane was the only one on the ground and it was escorted by machine-gun carrying soldiers.

"It looked like hundreds of Egyptians looking and staring out and ours was the only plane," Mr. Needle said. That was never explained either.

Later in the trip, 600 to 700 miles south of Cairo on a ship in the Nile, Israeli planes heading south whizzed overhead, extremely low.

"Everyone connected with the ship was yelling and screaming in Egyptian and we couldn't tell what was going on," Mr. Needle said.

The captain tried to calm everyone, but concern nevertheless persisted.

"Here we are in Egypt, here are Israeli planes and the conclusion was 'we didn't know what's going to happen,'" Mr. Needle recalled.

After returning to the United States, he rechecked his diary for the date and learned about the raid on Entebbe and concluded that the planes were on their way to Uganda on that famous mission.

But at the time, no one would explain. Again, Egyptian comments were prefaced by "due to the situation."

In Cairo, the Needles made arrangements to go to the Khan el-Khalili Bazaar, the most famous in the city, which was not easy to get to and not safe, they were told, without a bodyguard.

The Needles and others had been warned that the Egyptians would block the stairs at various bazaar booths to intimidate them into buying something.

So a bodyguard named Mohammed, a huge Egyptian Mr. Needle likened to Roosevelt Grier, a former football star, was employed.

"We got up the stairs into one shop and sure enough, they blocked the stairway," Mr. Needle recounted. When he tried to explain his way out of the bazaar, he said keepers just stood there as if they didn't understand.

"So I called Mohammed. Then he would walk in and talk to them in eloquent Egyptian and they just parted and left. So after two or three times, we were glad to have him."

The snake charmers had their own method of intimidation.

At a remote Nile river location, as the group disembarked from their boat, "there was a little man I called the cobra man who threw out three cobras in our path," Mr. Needle said. The idea, he continued, was to induce people out of fear to pay the man to charm the snakes back into the basket.

"So we quickly dashed, the policeman came and chased him away. But he was there, and that is what he would do," the educator continued.

Food and drink was a particular problem for Mr. Needle, who said he was ill during much of the trip and lost 10 pounds. Mrs. Needle fared better.

He said he had been warned not to drink the water but decided to draw a glass and found three twigs and a spider in it.

Some of the food was even worse. The first night in Cairo found the Needles in an Italian-type restaurant whose main fare was spaghetti with meat sauce.

"Well, we thought this would be fine. We began to eat it and my wife said, 'I just can't eat this. What is it?'" Mr. Needle said.

"And I couldn't either; it was just a terrible, terrible taste." He left the table to find out what they were eating and came back with bad news.

"It was cat sauce. Ground up cat meat. And these cats were crawling all over the restaurant."

The taxicab experience is typical for Egypt. At night the cabs would go at break-neck speed but without lights so as, they said, to save them. Only at intersections would they flash their lights momentarily.

The Egyptian method of selling plane fares was interesting. At one remote point, the Needles, along with many others, bought tickets, but it was obvious that more tickets had been sold than there were places on the plane.

"When the guard lifts his hand, everyone rushes and runs for the plane and they take only the number that can fit on the plane," Mr. Needle said. The Needles were fast enough to make it.

And so it went.

But there was another side to the trip. There were few Americans in Egypt at the time; at most locations, the Needles found themselves to be the only ones.

But the Egyptians were quite gracious in many respects.

This was the Bicentennial year, it must be remembered. On July 4, 1976, the Needles were the only Americans in their hotel.

"The first thing they did was knock on the door and present us with a hand-made Valentine-shaped box of homemade candies and a lovely engraved note from the manager of the hotel welcoming us there on our country's Bicentennial and inviting us to an American dinner," Mr. Needle recalled.

The dinner was ice-cold watermelon, a "lovely bowl of soup," roast turkey, corn on the cob, mashed potatoes, and homemade apple pie and ice cream.

It almost was enough to make them forget about cat sauce.