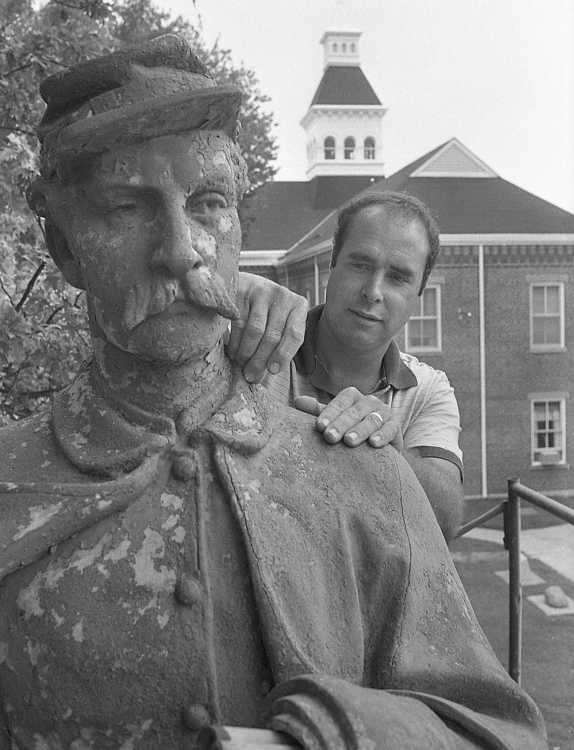 Cape Girardeau firemen began working today on the soldier statue that stands at the center of the historic Courthouse Park Fountain. About a half-dozen off-duty firemen were working on the fountain and statue this morning. Scaffolding was put up, and workers have begun to scrape off green paint from the pewter statue. Here fireman Mike Carlton gently removes years of paint from the statue. Renovation work on the fountain will include installation of a recirculating pump. (Fred Lynch photo)

For 71 years, the stately soldier has stood silent sentinel in Courthouse Park. Through autumn mornings shrouded in fog, through snowy winter nights, through sweet spring dawns, through lazy, slow-motion summer afternoons, he has watched the seasons and the generations pass before him.

During warm weather months his quiet vigil was broken by the pleasant gurgle of cascading water in the wide basin beneath him, and by the laughter of the thousands of youngsters who bowed to whim and rolling up knickers to splash in the cool waters.

For a time recently, it appeared as if the soldier would look down not upon water, but upon plants when the Cape County Court announced major--and not expected--renovations to the fountain would be necessary. The County Court had the fountain shut off last week after it discovered about $400 worth of water a month was running through it. A recirculating pump so that water usage would be minimal would reduce the water bill drastically.

The news that one of the city's most beloved traditions was about to pass into a time that will not come again was greeted with disappointment on the part of many who had themselves dabbled toes, or spent a few restful moments on a park bench beside the fountain, or perhaps strolled around it hand-in-hand with a someone special.

For many, the Courthouse Park fountain holds special memories. And among those people are Mr. and Mrs. Robert D. Harrison.

And thanks to the Harrisons and their fondness of the landmark, water will continue to run in the fountain, children will continue to exasperate their mothers by foregoing formality and coming home with wet jeans and sneakers, and the monument to the dead of the Civil War will remain as it was intended.

A gift in the amount of $3,500 was made today through Mrs. Erna Harrison to see that the fountain is restored to proper working order.

"It is an admirable thing to do," commented Gene Huckstep, Presiding Judge of the County Court. Huckstep indicated that the county and the city may work together to solve problems affecting the fountain.

Harrison, who said he remembers the day the fountain was dedicated, brought the gift to The Missourian this morning, noting his long association with the Naeter Brothers, founders of the newspaper.

"If the fountain is shut off it will become a forgotten thing of by-gone days," he said. "It's dear to our hearts to keep it going."

For many years, the Harrisons lived within a half-block of the fountain in a gracious, rambling brick home in the 300 block of Themis. Harrison strolled by the fountain daily on his way to work (at one time his offices were on the second floor of The Missourian Building) and Mrs. Harrison's late aunt was instrumental in its construction.

"We just couldn't let that fountain be planted with flowers," Harrison commented.

Memorial Day marked the 71st anniversary of the erection of the memorial fountain; its reality was a triumph for the Women's Relief Corps of the Grand Army of the Republic. It was donated to the city in 1911 by the organization in memory of those who lost their lives during the Civil War. The original cost of the fountain was $3,000.

Among those who devoted considerable time and effort toward seeing the monument constructed was Mrs. John T. McCammon, the aunt of Mrs. Harrison who was known to many in this area as "Aunt Sally." For a number of years, she made her home with the Harrisons; she died April 2, 1965, at the age of 95.

At the dedication, Mrs. McCammon said, in part:

"We, the Monumental Committee of the Women's Relief Corps...present to the City of Cape Girardeau this Memorial Fountain as a free gift, knowing that every citizen will point to it with pride, not only for what it represents, but also as a step toward that City Beautiful which we are all striving to attain."

In accepting the gift to the city, Mayor Fred A. Kage pledged that the fountain "shall be guarded as a sacred trust, and handed down to my successor without blot or blemish."

The dedication day was proclaimed a general holiday, and in Courthouse Park during the forenoon the Sons of Veterans and the Women's Relief Corps held a festive reception.

Although the memorial statue and fountain was dedicated to the memory of those men who lost their lives at the time of the Civil War in the struggle to keep the nation as one, it stands now as a symbol of all the men who have fought, died and lived to make the United States great.

Ivers Square is the new name of the former Common Pleas Courthouse Park.