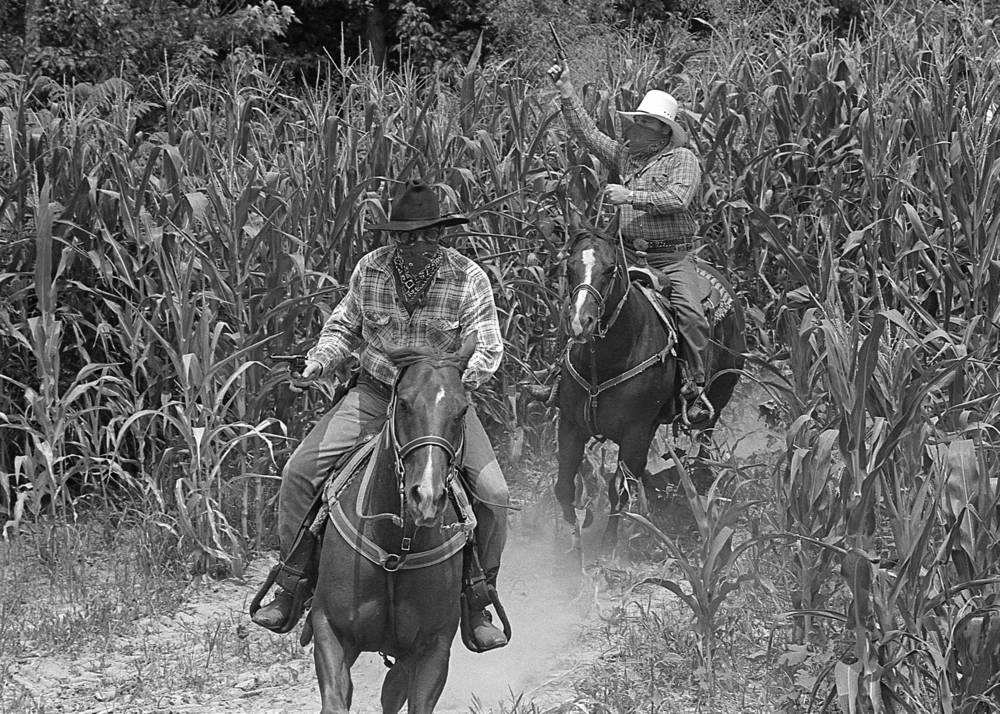 Above, Gene Johnson, left, and John Burton ride out of a corn field to surprise passengers on the St. Louis, Iron Mountain & Southern Railway train. Below, Burton and Johnson catch up to the train. See more photos below story. 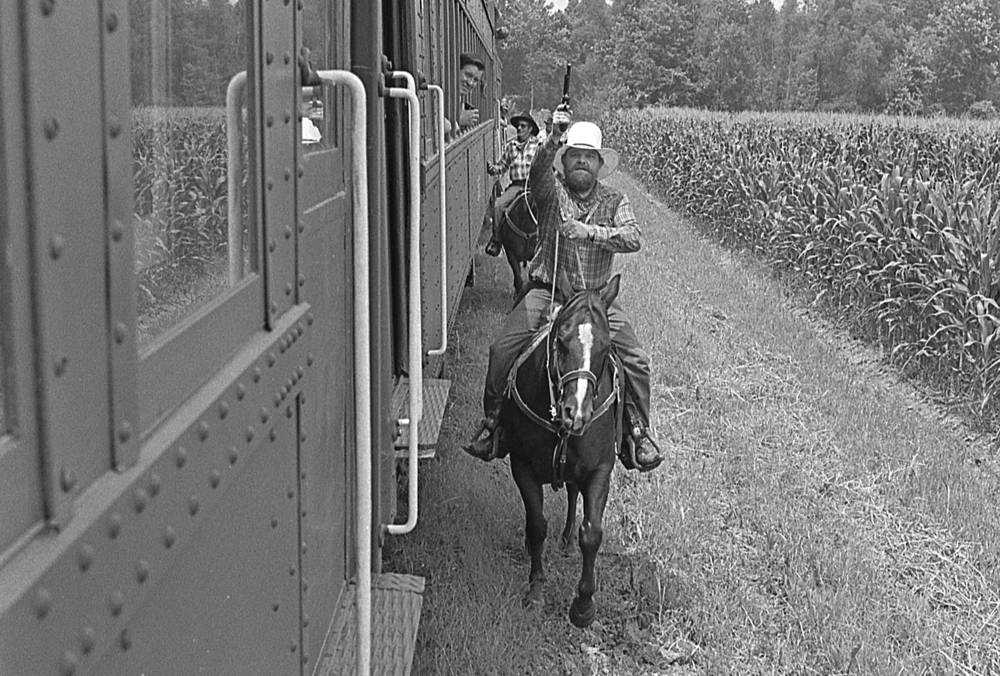 A ruthless gang of gun-toting bandits has been terrorizing Southeast Missouri residents and visitors, robbing trains and most recently a Charleston bank.

Several times over the past year, the masked gunmen have stopped the St. Louis, Iron Mountain and Southern Railway just north of the Gordonville City Park.

These bandits ride up on horseback, gather their loot, and then make a fast getaway before a sheriff's posse can catch them.

The crime spree began about a year ago when the robbers held up the train to help promote the Sikeston Jaycee Bootheel Rodeo.

Since their successful getaway a year ago, the bad guys have been reappearing at different times to raid the train. And the brazen bandits on Thursday escaped after a daring robbery at a Charleston bank during the city's sesquicentennial celebration.

These desperadoes are not the ruthless criminals they first appear to be. They are actually respected Southeast Missouri businessmen and members of the Scott County Sheriff's Posse.

But on horseback, wearing masks and cowboy hats and carrying guns, they could have ridden out of a corn field of the 1860s.

Just like in the olden days, train passengers do not know they are going to be robbed. As the fierce looking bandits jump from their horses onto the train or squeeze through the windows onto a table, screams of surprise and delight are heard.

The robbers burst upon the scene, realistic looking cap guns smoking. "Get your hands up," one robber calls out. "That's why they call this a hold up. You hold up your hands."

In a blaze of fury, they start collecting all the loot they can carry--purses, wallets children, wives. Even a few undergarments wind up in the hands of these capable thieves. Not wanting to pass up anything of value, one bandit spends a few moments checking teeth for gold fillings.

Children and adults alike with arms held over their heads, attempt to recover their composure and their belongings as the bandits talk and joke with passengers.

"I thought that was great. Shawn (her very small son) was fascinated. It was a lot of fun. I'm glad we had a chance to experience this," said Betty Green, of Mounds, Illinois, a recent train passenger and robbery victim.

Shawn shyly admitted that at first the robbers scared him a little, but after he realized they weren't really going to steal his mother, he enjoyed the robbery.

Passengers are delighted by the element of surprise, which many said made the train ride even more enjoyable.

"We weren't expecting this, which made it a great surprise. It really made the train ride a lot of fun, especially for the kids," said Kathy Wallace, visiting from Paducah, Kentucky.

Her 9-year-old daughter Sarah added, "They were really funny. I wasn't scared, but the pop gun was really noisy."

The victims have almost as much fun as the robbers.

Gene Johnson, the leader of the band of outlaws, John Burton and Harold Smith are all from Sikeston. Bob Stallings is from Charleston. Some other bandits occasionally join up with the gang, but these four most often are involved.

They aren't paid for any of their escapades (except any loot they may get away with.)

We just enjoy horses and people," said Johnson. "Whatever the people are up for, that's what we will do," he said. "However the people react, we will carry on with them."

During the week these bandits work at respectable jobs. Johnson is the owner of a Sikeston grain elevator. Burton is a lab technician. Smith owns a fertilizer company, and Stallings is a farmer.

They are all members of the Scott County Sheriff's Posse. That group of horsemen ride in parades and also perform riding drills and formations for a variety of special events. The Sheriff's Posse will be appearing at the rodeo also.

But occasionally on weekends, or for some special train rides, the businessmen saddle up their horses and become cowboys for a few hours.

"I always wanted to be a cowboy," said Johnson. "But I was born and raised in town. If I had my choice, I would have been born in the days of cowboys."

The robbers ride quarter horses which run right alongside the train. The horses wait patiently during the robbery to carry their riders to safety.

It takes a special animal to rob a train, Johnson explained. "Some horses will take to the train, some won't."

Not only do the horses wait patiently while the bandits are robbing the train, the horses also walk peacefully around the Gordonville park, giving passengers a short horseback ride.

The band of robbers has held up the train about 20 times this year. They do not rob every train ride, and passengers rarely know when robberies will take place.

"It brings out the kid in all of us," said Johnson. "Plus it's relaxation. And if it makes the people laugh or smile, then it's worth it."

Burton added, "It's just fun. We get a real charge out of it, and if it makes the ride fun, that's good too." 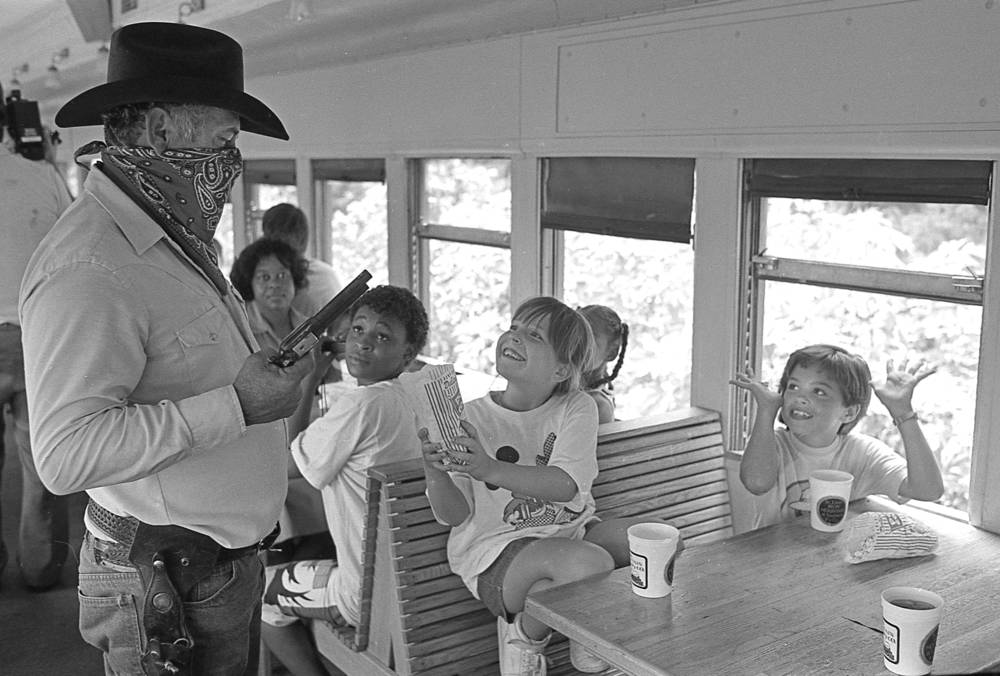 Above, Bob Stallings talks with train riders. Below, Gene Johnson looks for the owner of a stolen item. (Mark Sterkel photos) 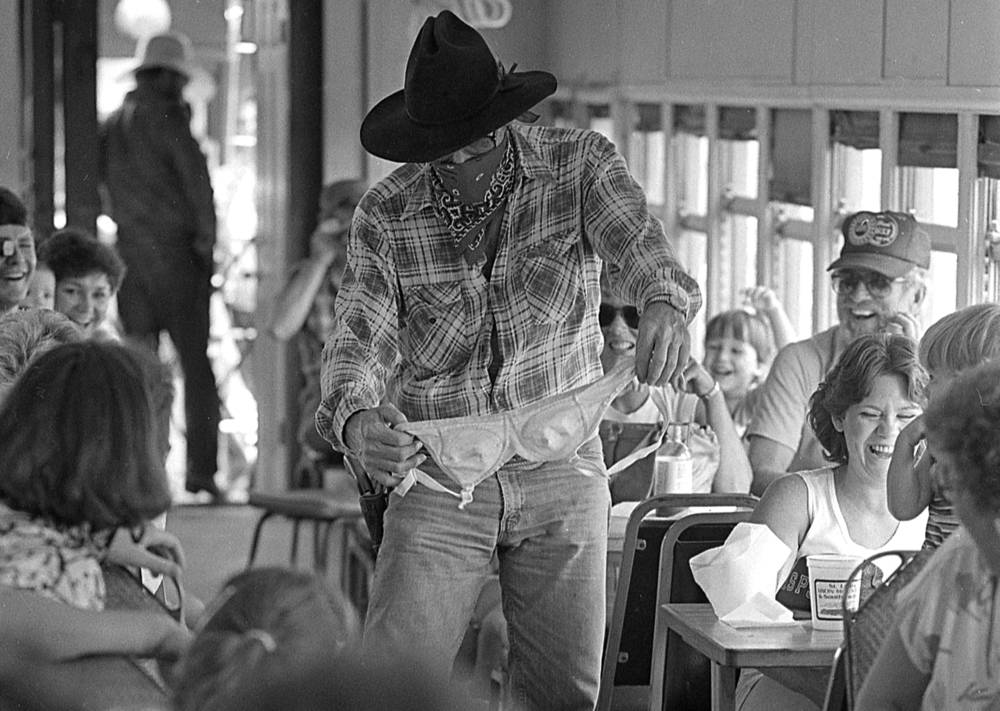