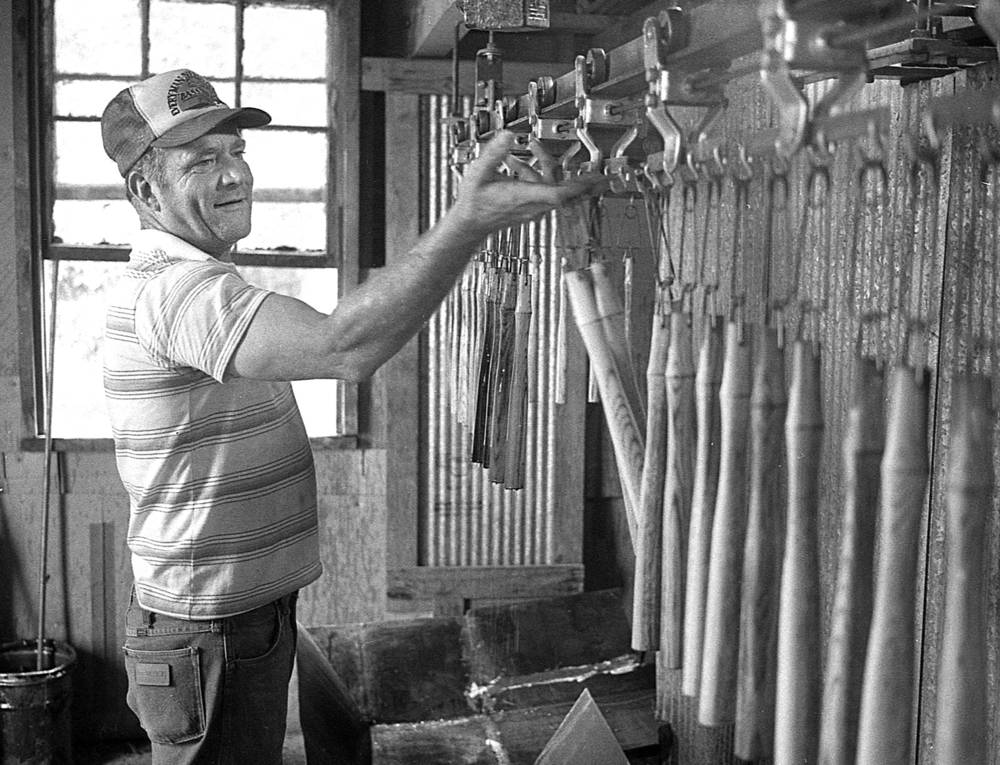 Jackson Chamber of Commerce members and area farmers tour the LaPierre-Sawyer Handle Factory in Jackson. Dealing Runnels, photo above, explains handle grading to the group. In photo below, Marlin Collins explains the lacquer and drying process. The factory visit was part of the annual farm and business tour sponsored by the chamber and the Cape County Pork Producers. The factory, which has been operating in Jackson for more than 82 years, manufactures axe and other striking tool handles, according to plant manager David Cowan. The factory employs about 40 people. Besides the handle factory, the chamber tour also included stops at the Paul Meier and Paul Nothdurft farms, and a visit to the Jackson Police and Fire Complex. (Fred Lynch photos)

Read more about the handle factory in story below: 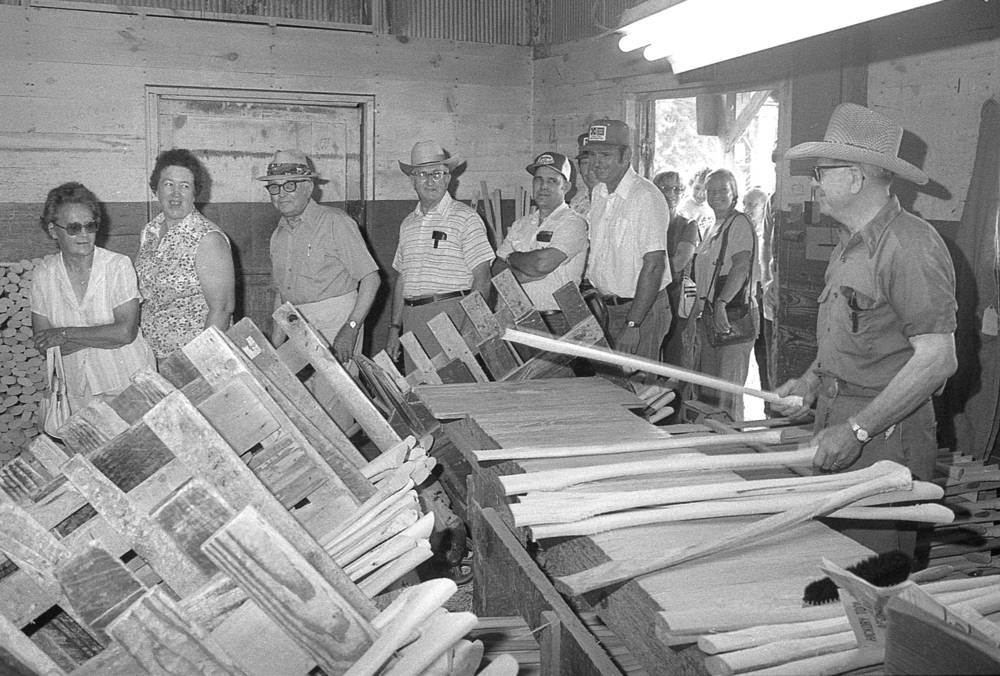 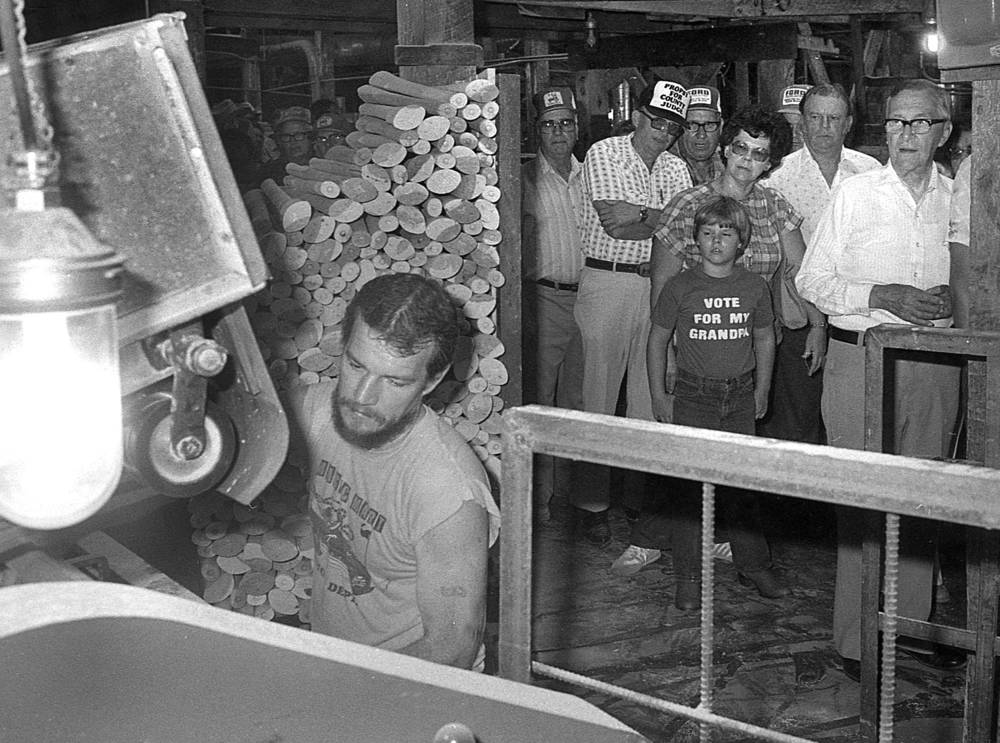 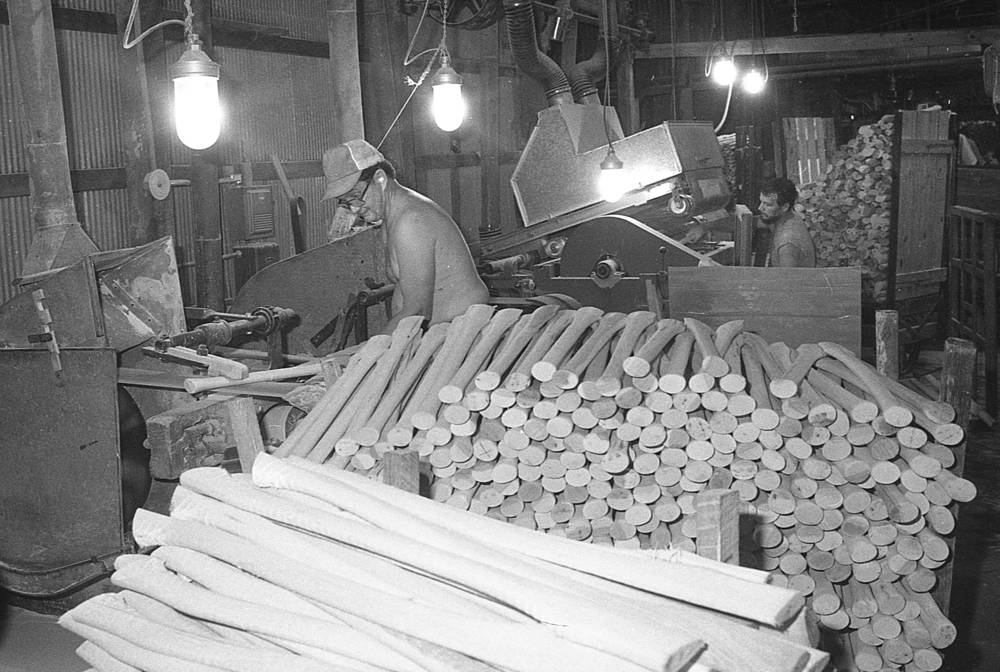 JACKSON - In Robert Frost's poem "The Axe Helve," the old French-Canadian woodsman, Baptiste, tries to explain to the poem's skeptical narrator that the craft of handle-making is not something to be taken lightly, that it's an almost supernatural kind of knowledge that can't be duplicated by automation.

Frost's poem was written in the early 1920s, and although he undoubtedly didn't have M.G. LaPierre in mind when he wrote the poem, Baptiste and his philosophy of handle-making are certainly representative of LaPierre's thinking on the same matter when he founded the LaPierre-Sawyer Handle Co. here in 1902.

And it has been that continued reliance on personal craftsmanship which has won for LaPierre-Sawyer handles their reputation as being among the finest quality handles in the world for the past 83 years, notes Ron Keathley, of the IXL Manufacturing Group, which now owns and operates the LaPierre-Sawyer Handle Co.

"Quality in manufacturing has always been the main goal of LaPierre-Sawyer and it has given them the reputation of being the 'Cadillac' of the industry," proclaims Keathley.

"A LaPierre-Sawyer handle costs a little more than other handles," he conceded, "but our customers are willing to pay that amount extra because they know they're buying the best handle made."

The idea of the LaPierre-Sawyer Co. originated with LaPierre as he traveled throughout Southeast Missouri and Arkansas in the early 20th century as a grocery salesman, according to the company's history file.

LaPierre, who sold some hickory handles as a part of his job, noticed that there was a great demand for these quality handles. At the time nearly each community had its own small handle factory, but the handles being produced in these simple plants were of varying kinds of wood quality.

So, LaPierre and C.A. Sawyer, a businessman from Little Rock, Arkansas, decided to establish a handle manufacturing business near an area that would offer a good supply of hickory and steam power and would also be near their potential customers. The spot chosen was at the site of an old stave mill and a lime kiln on the bank of Goose Creek in Jackson, where the factory continues operations today.

LaPierre and his brothers were the driving force behind the company for most of its early years, which were highlighted by the company's handles winning a Gold Medal Award at the St. Louis World's Fair in 1904.

"It was from that gold medal that the company derived its name for its finest grade of handle, 'The Gold Seal,'" Keathley explained.

LaPierre served as president of the company until his death in 1949. Then his son, Guild LaPierre, who had been with the company for over 30 years, immediately took over its management. However, he died just three weeks after his father.

Tom LaPierre, youngest son of the founder, then took over the task of running the company and is credited with modernizing the business, although the machinery used today in the plant is essentially the same machinery used in the 1920s, stressed Keathley.

"That's one thing about this business...it really can't be automated," he noted. "It's still the skills of our craftsmen and the eyes and knowledge of our wood graders that make us or break us."

All the handles made at LaPierre-Sawyer are still made out of hickory. Keathley pointed out that the primary reason for this is that hickory is the hardest type of wood. "Also, it dries very dry, it doesn't bow, and it's highly resistant to shock," he added.

The IXL Group, headquartered in Bernie, Missouri, owns nine manufacturing facilities located in Missouri, Arkansas, Tennessee and Canada. It is the second-largest replacement handle manufacturing company in the United States, and it's estimated that 85 to 90 percent of all replacement tool handles sold in this country are manufactured by the three largest companies, Keathley observed.

In addition to the company's national market, LaPierre-Sawyer handles are sold throughout Europe, South Africa, the Far East and Canada, but Keathley concedes the foreign market is down due to the strength of the dollar and our country's high interest rates.

"But we're looking for things to pick up," he predicted. "We're going to start a new marketing and sales campaign soon to try to increase our share of the market here and abroad.

"We're also breaking into the DIY (do-it-yourself) market. We realize that a lot of people out there aren't aware that you can buy and install a new handle when an old handle breaks instead of having to purchase a new hammer or axe or whatever."

The company currently transports between 3,000 and 5,000 tool handles daily from its plant. The company's quick response time to orders has always been one of its strengths in recent years.

"We package our own product, so when an order is placed we can usually have it on the road the next day," Keathley noted. "Our competition sometimes takes a week or two to fill an order before shipping it out."

The company presently employs 21 area residents, most of them have been cross-trained to do at least two or three jobs in the plant.

"And we sincerely feel it's our people that are the key to our success," Keathley stressed. "And we're well aware that a lot of these people when they leave are going to be hard to replace."

Why is that? "Because it's not like losing a machine where all you need to do is replace a part of re-program the computer," the company official explained. "What many of these people know is irreplaceable knowledge."