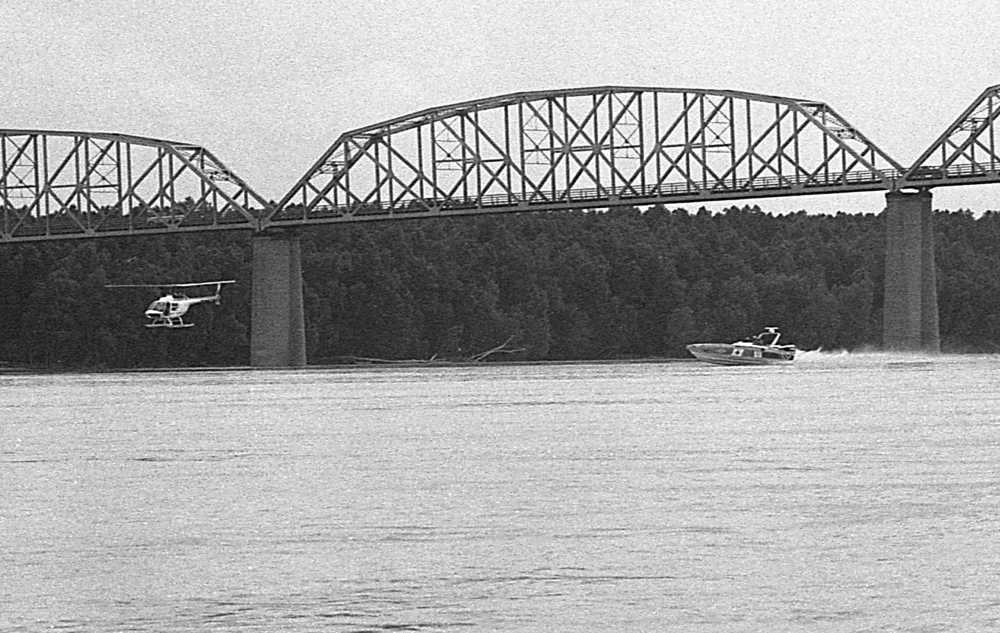 With a helicopter for an escort, Michael Reagan's speedboat blazes by Cape Girardeau enroute to setting a new upriver speed record between New Orleans and St. Louis. The helicopter flew ahead of Reagan's boat to locate logs and other river debris that could cause damage to the boat. Traveling at about 55 miles per hour, Reagan and the helicopter whizzed under the Mississippi River bridge here at about 2:15 p.m. Thursday. (Fred Lynch photo)

ST. LOUIS (AP) --Despite dangerously high water and treacherous driftwood, Michael Reagan shaved an hour and 39 minutes off the speedboat record for the 1,027-mile run from New Orleans Thursday.

"There are a lot of logs in that Mississippi," Reagan said before joining his father, the president, at a $250-a-plate fundraising banquet for the U.S. Olympic Committee.

"I had to make a choice between hitting the 10-inch logs or the four-inch ones," he said. "And when I made the wrong choice, it broke the motor casing and blew the engine."

The 38-foot racing hull limped across the Iron Street finish line at about 55 mph on two of its three engines after cracking the casing of one on a log about 12 miles south of St. Louis. Two other engines were repaired en route.

Reagan, 37, said he asked his father to order agents off the trip because he didn't want to have to face the question of how much the government paid to protect him on the river.

Until sundown, the boat made good time. Then it got hairy.

At one fueling stop, gasoline spilled into the boat and the crew decided not to turn on the generator which powered their floodlights.

"We couldn't see anything for about an hour," said Reagan. "It was pitch black. Mike had radar, and I watched his hand signals as we ducked logs at 60-65 mph. During that hour, we passed 23 boats.

"No one got tired," he added. "Those logs are coming so quick at 88 feet per second that you don't want to take your eyes off them."

The race from New Orleans to St. Louis is known as "The Assault on the Mississippi." According to the American Power Boat Association, the current record of 12:40:50 was set on Sept. 22, 1990 by Howard Arneson. He was piloting a turbine-powered 32-foot Skater catamaran.