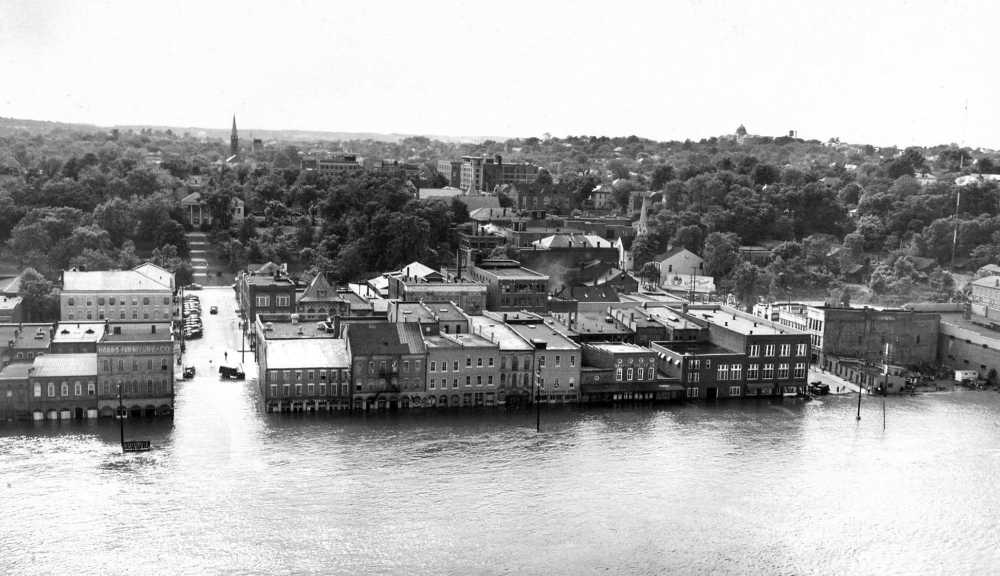 The Mississippi River today set an all-time high record at Cape Girardeau. With a stage at 8 a.m. of 42.3 feet, the river, in its worst flood in these parts in all recorded history, had exceeded the almost legendary 99-year-old mark of 42.19 feet set on July 4, 1844.

The weather bureau, in a report to Port Warden Lee L. Albert, said the crest of the flood should be reached at 42.5 feet.

Unpredictable as ever, the mighty Mississippi threw its greatest fury at Cape Girardeau last night when in the bare space of six hours, it jumped one foot creating a near panic among worn out levee workers at the industrial plants and bringing out hundreds of civilians and soldiers to aid in the battle.

The sudden rise, veteran observers said today, was occasioned by the blasting of the southern Illinois levee near Gale, which permitted the pent up flood waters in that basin to reach the main channel. The effect was to retard the flow of the water in the channel, causing it to clog up along the Cape Girardeau river front. Some observers in the vicinity of the cement plant declared that the current actually was running crosswise of the stream, so great was the pressure as the Illinois water was released.

U.S. Engineers, keeping a constant check on the stream during the afternoon and night, reported that the Mississippi officially broke the all-time record mark at 2:30 o'clock this morning when it reached a stage of 42.2 feet. By 4:30 it had reached 42.25 feet.

In reaching the history-making mark, the mighty stream late Wednesday afternoon claimed three lives in this section, and by night fall had reduced to nothing every levee but one between Cape Girardeau and St. Louis. Victor Clovis, 60, a government river gauge reader at Fort Gage, seven miles north of Chester on the Illinois side, and his sons, Gordon, 31, and Marion, 12, were drowned when their boat was swept against a tree and capsized. The bodies had not been recovered today, Engineers said.

There's but one levee, functioning, left between here and St. Louis, that at Kaskaskia Island, which protects about 12 square miles of land. All others have been overrun by the rampaging river.

The great rise in the stream also followed the dynamiting of the Perry County levee south of Claryville and the letting out of impounded water which had risen four feet above the level of the river on the outside of the dikes at the lower end of the Bois Brule bottoms basin. This levee was opened about noon Wednesday.

An additional great volume of water was released south of Cape Girardeau when the Alexander County, Ill., levee was dynamited about two miles south of the traffic bridge. Later in the night the levee was again blown near Gale, Ill., this time apparently by unknown persons.

The levee was blown in the afternoon while officers from Harris Field looked on as official representatives of the Army. The explosion opened a crevasse about 100 feet wide, and it was said the one set off later created a similar breach.

In Cape Girardeau the flood caused the greatest damage a flood has ever caused. The rapidly rising water forced the evacuation of more stores on the Main street business block between Independence and Themis streets.

All Cape Girardeau was placed on the alert early in the night when Missouri Utilities Co. officials asked the people to be prepared at a moment's notice to accept the discontinuance of electric, gas and water service. Between 200 and 300 men piled sandbags there and a similar number worked at the cement plant. Today with the river's stage at an all-time mark and apparently at a standstill, the battle against overwhelming odds appeared to have been all but won. Electric service was discontinued for one hour, beginning at 4 o'clock this morning, but was restored when bigger pumps were put into operation at the plant.

How High It Is

Cape Girardeau ordinarily thinks of its river as high. A stage of 35 feet is necessary to put the water on the railroad tracks on Water street at Themis street. Today there is seven feet of water at that intersection and around eight feet at the Water-Independence streets intersection. Water is almost half-way up on the Frisco passenger depot, and all but a small section of the Spanish street block between Independence and Merriwether streets is under water. The Merriwether street intersection is clear. Water has also run northward on Spanish street from the Independence street intersection for about 200 feet.

Houses in many parts of Smelterville suburb were torn from their foundations during the night and some of them are floating. Others, more securely anchored, are completely under water. Water has gone over the roofs of a few of them.

The river forced the government to put up a new gauge today, and it was placed on Themis street, on the south side of the Building & Loan Building. The old stationary gauge is now far out in the river at the wharf near Themis street.

Several inches of water was in the Synagogue on South Main street today, water going in early last night. The wooden floor and other parts of the building probably will be ruined, it was said. The building was located on ground so as to be 12 inches higher than the 1927 flood, it being considered then that that would be a safe level.

In a previous blog with links to more river photos, photographer Garland D. Fronagarger talks about the frequent Mississippi River floods in Cape Girardeau in an audio slideshow: