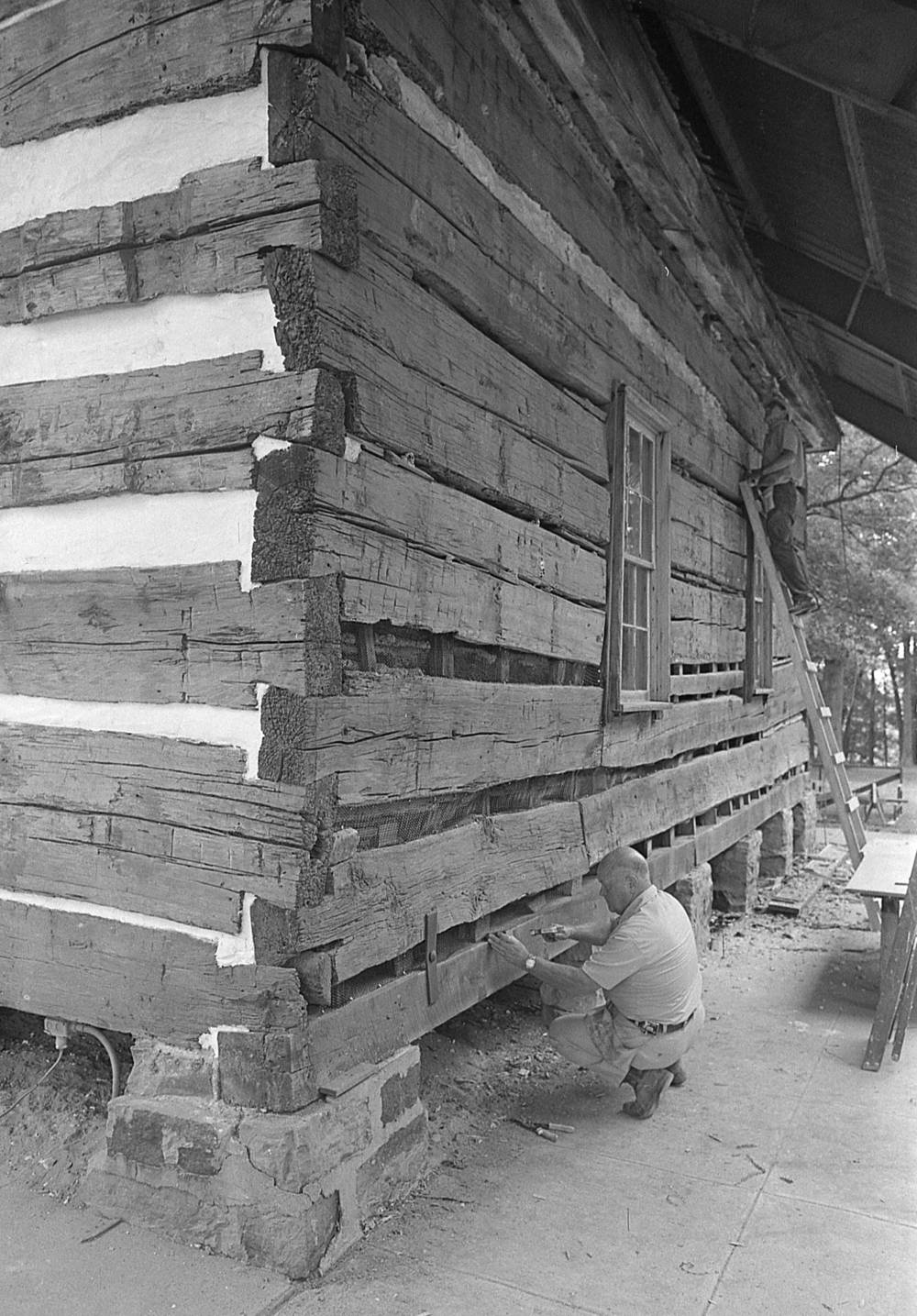 Above: Reginald Gerhardt, left, of Old Appleton, nails metal lath between logs as Ed Hahn of Jackson removes old mortar on Old McKendree Chapel during restoration work. Below: Robert Kasten of Cape Girardeau sweeps up debris after the workers completed the north wall of the old shrine. Bottom: Weatherboarding is shown above the entrance to Old McKendree Chapel. (Fred Lynch photos) 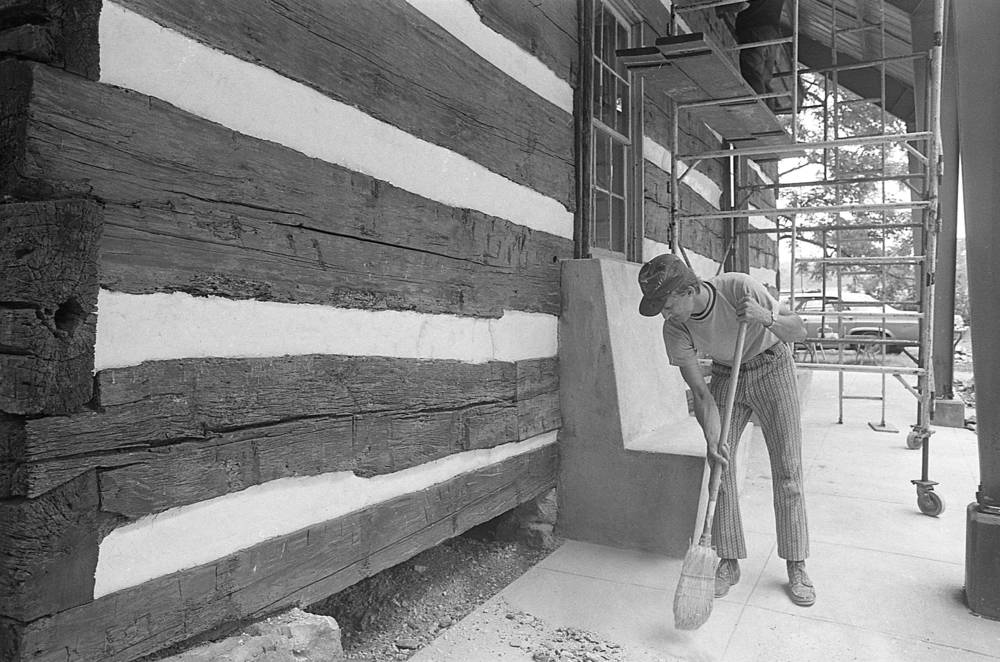 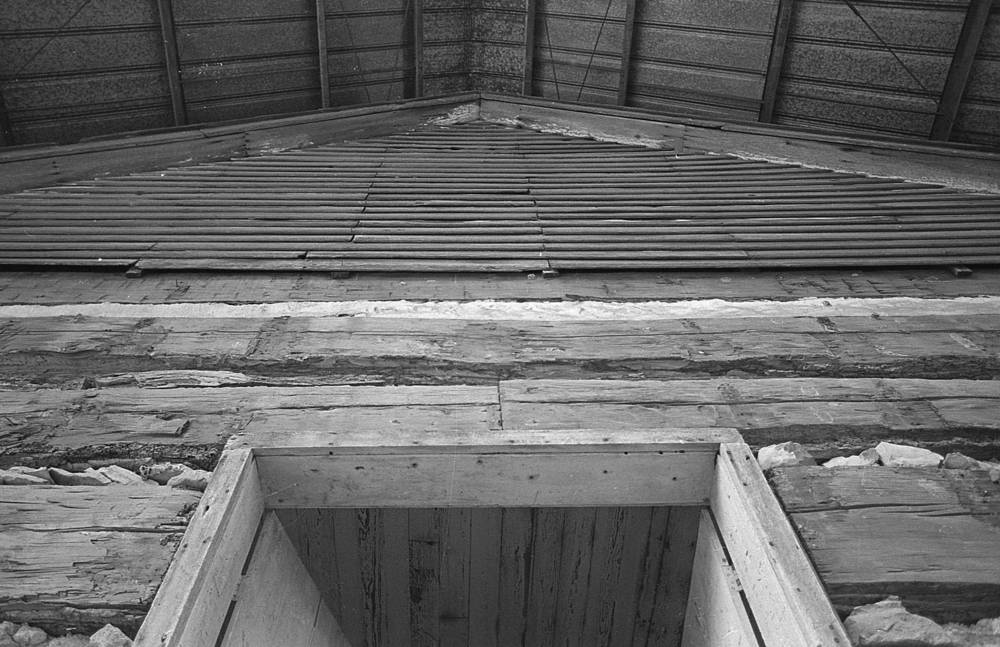 "A storm of protest not only among adherents of Methodism, but among others who wish to see things of this nature piously preserved, arose today."

This report appeared in the May 27, 1927, issue of The Southeast Missourian concerning the renovation of Old McKendree Chapel. For the past two weeks, restoration work of a "drastic" nature is progressing out at Old McKendree, with the blessing of the board of trustees and area Methodists.

According to J.W. Gerhardt, who is directing the reconstruction work, the building would have been destroyed in a matter of months by termites if the old logs and caulking had not been torn down and replaced, now.

The Rev. Jeff Marsh, district superintendent of the Cape Girardeau-Farmington area, one of the five members on the board, directed a tour of the renovation site Monday afternoon.

Mr. Marsh said that after two years of careful planning, it was decided in early May to begin the work.

The weatherboarding over which the "storm of protest" had arose in 1927, was torn down last week, only to reveal that most of the original logs were infested with termites and were rotten.

Mr. Gerhardt said he was aware of the board's desire to restore the shrine to its original state. He found a neighbor who lives near Old McKendree on the Bainbridge Road, who offered old logs from a torn down house that match the original logs much as if they had come from the same grove of trees, "which they most likely did."

The north side of the building is completed, with concrete buttresses reinforcing the walls, with an added feature of seats made from the buttresses. New caulking has replaced the old, which has been chipped out and removed, and "the building will be as sound and rigid as it was when the first settlers built the church," Mr. Gerhardt said.

Workers, including two of Mr. Gerhardt's sons, said they are impressed with the fine hewing of the logs with the broad axes the early churchgoers must have used to erect the building. The joints for the logs to fit into were even and fit closely, and the pegs and square-head nails were fashioned with care, they said.

Plans for more work other than the immediate building have been made and will be completed before the Sept. 11 Old McKendree Day, which this year will include a District Rally day to celebrate the renovation work.

Permanent restrooms and a covered pavilion will be built towards the back of the yard area and will be an asset for tours and all-day meetings, Mr. Marsh said. And, since more brides are looking for a "different, nostalgic place for their weddings, Old McKendree will lend itself to this."

Also, Plexiglass display cases are to be built inside the church, on either side of the doors to house historical items of interest to the church and pictures.

Since the conference yearly allocation for upkeep on the building is not adequate for restoration purposes, the Association for Old McKendree must finance the larger part of the work, assisted by the district, Mr. Marsh said.

Sylvester Nothdurft is chairman of the Board of Trustees presently; Arthur Mattingly is vice chairman, Leonard Peerman is secretary and John Hale is treasurer.

Arthur Deneke, one of the original members of the Association Board, is on the restoration committee, along with Shelby Brown. Mr. Mattingly, Paul Lassater and Mr. Marsh are the other members.

The old chapel was built during 1819 and was completed prior to Sept. 14 of that year. Mr. March said he plans for the district members and all others interested in Old McKendree to see a completed replica of the 1819 building on Sept. 11.

The fourth Sunday in September is the day of the annual meeting of the Board of Trustees of Old McKendree Chapel. There is outdoor preaching and a celebration at 3:00 p.m.