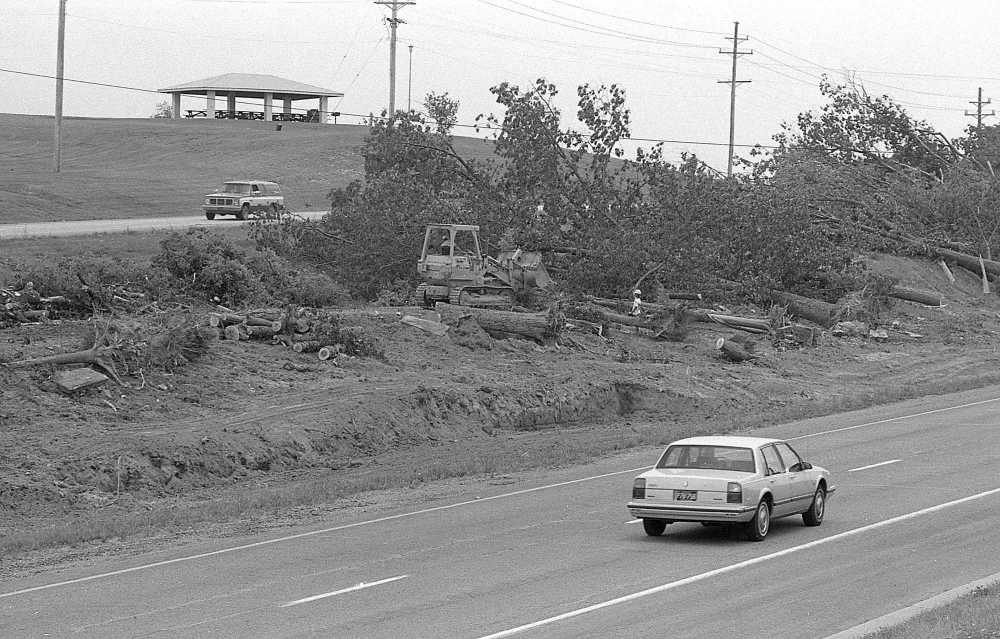 A bulldozer continues clearing trees Monday at Wedekind Roadside Park, situated between the northbound and southbound lanes of Highway 61 between Cape Girardeau and Jackson. The project will alter the entrance to the Missouri Veterans Home and will turn the park into a highway median. MidAmerica Hotels Corp. is financing the project. It received a permit from the Missouri Highway and Transportation Department to bulldoze the trees. (Fred Lynch photo)

Wedekind Park a victim of progress

A historic, wooded park between Cape Girardeau and Jackson seems destined to become another stretch of highway median.

The trees at the Wedekind Roadside Park on Highway 61 North near Interstate 55 have been taken down in order to provide a new entrance for the Missouri Veterans Home and for future developments at the location.

In addition, some site improvements will be done, including cutting down the hill in front of the veterans home to make the facility visible from Highway 61. About 100,000 cubic feet of dirt will be moved.

The project is being completed and financed by MidAmerica Hotels, Inc.

Dan Drury, vice president of operations for MidAmerica Hotels, Inc., said, "Overall, you will see a safer traffic area than you ever have seen before there.

"Our property is there also," Drury said. "This will benefit both of us."

MidAmerica Hotels Corp. owns the property on all four corners at that I-55 intersection.

Drury said a hotel is planned for that location "some day." "It is in an overall master plan for that area. But we are not acting upon it immediately," he said.

"Also, there is a bad visibility problem with the oncoming traffic at that crossover," Drury said.

The company proposed the project to the highway department.

Mike Perry, maintenance and traffic engineer with the Missouri State Highway and Transportation Department, said the state issued a permit allowing MidAmerica Hotels Corp. to do the work.

Perry agreed with Drury that visibility was poor at that location. "That should be improved by this project," Perry said.

But he added the highway department will be looking into how many trees were cut down, and how to possibly replace them in a nearby area.

"It's possible we got a little carried away," he said. "We're coming down there in the next week to look at it."

The park lies between the northbound and southbound lanes of Highway 61, near I-55.

The park was part of the beautification plan that resulted in the Ten-Mile Garden between Cape Girardeau and Jackson. According to a May 2, 1939 news story in the Southeast Missourian, the plan "provided ovens, stonework and other equipment for an unusually inviting roadside parklet."

Louisa Wedekind was quoted in the newspaper article as saying that "she desired to give its use to the people forever."

Perry added, "What was the park will be consumed in this improvement. This really hasn't been an official roadside park for several years. The main thing it has been used for is commuter parking.

"What's left will be hard to call much of a park," he added. "I'm sure some trees or smaller shrubs will be planted in there."

A historical marker at the park will be relocated, but Perry said the new location has not been determined.

He said that statewide, the highway department has a policy to replant two seedlings for every tree cut because of construction work.

"We will try to get as many trees planted there as possible."

Drury said he has been told that the trees would not have survived the changes.

"When you put any kind of fill, six or more inches, around a tree root system, the tree will eventually die," Drury said.

"For every tree we ever knock down, we plant back about a hundred," Drury said. "Look around the Holiday Inn and Burger King. We are very much in tune to the environment and planting of trees. We have a full-time staff that just takes care of the horticulture.

"The highway department felt there were good enough reasons to fill in those areas and smooth out that intersection," Drury said.

"This paves the way to progress. None of this is at any cost to the county or state.

"This is just to have a better line of sight for entrances and exits and crossways and to fill in some very low areas," he said.

Cape Girardeau County Presiding Commissioner Gene Huckstep said commission members had received several calls concerning the trees, but he said the county government is not involved in this project.

"People don't like to see trees coming down," Huckstep said. "We've come under some concern with people thinking it was the county doing this.

"Once we donated the land (for the veterans home) we were totally out of the picture," Huckstep said.

He said about five or six years ago, there was discussion about the present entrance to the veterans home and the possibility of moving the entrance, but he said the county commission was not involved in planning the project under way now.

"Undoubtedly the state owns that ground and can do anything they want," Huckstep said. "And we feel like we have a beautiful park space just a couple hundred feet away.

"If the intersection is going in there, it would be hard to go around the trees. But I was a little surprised. Those trees have been there an awful long time."