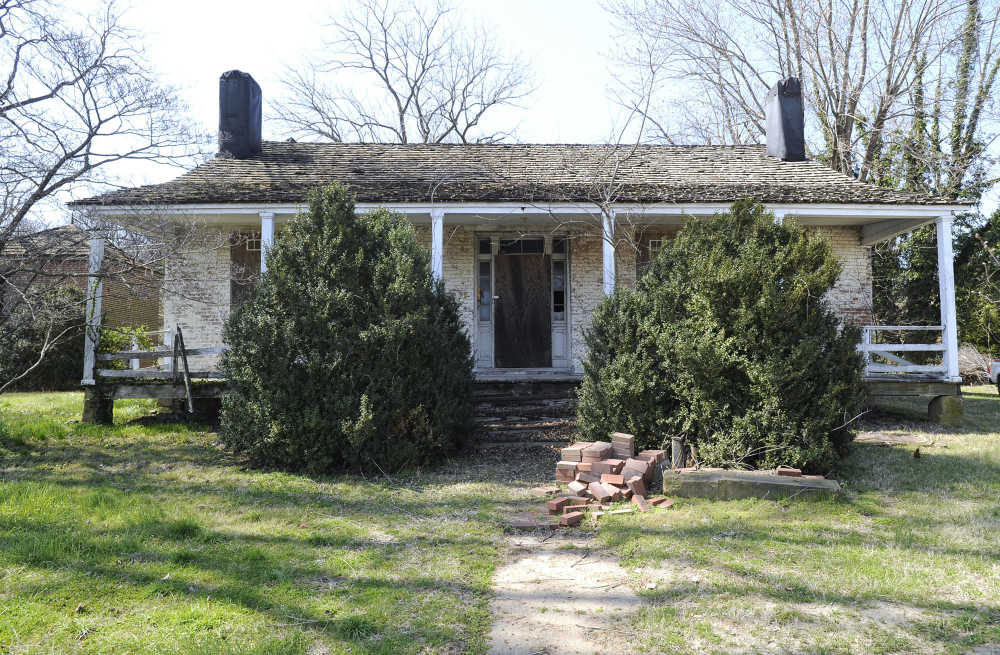 It came close to being torn down and being used as a parking lot, but thanks to the efforts of the Historical Association of Greater Cape Girardeau, the 125-year-old Reynolds House on North Main street has been spared demolition and will be renovated in much the same fashion as the Glenn House here has been.

Final arrangements for acquiring the property at 623 North Main street were completed Wednesday, according to Mrs. Mary Helen Flentge, president of the local historical group.

"We're so thrilled to have it," commented Mrs. Flentge, who said the historical association has been attempting to acquire the property for more than a year and a half.

The one and one-half story brick house, built in 1857, was deeded to the association Wednesday by Mr. and Mrs. Burton J. Gerhardt and their children, Tom H. Gerhardt and Mrs. Loy Welker. The Gerhardt family acquired the real estate earlier Wednesday from Mrs. Ruth Steinhoff of Overland whose family had owned the property for many years.

The historical group became interested in purchasing the Reynolds House after it was learned the property was to be sold.

"We heard it was up for sale and that somebody wanted to buy it, tear the house down, and put up a parking lot on the property," Mrs. Flentge recalled.

Mrs. Flentge appointed a committee consisting of Mrs. Phil Kearney, Ted Hoerner, Mrs. L.S. Bunch, Paul Griffith, Dr. H.O. Grauel and Tom H. Gerhardt which recommended to the association's board of directors that the association attempt to purchase the property to save it from demolition.

At one point last year, the City of Cape Girardeau initiated condemnation proceedings against the property. However, the city delayed the process in light of the historical association's effort to acquire and renovate the house.

The original owner of the house, James Reynolds, came to Cape Girardeau with his wife, Christine Catherine Reynolds, in 1852 from St. Louis. In Cape Girardeau, Reynolds became associated with Robert Sturdivant and B.M. Horrell in the operation of the first steam flour mill in this area. This mill was a log structure that extended out over the Mississippi River just north of Broadway.

In 1857, Joseph Lansmon, who was a brick mason on many early structures in Cape Girardeau, including St. Mary Cathedral and the Common Pleas Courthouse, built the Reynolds House according to plans drawn by Edwin Branch Deane, the same architect who designed the Glenn House and several other large residences in the city.

Lansmon also built a mill for Reynolds which was regarded as one of the community's first important manufacturing concerns. The six-story mill contained 494,000 bricks and stood until the late 1950s.

Fifty-one thousand bricks were used in the Reynolds House which was constructed with brick partitions. The total cost of the brickwork in the residence was $475.

In August of 1912, gold and silver that Reynolds buried on the property during the Civil War was found by two of his daughters, Miss Julia Reynolds and Mrs. E.B. Grumm.

Although there are several structures in Cape Girardeau build before the Reynolds House, the house is one of the earliest dwellings that has not been altered to any extent. "It is a rather unique house because of that," Mrs. Flentge said.

Significant architectural features of the Reynolds House include nine-light over six-light windows that cannot be found in the city today; entry doors that contain six panels in the cross design, the front one being surrounded by a transom and sidelights; carved mantels in the two front rooms, diagonal mantels in two others; and a kitchen fireplace that was once used for cooking.

The house has five rooms, a large central hallway, and a room in the half story that extends above the front wing. There are two deep cellar rooms paved with brick under the house. five chimneys, a long front porch covered by a low roof, and simple porch railings adorn the house's exterior and a fort-like smokehouse remains on the grounds.

One of the first improvements the historical association plans to make on the property is the installation of a new roof. "We will probably have to raise some money for the roof," Mrs. Flentge said.

"We wish to make a historical home of it and bring tourists through it as we have the Glenn House," Mrs. Flentge noted.

The Reynolds House was added to the National Register of Historic Places in 1983. The City of Cape Girardeau designated the structure as a local historic landmark in 1996.

As reported in the Nov. 14, 2011 Southeast Missourian, the historical association was constrained in its preservation efforts by a lack of funding, so the house was mothballed in 1999. When Earl Norman and his wife heard that the historical group was planning to sell it in 2009, they decided to buy it. They had made an anonymous donation in 2008 to have the roof replaced and floor joists repaired and wanted to see the home preserved.

The building has been on the Cape Girardeau Historic Preservation Commission's endangered buildings watch list since 2014. A private foundation, including Norman and Steven Hoffman, coordinator of Southeast Missouri State University's historic preservation program, was established several years ago to help preserve the structure. Isle Casino Cape Girardeau, just down the street, is represented on the foundation. The casino owns property next to the home and has helped to maintain the grounds.

Group hopes to renovate historic Reynolds House; it is on endangered buildings list

View more photos in this gallery by Laura Simon: