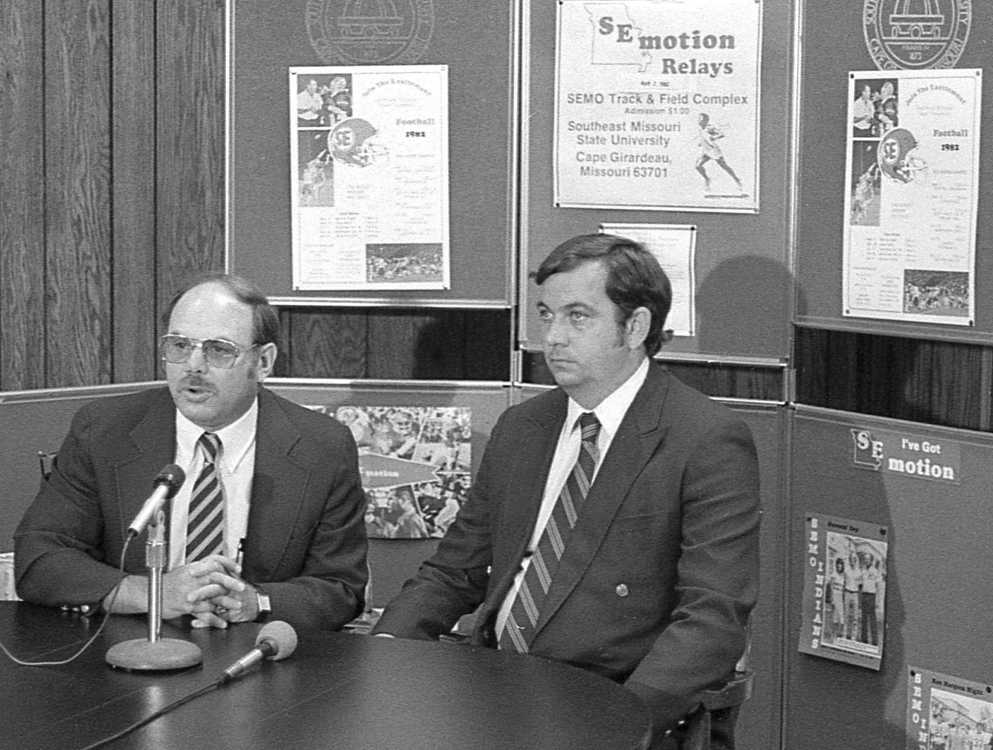 There were three reasons why Joey Haines was selected from a field of 40 applicants to be Southeast Missouri State's new track coach, athletic director Marvin Rosengarten said.

"The committee felt, first off, that we wanted a solid citizen, a solid person," Rosengarten said as the former Austin Peay mentor was introduced at a press conference on Thursday. "We wanted someone to add stability to our program. We've had two changes in the past two years.

"Also, they felt what he did with the AIAW (Association for Intercollegiate Athletics for Women) meet was impressive. And thirdly, he has had success in sprints and relays. Coaching is getting so complicated that sometimes you forget the main reason you hire a coach in the first place. He's very proven in the sprints and has had a lot of success in that area."

Haines, 36, takes over after Kevin White, who served as head track coach this past year, accepted a position with Loras College in Dubuque, Iowa this spring. Haines, who coached at Austin Peay for the past four seasons, said he was impressed with the organizational capabilities and track facilities of the university.

"We came up for the SEmotion Relays with Austin Peay, and I was really impressed with the meet," he said. I was impressed that a meet of that caliber grew so much in its first year."

Haines will now be the SEmotion Relays director, as well as the assistant athletic director. With SEMO "99 percent" sure of hosting the NCAA Division II National Championships in the spring of 1983, Rosengarten said it was important that the new track coach be able "to roll up his sleeves and get the work done."

In his last year at Austin Peay, Haines was the host coach for the AIAW Nationals. Rosengarten said the budget submitted by SEMO State for the national meet has been approved and now the university must get the go-ahead from the NCAA Rules Committee.

"We had good facilities where I was, but we shared them with football," Haines said. "Now, I don't have to worry about dodging footballs and linebackers."

Work on the facility, located on North Sprigg Street, is not yet complete, Rosengarten said. With the addition of a press box, more stands and improved gate access, the complex will be "90 percent of what we want." He added funding for those projects has been approved.

Even though White departed early in May, with his decision to leave coming even while he was with the Indians at the Division II Nationals in Sacramento, California, Haines said he expects athletes who signed to come to SEMO State next year to still do so.

"Things have been going on as normal, even though we had no head track coach," he said. "It appears we haven't lost anybody who signed."

Haines said assistant track coaches Fred Binggeli and Tim Rademaker did a good job holding things together while the university sought a replacement for White.

The SEmotion Relays was renamed the Joey Haines Invitational: