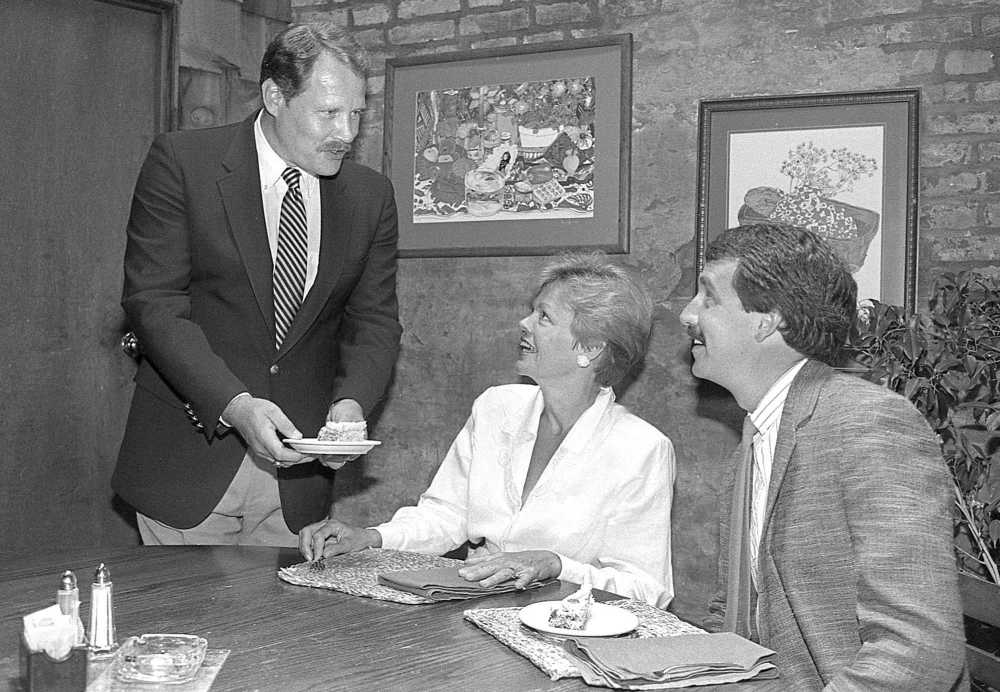 Tom Harte, left, serves Lauchette Low and David K. McKinney some of his cheesecake at Jeremiah's Restaurant. Harte, a college professor who likes to cook, will provide the restaurant with one of his dessert specialties, cheesecake, as a part-time business. (Fred Lynch photo)

This SEMO college professor is a chef

Tom Harte is a college professor who believes that man shall not live by bread alone.

The proof is in the pudding--literally.

In this case the "pudding" is cheesecake which is being served at Jeremiah's Restaurant in downtown Cape Girardeau.

Harte's fancy desserts have long been the envy of his friends and neighbors.

Dr. Harte's cooking career dates back to the early years of his marriage to the former Jane Feldmeier.

"She (Jane) was working to help get me through college," said Harte. "One Christmas, I decided to make holiday cookies. They turned out pretty good, and I was hooked on cooking."

"This is something we've all talked about and Lauchette made the arrangements with Jeremiah's, and here we are," said Harte, a professor of speech communication and theater at SEMO University.

"It's unbelievable that Cape Girardeau has such a fine chef as Thomas Harte," said David K. McKinney, a partner in the Jeremiah's operation. "Lauchette had told me about his cooking, but it wasn't until I sampled some of Harte's desserts that I realized what we had here.

The cheesecake is just a start.

"He has many desserts," said McKinney. "He has more than 20 varieties of truffles. And, he has a chocolate-orange cake specialty."

Harte, who by his own admission likes to eat, says his fondness for desserts come from his young home life.

"A meal wasn't a meal until we had dessert," said Harte. "My mother--Ethel Harte, who now lives in St. Louis--is an excellent cook, and she loves making desserts."

Harte often prepares entire meals for his family and guests, but it's the desserts that he specializes in.

"Jane is an excellent cook, too," said Harte. "We often cook together.

"This is an exciting venture for me," said Harte. "Nothing ventured, nothing gained, they say. This could lead to bigger things."

Harte's dessert cookery talents are known nationally. One of his recipes, for Mexican Chocolate Souffle, appeared in a recent issue of "Chocolatier," a national, bi-monthly magazine featuring chocolate desserts.

Harte is not a Cape Girardeau native, but he calls it home. He attended college here before completing work towards his Ph.D. at the University of Illinois. He returned here in 1966, joining the SEMO University speech department.

Read more about him in this story by the Southeast Arrow: