'A Day in the Life of Cape Girardeau' 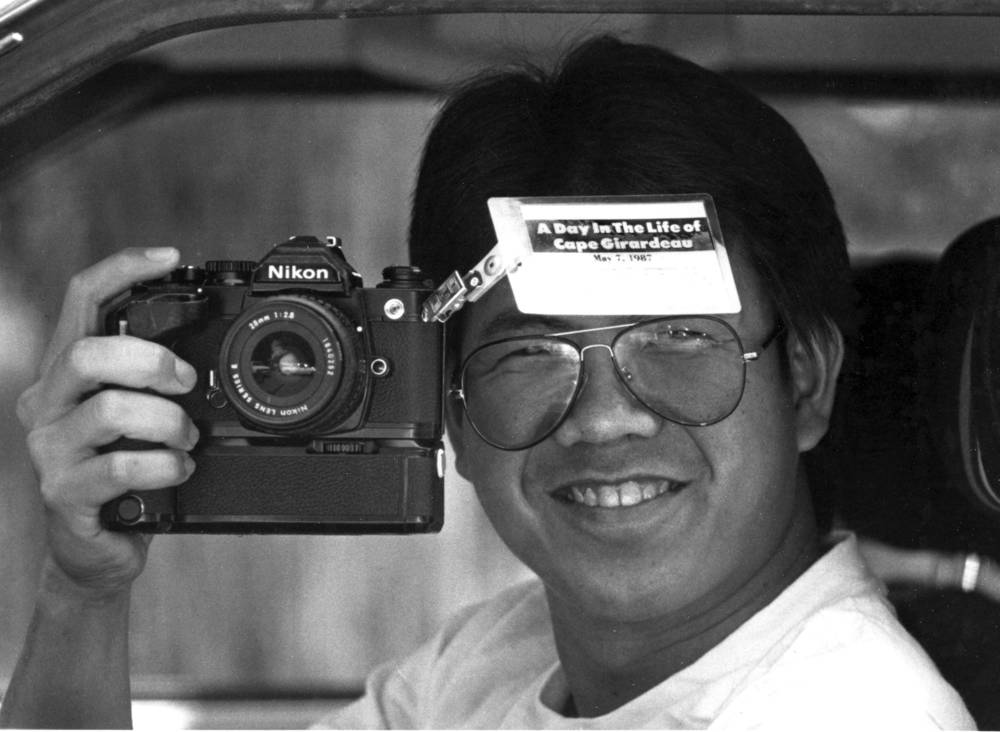 Niti Pratoomsindh hits the street with his camera for "A Day in the Life of Cape Girardeau." (Joel House photo)

More photographs from that day are below this introduction to a special photography section published June 28, 1987 in the Southeast Missourian:

A Day in the Life of Cape Girardeau

The individuals who make up the heart of the city are those who most often receive the least recognition. They are just regular people doing regular things which don't often make the news.

These people were the focus of a day-long photo essay chronicling "A Day in the Life of Cape Girardeau."

From midnight through midnight, photographers prowled the streets searching for people doing what they do every day--working, playing, talking and celebrating life.

On that Thursday, 20 local studio, news and freelance photographers participated. The project, sponsored by the Southeast Missourian Newspaper, is designed to give both citizens and the photographers of Cape Girardeau a chance to shine.

Cape Girardeau, located halfway between St. Louis and Memphis, is nestled along the Mississippi River. It's a place where agriculture, industry, retail sales and education are centered.

The community is known for its small-town atmosphere and big-city opportunities, both of which were captured on film during "A Day in the Life of Cape Girardeau."

The project, which was patterned after "A Day in the Life of America," was coordinated by Mark Sterkel, Missourian chief photographer.

Planning for the project took more than six months from inception through today.

Although planning for an undertaking like this is extensive, throughout the project Sterkel emphasized that each photographer be allowed to use their own creativity, to discover something about the city that is not often seen but is very real.

On May 7, photographers hit the streets armed with 120 rolls of color and black-and-white film. Nearly 2,500 images were made throughout the city.

As they trailed through the office, depositing film to be developed, each noted they had discovered something new about the city they hadn't noticed before. They also commented, with some degree of wonder, about the friendly, agreeable nature of the individuals they had photographed during the day.

Although the photographs were taken, the project was far from completed. Each of the rolls of film had to be developed and preliminary prints made.

Two jurors, James Finley, an Associated Press staff photographer from St. Louis, and Gary Kolb, an associate professor from SIU-Carbondale's Photography Department, selected 72 of the best for inclusion in this special section.

Many of the pictures included in this special section are also on display at SEMO University Museum through the first week of August. Admission is free.

"Each person brings something personal," said Sterkel. "By having different people, we have a variety of ways of looking at Cape.

"We had hoped to avoid posed, glittery photographs," he added. "They're not realistic and they don't show what Cape is all about." 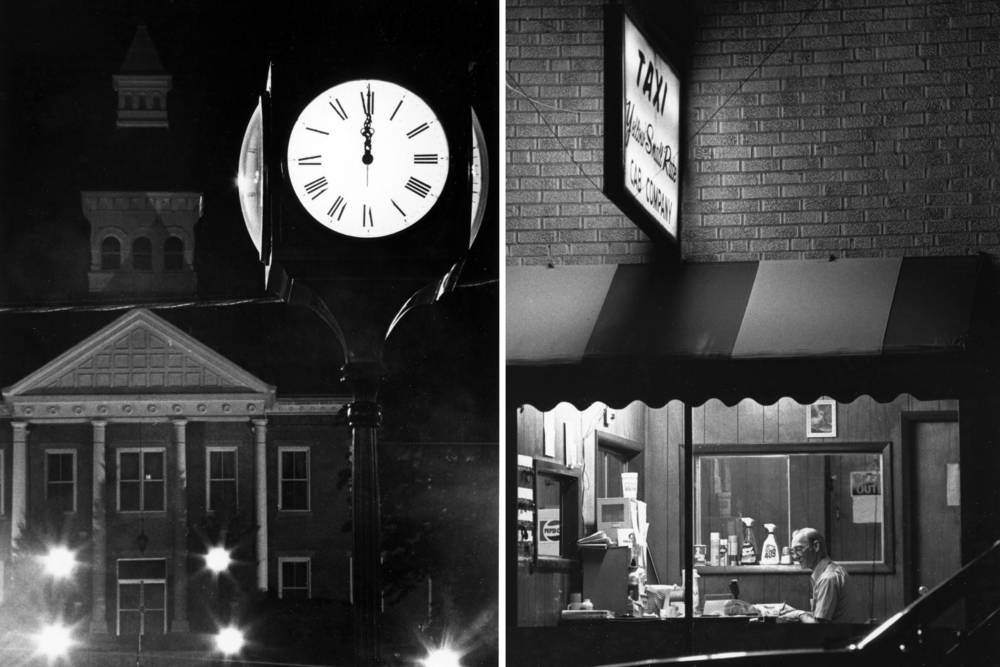 Left: A Day in the Life of Cape Girardeau begins at midnight, marked by the downtown clock at Main and Themis. Right: A dispatcher at Yellow Cab Co. waits for calls at 12:30 a.m. (Fred Lynch photos) 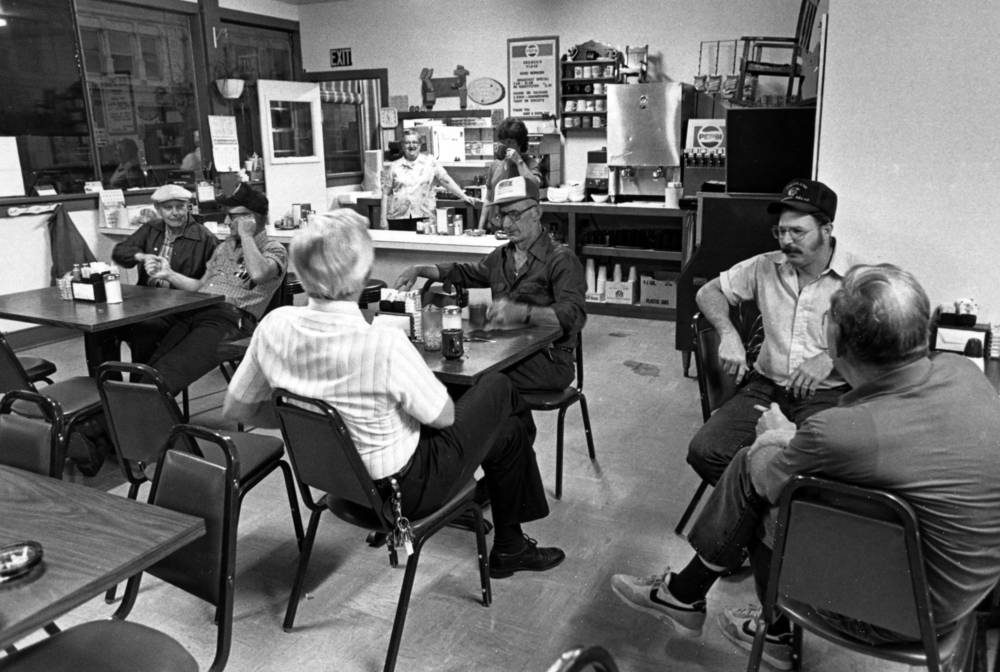 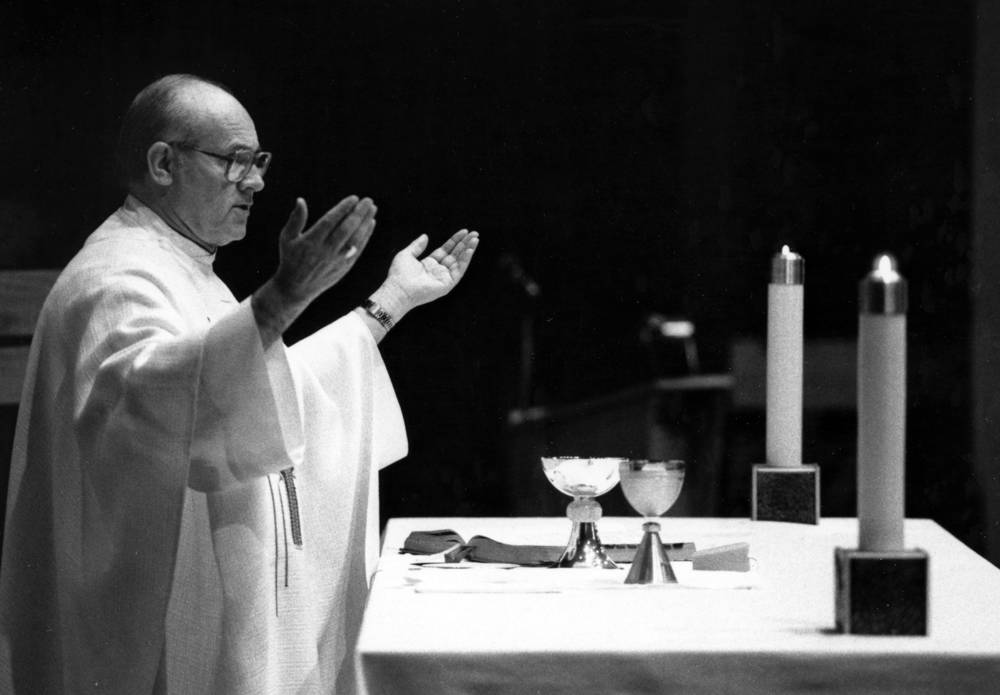 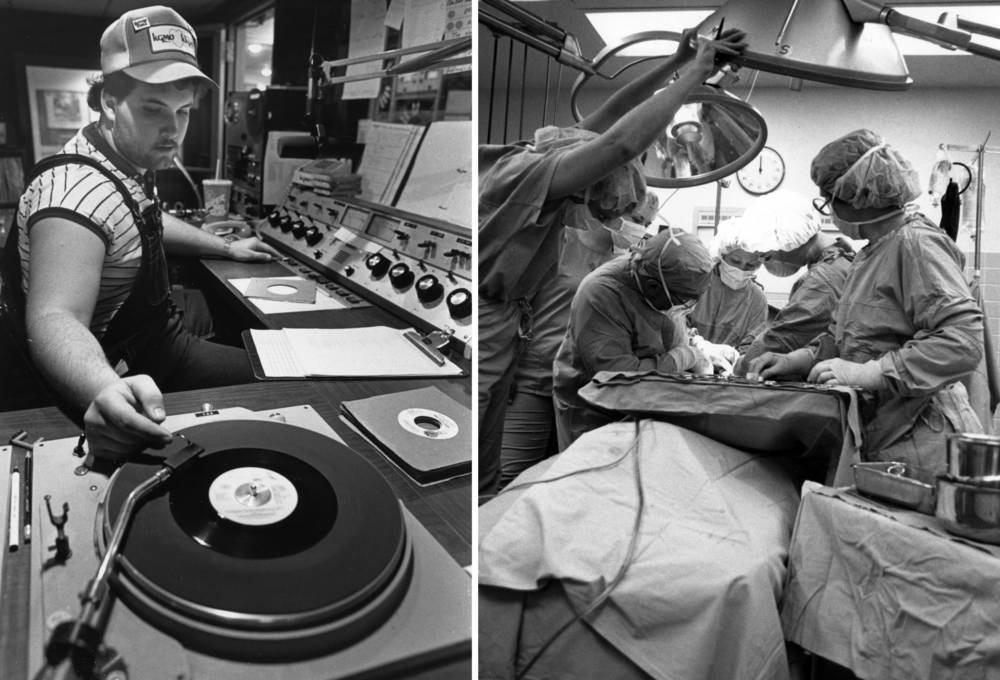 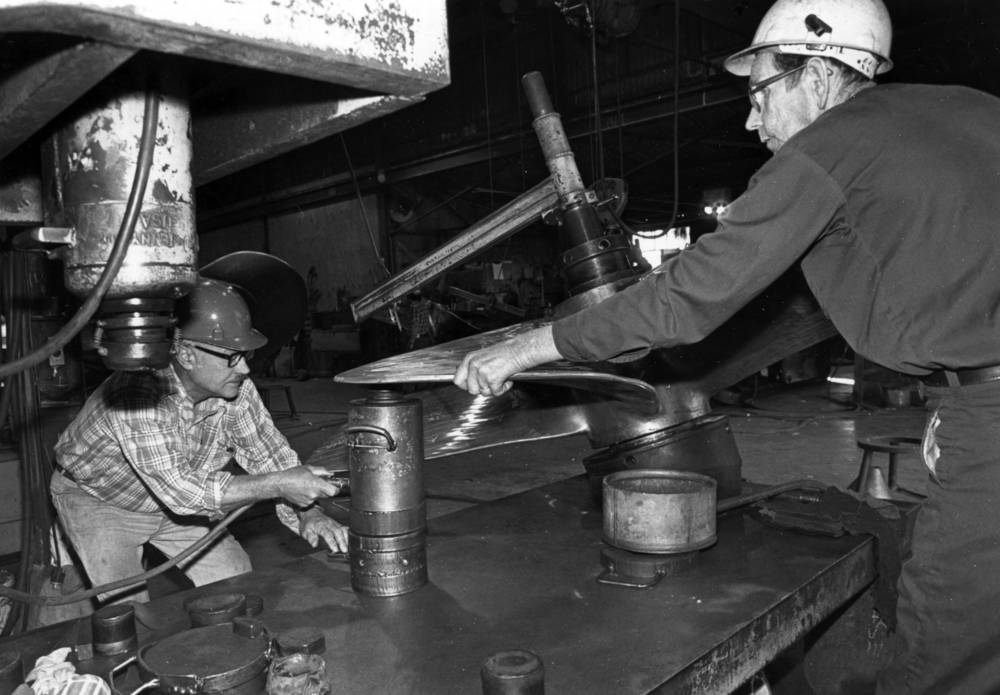 At 7:15 a.m., Lester Fornkohl and Myrl Fowler work on a new propellor blade for a riverboat at Missouri Dry Dock and Repair Co. (Bob Pollack photo) 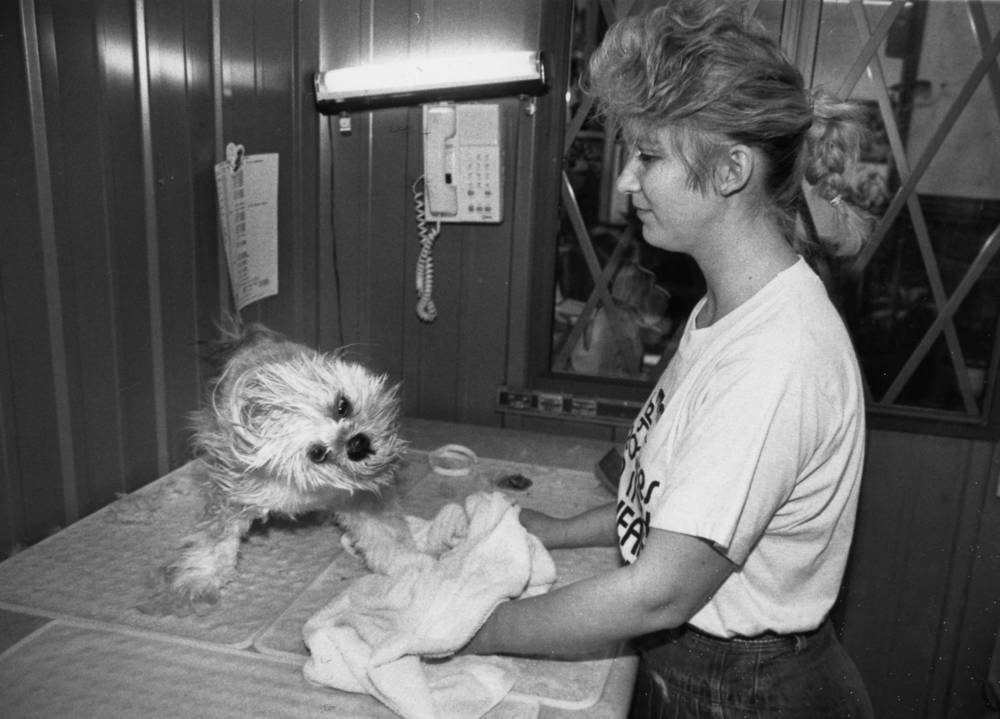 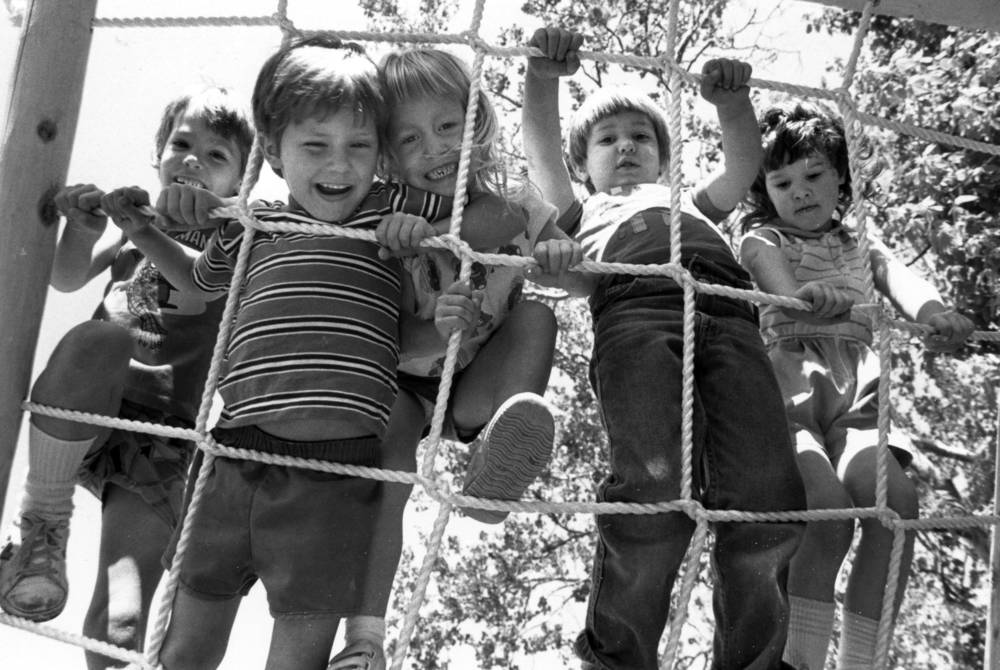 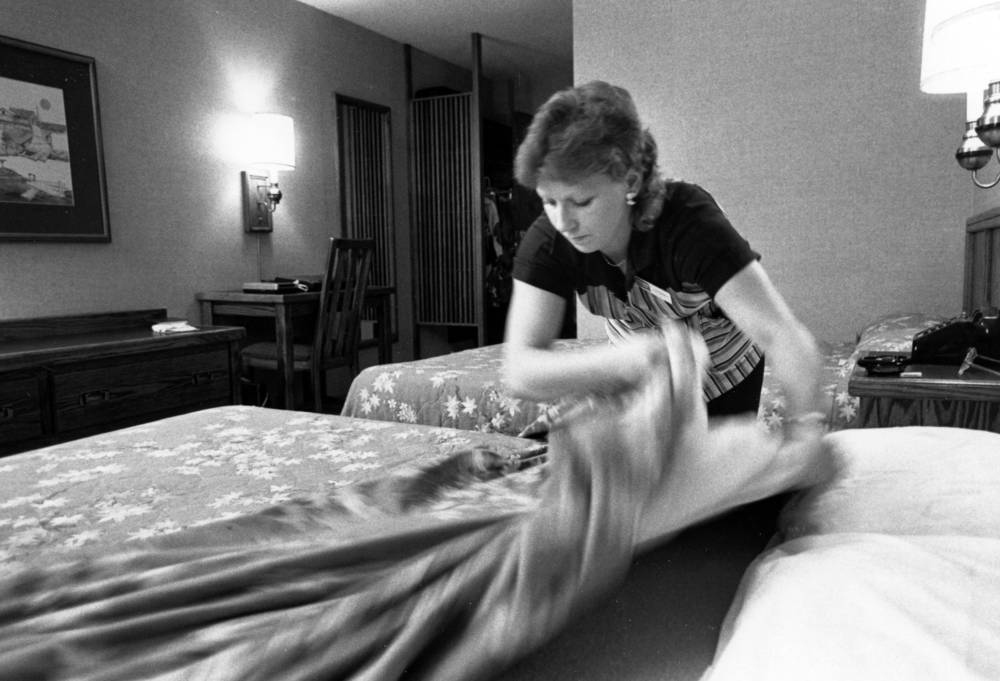 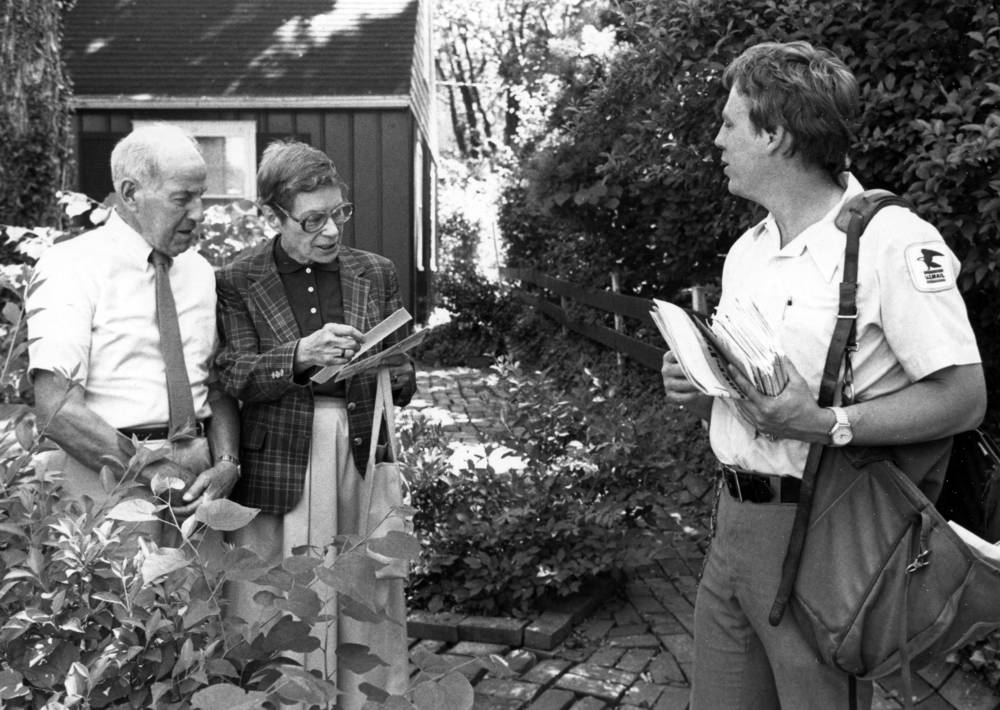 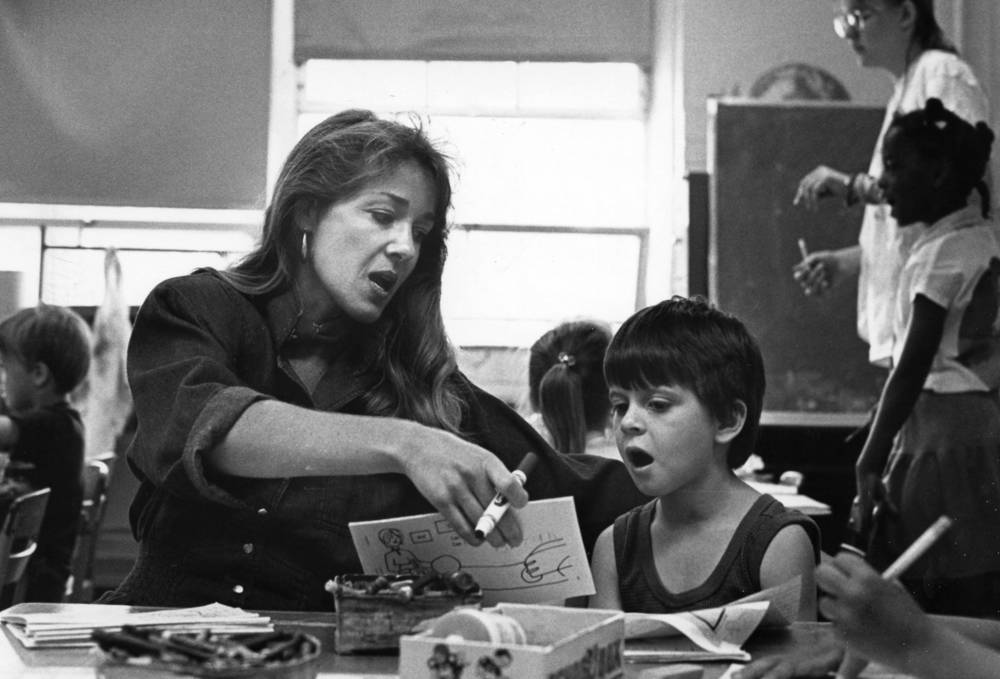 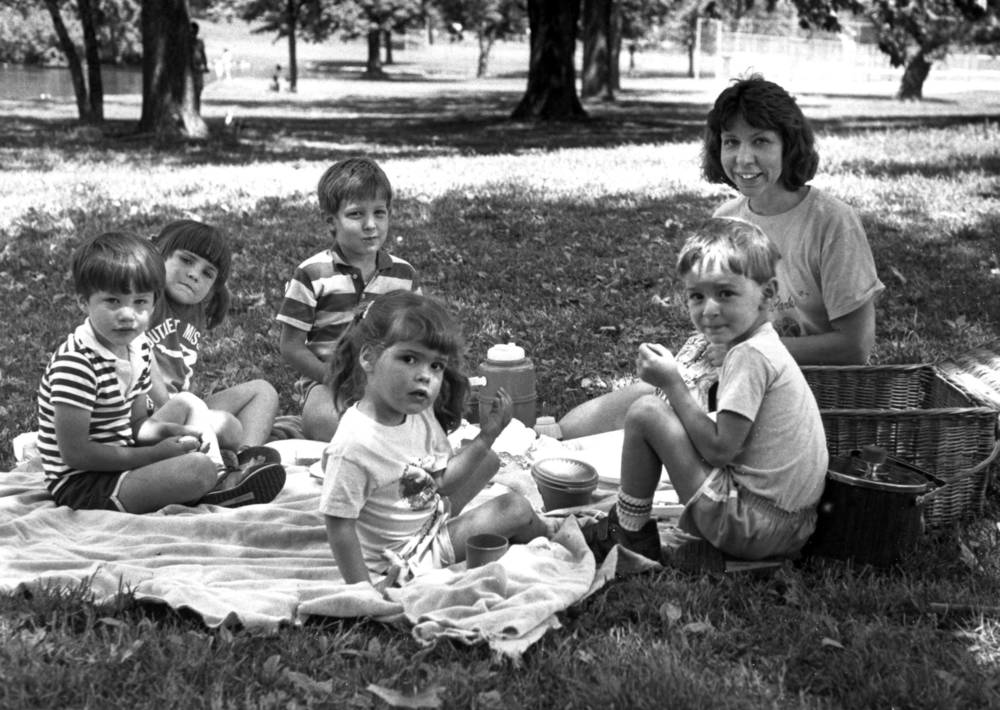 Mary Ostendorf, her son, and the children she babysits, enjoy a picnic at Capaha Park at 12:15 a.m. (Margaret Ostendorf photo)

COMING: Scenes in the afternoon and evening from "A Day in the Life of Cape Girardeau."